Live your life in slow motion with the Decelerator Helmet

Share All sharing options for: Live your life in slow motion with the Decelerator Helmet

German artist Lorenz Potthast has developed an experimental helmet that allows users to perceive their surroundings in slow motion. Known as the Decelerator Helmet, Potthast's apparatus is a reflective aluminum sphere that completely covers a user's head. The outside world is viewable only through an interior head-mounted display placed directly in front of a user's eyes, which beams video captured by a camera attached to the front of the helmet. Users can control the speed of this video using a handheld, semi-spherical remote, allowing them to slow down the world as they see fit.

Become aware of your own time

Specifically, the remote offers three different viewing modes — auto, press, and scroll. In auto mode, the video is automatically slowed down and sped up after a pre-defined time interval, while press mode allows users to decelerate the video at precise moments. Scroll mode, on the other hand, offers complete control over video speed, as demonstrated in the video below. The images displayed to the user are also mirrored on a monitor attached to the front of the apparatus, giving outsiders an idea of the helmet's function. 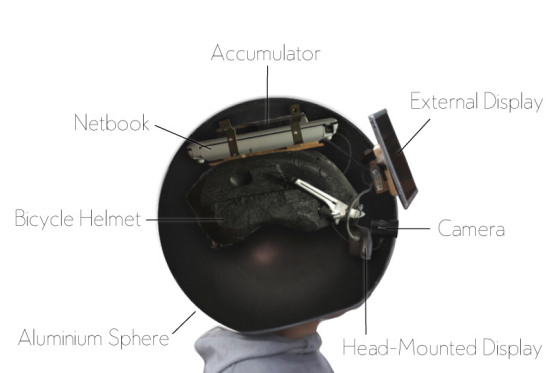 In practice, it seems this distortion would pose some obvious dangers, since users would effectively be operating on a constant time delay. But Potthast says the Decelerator Helmet is more of a conceptual exercise than anything else — an "experimental approach for dealing with our fast moving society." As technology continues to accelerate the rate at which we receive information and experience, Potthast's project forces wearers to "decouple" personal perception from reality, thereby allowing them to "become aware of [their] own time."