Share All sharing options for: Redefining the art of self-portraits with a CT scanner and 3D printer

A Dutch sculptor has created a series of 3D-printed reproductions of his own body parts. Caspar Berger scanned his entire body in an advanced CT scanner to create a pixel-perfect 3D map of his skeleton before using a 3D printer to produce a series of sculpted self-portraits.

"A self-portrait that has not been made by the artist."

With Self-portrait 21, Berger sent his 3D printed skull to a forensic anthropologist, who "received the skull anonymously accompanied only by the information that it belonged to a man in his mid-40s born in Western Europe. The anthropologist then used clay reconstruction methods to recreate the artist's muscles, tissue, and skin structure, creating an accurate portrait without knowledge of what the subject looks like. Berger had his reconstructed visage cast in bronze, and describes Self-portrait 21 as a "self-portrait that has not been made by the artist." 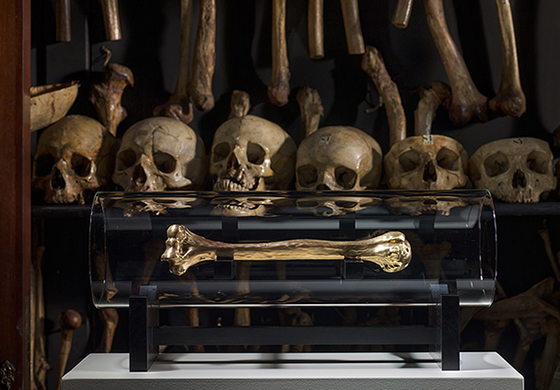 As the number 21 suggests, Berger has sculpted many other works, including a humerus (the upper bone in your arm) that, after being CT scanned, was cast using three kilograms of gold — a technique he uses in his Vera Icon series to great effect. You can see some of Berger's processes in a video released by the artist last month.