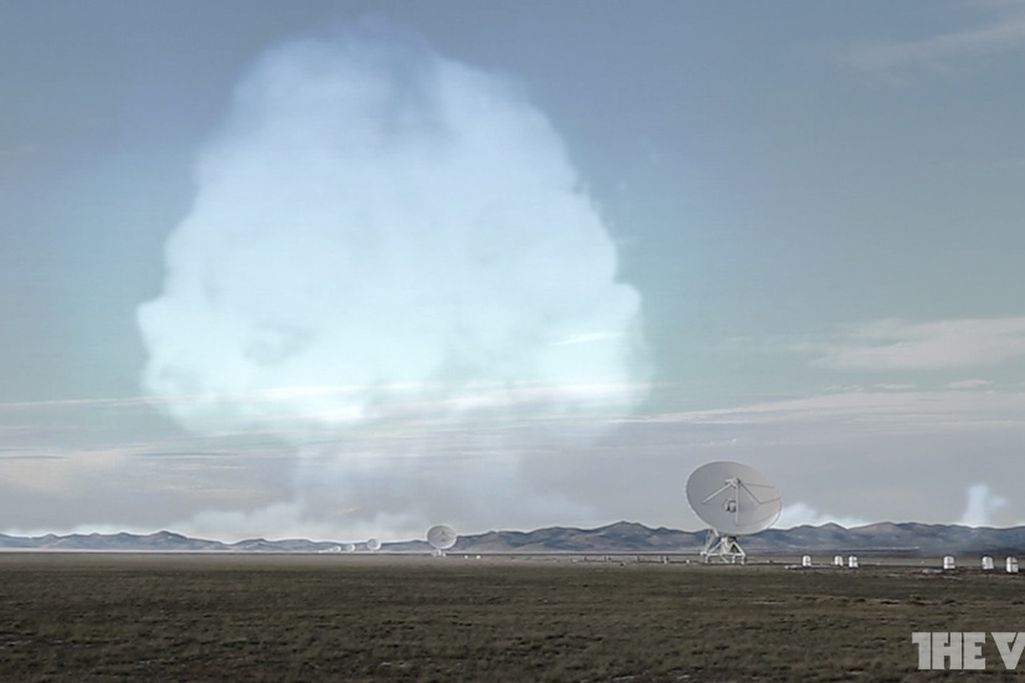 Taken as a story of human achievement, and human blindness, the discoveries in the sciences are among the great epics. — Robert Oppenheimer

In the telling it has the contours of a creation myth: At a time of great evil and great terror, a small group of scientists, among the world’s greatest minds, secluded themselves in the desert. In secrecy and silence they toiled at their Promethean task. They sought the ultimate weapon, one of such great power as to end not just their war, but all war. They hoped their work would salvage the future. They feared it could end everything.

In the cold, rainy dark of a summer morning they readied themselves, gathered in the sand at the edge of terra incognita. Their “gadget,” so diminutively named, waited in the distance: a large metal sphere studded with wires, perched atop a tall, steel tower. A countdown began. The scientists had begun a betting pool about the device’s power, or whether it would detonate at all. One wagered whether the gadget would ignite the atmosphere. Others applied suntan lotion.

At 5:29:45 AM the time came. A light greater than the sun lit the desolate mesa and mountains in hues of gold, purple, violet, gray, and blue. The shockwave rolled out and over the landscape; moments later and miles away, the scientists felt the heat against their faces. A blind woman 150 miles north of the blast asked, “What’s that brilliant light?” Beneath the cloud, molten sand rained back to earth. It coated the ground, cooling to glassy, translucent green.

Soon after, the sun rose over the desert.

That was nearly 70 years ago, on July 16, 1945, just south of Socorro, New Mexico. At the Trinity nuclear test site, a newly risen, man-made sun marked the beginning of the atomic age, with all its newfound terrors and wonders. The bombs that destroyed Hiroshima and Nagasaki killed over 150,000 people. Japan surrendered soon after, though historians still debate the effect of the bombings.

By then the Cold War had begun, as the Soviet Union pursued its own nuclear ambitions. The weapon some in the Manhattan Project hoped would end all wars became the impetus behind a decades-long arms race, with the world’s dueling superpowers locked in the embrace of Mutually Assured Destruction.

The Trinity test has become synonymous with Robert Oppenheimer’s recollection that at the moment of truth his mind flashed on a line from the Bhagavad Gita: Vishnu saying, "Now I am become Death, the destroyer of worlds." An earthier analysis came from Ken Bainbridge. A fellow physicist, Bainbridge had directed the test. Less inclined than Oppenheimer to flights of grandiosity, he declared, "Now we are all sons of bitches." Even in the heady seconds after they’d done it, the men at Trinity realized they’d become destroyer-gods or simple sons-of-bitches — or both. They had unlocked a primal force in what Bainbridge called "a foul and awesome display." And nothing could ever be the same. 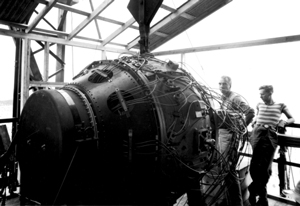 The "gadget" in the Trinity Test Site tower awaiting detonation, 1945. 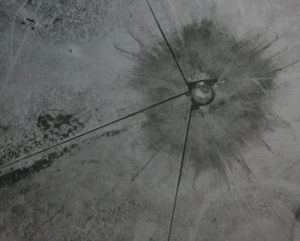 An aerial photograph after the detonation. 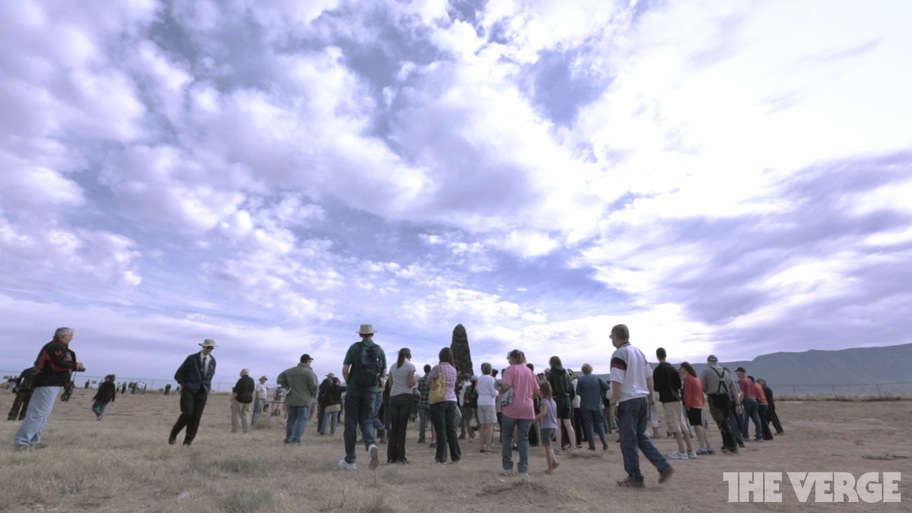 Today you can stand at ground zero and try to imagine what future those men saw in the baleful column of smoke and fire swelling up before them. On two Saturdays a year, in April and October, the White Sands Missile Range opens the site to the public.

It’s not much to see. Long before it became a military facility, the Spanish called this unforgiving expanse Jornada del Muerto — the "Journey of the Dead Man." It’s flat and rocky, with intermittent patches of desert grass. A chainlink fence encircles the site, hung with historical photos documenting the Manhattan Project and test. A rectangular shelter protects part of the crater; a piece of metal footing from the test tower reaches raggedly from the ground. On a trailer bed sits the shell of a Fat Man-style bomb, like the one derived from the gadget and dropped on Nagasaki. It lies inert, vaguely comical once stripped of its atomic heart.

Evidence of the blast, including a crater ten feet deep and a thousand feet wide, is mostly gone, erased by bulldozers in 1952, though picking through the sand you can still find nuggets of Trinitite, the irradiated green glass produced by the explosion. In the absence of a crater stands a black stone obelisk. On it a plaque reads, "Trinity Site: where the world’s first nuclear device was exploded on July 16, 1945."

On a warm October morning people mill about, gravitating toward the obelisk before settling into their own orbits. A circle forms around the black stone. People dash in to have their pictures taken next to it, then dash out to make room for the next. In this way they’ll join their personal history to that of the bomb, mark the moment they stood at ground zero among the ping and click of radiation detectors.

There are children and teenagers, Boy Scouts and veterans, self-proclaimed geeks who’ve come from around the country to see this patch of vacant earth. A woman narrates over a loudspeaker, telling her tour group how William L. Laurence, correspondent for the New York Times, wrote of Trinity’s moment of truth: "On that moment hung eternity. Time stood still. Space contracted to a pinpoint." A small dog scrabbles through the dust, seemingly convinced he’s found a very important rock. 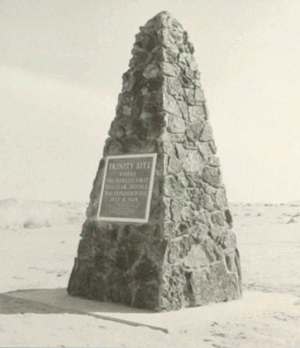 The obelisk sits at ground zero. 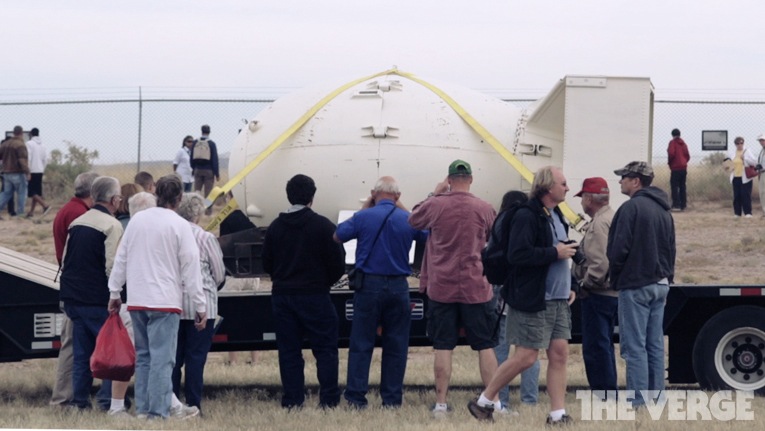 Buses arrive and depart, some carrying visitors to the nearby MacDonald Ranch House. There the bomb was assembled; despite being just two miles from the test site, the house received little damage. Today it’s been restored to its 1945 state, with small placards explaining how each room was used. People wander through like a crowd of dislocated house-hunters, browsing their way through the absent past.

Someone later comments on the somberness of the place, as though it were a memorial or a tomb. Yet standing in that unremarkable stretch of desert it’s hard to know what should be mourned — or who. It would be different to stand in Nagasaki, with the tragedy there all too apparent. But there’s something harder to grasp here, an immensity beyond chronology. From the distance of seventy years, the atomic test seems less a part of history than the beginning of it, some epochal gateway that, once passed through, grows opaque.

Maybe it’s merely the half-life of history. Most of the people who come here are natives of the atomic age, born into it as fish is born into water and just as incapable of imagining otherwise. The lived experience of a pre-atomic age dwindles and winks out; similarly, the world-changing events of our own time will recede into simplicity, come to seem inevitable. Creation myths for the next age.

So you stand in the barren landscape, among the scouring sand and try to reconcile all that emptiness with the story of what happened here: "Trinity Site: where the world’s first nuclear device was exploded on July 16, 1945." The bomb proliferates. By the moment of the test another, simpler type of gadget was already loaded on a ship, destined for Hiroshima. Twice it was used in war, followed by innumerable tests. It spread to enemies and allies, diffused without being defused. And wondering where it will go next, you find yourself staring into the glare of the future, as blind as the men at Trinity, shielding their eyes from the white-hot fires of the sun they’d made. 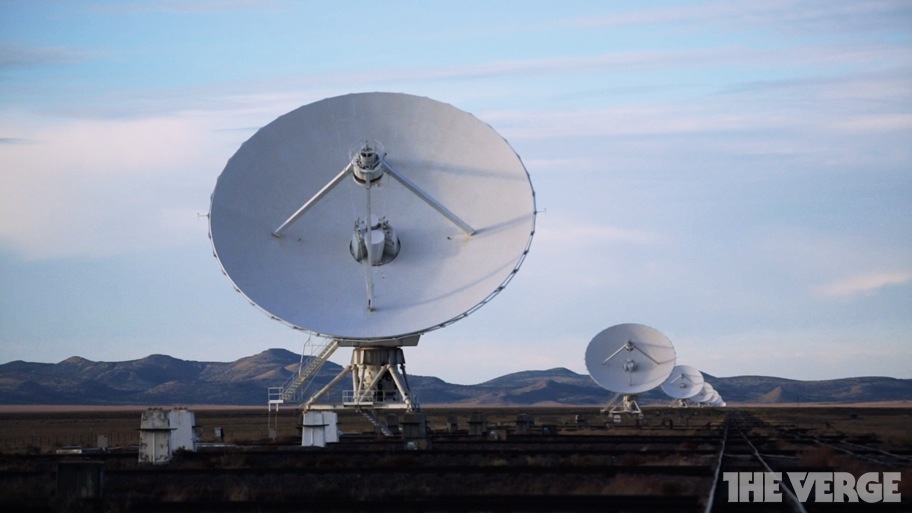 Heading west from the Trinity site carries you across New Mexico’s flat and sere terrain, the white sunlight imbuing everything with an otherworldly clarity. One of the largest and least populous states, it averages barely 17 people per square mile. Outside of the major population centers, the land takes on a prehistoric cast. You can imagine returning in a thousand years and finding everything much as when you left.

About two hours’ drive west of Trinity, Highway 60 begins a slow climb. At 7,000 feet it reaches a plateau ringed with mountains. As you approach, you notice small, white installations on the horizon. The distance and the lack of human-sized landmarks make it difficult to recognize them at first, but you’re right in the middle of another large, government-sponsored science project. One devoted not to splitting the atom, but exploring the stars.

Each of those white shapes is a 230-ton radio telescope, 28-meters in diameter. There are 27 of them spread across the plateau, their dishes pointed toward the heavens. For a disorienting moment they look like alien artifacts, some vast and inscrutable remnant of a lost civilization. But then you recognize the train tracks connecting them.

This is the Very Large Array. Completed in 1980, it’s a collection of antennas that, working in conjunction and with the help of some computerized number crunching, function as one of the world’s largest radio telescopes. It’s also one of the most widely used, operating 362 days out of the year and sending data to researchers around the world via the internet. In the four decades since its completion, it has become an iconic example of science on the very largest scale, appearing in films such as Contact and Transformers: Dark of the Moon. In something of a backhanded compliment, it even showed up as a Skynet facility in Terminator Salvation. 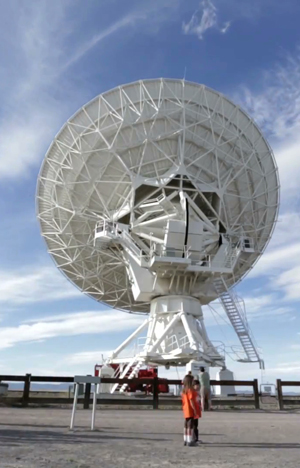 The VLA captures the imagination in much the same way as Trinity, but without the latter’s dubious legacy. If Trinity represents an omega point of applied science — the almost inevitable outcome of work hypothesized by Fermi and Szilard, warned of by Einstein, and executed by Oppenheimer and his fellows — the Very Large Array epitomizes pure science, motivated only by inexhaustible curiosity. Yet that curiosity, that yearning to better know the world around us, produced a scientific apparatus unique in the world.

Why do it? It’s a question we keep asking, especially when it comes time to consider budgets, to assess national priorities. The bomb, it’s been argued, ended a war. What does the VLA do? "Research is like a window to the future. It opens up new things," says Rick Perley, a National Radio Astronomy Observatory astronomer. "It is also by doing this kind of research we inspire the next generation — not necessarily to do astronomy or physics — but into exploring their curiosity, to understand their environment." To be curious. To be attentive. To think.

To visit both of these sites in a single day, to stand at Trinity and feel as a small, involuntary participant in the nightmare of history and then, hours later, to stand among the antennas of the VLA and feel that, despite its myriad flaws and foibles, mankind is still capable of great feats of inspiration — well, it’s not just the thinner air at 7,000 feet that makes you a bit lightheaded. It’s the sense that in the desert sands of New Mexico, yes, there are craters where our past is dimly visible but not forgotten, and, better still, places where our future is still being made.