Saturday marked the 129th installment of Harvard-Yale, one of college football's most storied rivalries. Known simply as "The Game," the Ivy League series dates all the way back to 1875, and although its national significance has waned with the rise of power conferences and the Bowl Championship Series, it never fails to inspire memorable pranks and frat boy stunts. Yet few are as audacious as what a group of MIT pranksters pulled off 30 years ago, when a mysterious weather balloon suddenly emerged from beneath the field at Harvard Stadium.

On November 20th, 1982, during the second quarter, a black weather balloon inexplicably began inflating along the sidelines, just above the 45-yard line. As referees and coaches gathered in befuddlement, the balloon suddenly exploded to roars of applause, leaving only a cloud of white dust in its wake. Emblazoned with the letters "MIT," the balloon left no confusion as to authorship, with the Delta Kappa Epsilon fraternity immediately taking credit for the stunt and heralding it as an unmitigated success.

As the frat later explained, the prank was part of an operation that had been in the works for several years. The balloon was inflated by a freon-driven hydraulic press buried three feet below the ground, and was powered by a vacuum cleaner motor. Members of the house's "Bomb Squad" planted the device a few days before the game, making eight trips to the stadium during the dead of night. The students were confident that the explosion would cause no bodily harm since it contained only freon, and were courteous enough to attach a note explaining how to properly clean it up. 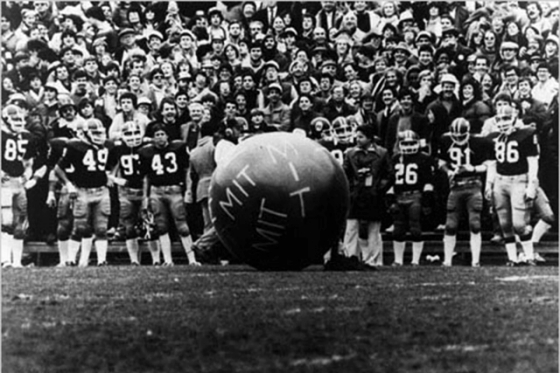 Looking back at the incident three decades later, what's perhaps most stunning isn't the prank itself, but the general reaction to it. As Computerworld points out, in a post-9/11 world, this kind of on-field demonstration would've likely been quashed with SWAT teams and bomb-sniffing dogs. In 1982, it was only met with a few pulled police pistols and general amusement, as demonstrated in the compilation of lighthearted media reports below. The frat even held its own press conference afterward, where they boasted about successfully eluding Harvard security workers. And although Harvard would go on to win 45-7, a headline in the next morning's Boston Herald captured The Game's greatest highlight : "MIT 1—Harvard-Yale 0: Tech Pranksters Steal the Show."