Sony's latest ploy to keep your phone in your pocket

Sony has released perhaps its biggest update yet to the PlayStation Vita. Apart from coming with support for PlayStation Plus on the handheld, firmware version 2.0 adds an email client along with improvements to the browser and several other new features.

Email is below par next to a modern smartphone

The email app, simply called Email, is unsurprisingly below par next to what you'd expect from a modern smartphone. It's easy enough to use, with automatic setup for Gmail and Yahoo Mail accounts; one nice feature is that you can add multiple accounts, which is more than we can say for the Gmail app on iOS at least. However, it lacks basic features such as conversation threading and Gmail archiving, and of course there aren't any push notifications, though you can set it to check in the background every 15 minutes. We can't say we're huge fans of the faux-envelope paper visual design, either, which doesn't make great use of the Vita's 5-inch screen. Still, if you somehow find yourself in a situation where you need to fire off a quick message and you only have your Vita on you, it'll be a lot less painful than muddling through the browser. 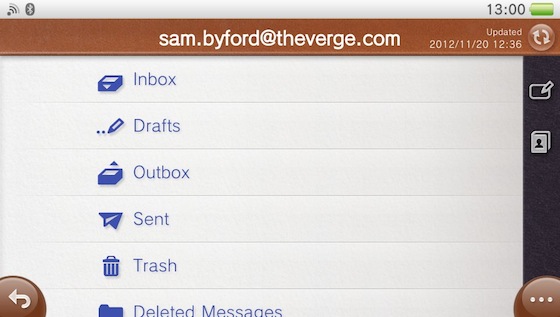 Speaking of the browser, it's gotten a performance upgrade in this update which does improve the experience somewhat. Again, it's still not on the same level as the phone you probably have in your pocket — HTML5 videos don't work, nor do the custom fonts on The Verge — but page loading feels snappier and there's a lot less checkerboarding when scrolling around a site. You're also now able to use the browser without having to close your game in progress, making it potentially useful for looking up hints and such. The proportion of Vita owners that don't also own a smartphone is surely low, but the browser is fairly solid nonetheless and certainly usable in a pinch. 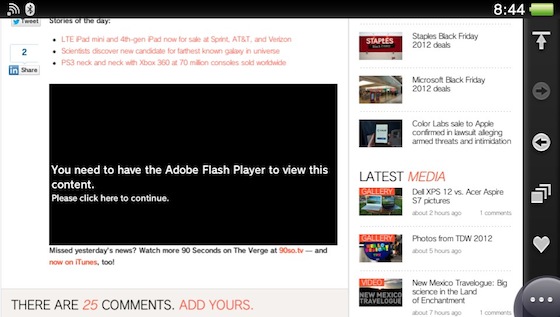 Elsewhere, the incomprehensible location-based social networking app Near has received an interface overhaul that seems to make it a lot more accessible, the Maps app now shows weather information, and there are new granular notification settings that give you more control over the alerts you receive. Another useful feature is the ability to sync with the PC Content Manager app over Wi-Fi, which saves you searching for the system's proprietary cable. Overall this is a good update for the Vita, and the PlayStation Plus integration makes it a more appealing buy than ever — we just wonder what Sony's support will do to help flagging sales.