Microsoft's Windows 8 Start screen UI wasn't shown off fully until mid-2011, but the company is now starting to show off mockups of how the software maker envisioned it back in 2010. Jensen Harris, part of Microsoft's Windows design team, shared some of the concepts in an hour-long presentation on Windows 8 for UX Week recently.

Spotted by Long Zheng, the mockups offer an early look at how Microsoft approached the design of Windows 8. A Start screen mockup shows off a cluttered looking Live Tile interface, with the time, date, and network / battery status shown clearly at the top of the display. Other mockups include a charms bar with additional icons for favorites, snap view, and a media player. 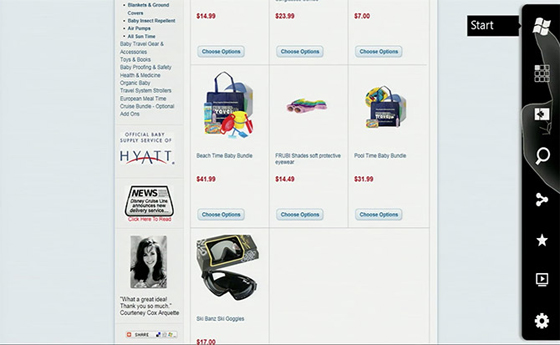 Throughout the presentation, Harris discusses Microsoft's approach to "reimaginging" Windows. At one point he briefly discusses the calendar and find my friends apps from iOS that include a fake leather look, describing them as "cheesy visual effects." Harris argues that Microsoft now cares about every detail, even forcing the development team to fix a blue flash at logon to make Windows 8 more visually appealing.

For all the work the company has put into its latest version of Windows, Microsoft now has to prove it will sell. Early reports suggest that Windows 8 is off to a slow start, missing internal projections, but it's clear that Microsoft won't halt until its $1 billion marketing budget is complete.