Since cellphones became ubiquitous, cities have been looking for ways to give new life to underused pay phones. Today, a pilot program is beginning to test one option: replacing the phones with touchscreens that can provide information about the surrounding area. The first two screens launched around Union Square, with two more opening tomorrow. Eventually, 250 are planned for installation in the next few months, and they may start showing up in more cities if the plan is a success. The kiosks are free and ad-supported, and a portion of revenue will go back into the city coffers. But are they worth using? We took a look at one to find out.

Electronic information kiosks aren't new, but the rise of small, self-contained apps seems like it could make them more useful than ever. Unfortunately, this one suffers from an overabundance of disorganized content. The app you'll see pulls data from CityMaps, Foursquare, Zagat, and other sources, but there's little attempt to tie it all together — instead, you'll get a jumbled collection of restaurants, bars, events, public safety information, and links to other apps. The data is quite useful, but the piecemeal layout and lack of a consistent design language makes it unintuitive. I counted at least three different mapping systems, for example, but none of them seemed to offer transit or driving directions, an obvious feature for tourists. Likewise, while most sections let you look up a mentioned location on Google Maps, not all do. 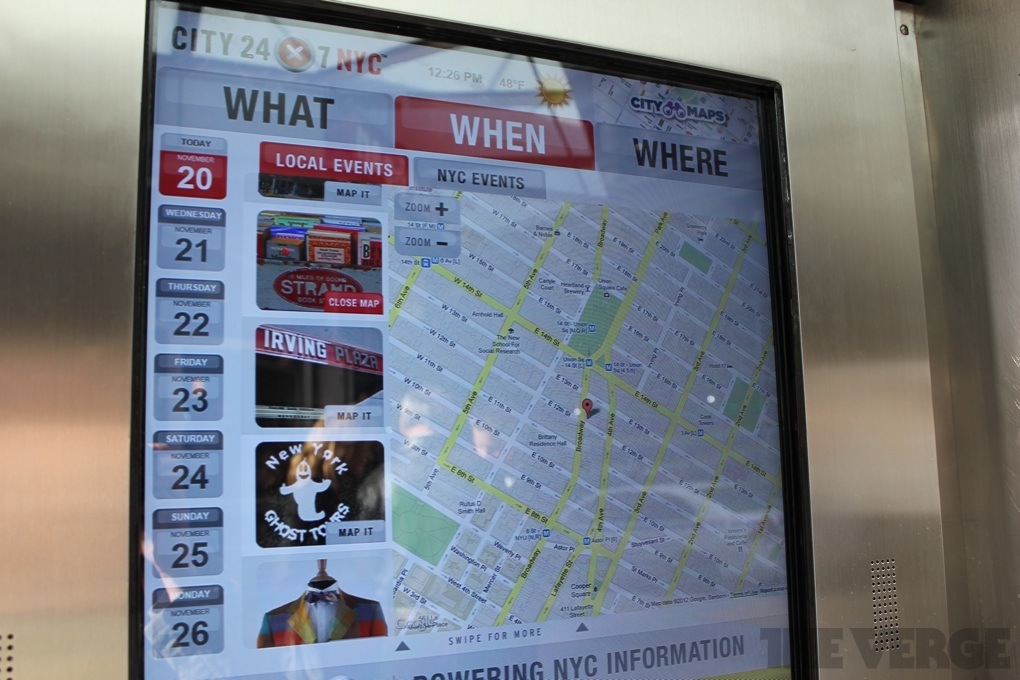 Some of the more interesting features are yet to come

The system itself has potential, but it's also far from perfect. The screen is big and fairly bright, with on-screen contrast and accessibility buttons. Generally, the top half displays app content, and the bottom half is dedicated to advertisements or service advisories; if you're in a wheelchair, you can opt to swap the two for easier viewing. The screen will instantly display your touches with a translucent circle, which turns out to be vital feedback, since the app is painfully laggy.

The program is still young, and some of the more interesting features are yet to come. A camera will be installed later, allowing the kiosk to detect people with seeing eye dogs or canes and switch to a voice-based mode. While it wasn't online today, there's also a Wi-Fi hotspot, and we heard previously that Skype and email will eventually be supported, making the kiosk surprisingly full-featured. For now, there's plenty of information, and it'll likely be useful to tourists or people who want to get a quick look at a map. We just wish more effort had been put into laying that information out to the best effect.