A shining symbol of print media lives on, for now

Plop. A pile of vibrantly colorful pages lands on the doorstep, easily weighing a pound or more. Calling it a "newspaper" doesn't actually seem to do it justice.

It's a time-tested tradition

For millions of Americans, the arrival of the Thanksgiving Edition of their local rag is a time-tested tradition — a veritable bible for planning the following day's Black Friday strategy, stacked hilariously deep with ads, circulars, and mini-catalogs from dozens of brick-and-mortar retailers. How cheap are Walmart's big screen televisions? What are the doorbusters at Radio Shack? Should we stop at Kohl's first for this $9.99 Crock-Pot? Must we get up at 4AM and subject ourselves to this madness?

Of course, thanks to Kindles, iPads, and PCs — pretty much anything that can connect to the internet — it's no secret that the printed newspaper's days are numbered. From the New York Times to the New Orleans Times-Picayune to the smallest neighborhood daily, print circulation is on the decline; publishers are looking to go digital and trim the fat wherever they can. Thanksgiving Editions, sometimes hundreds of pages larger than the average weekday paper, would seem to be on the ropes.

The issue of The Detroit News that just landed on my family's porch, though, tells a decidedly different story. It's huge.

"We normally sell two to three times as many copies as we do on a 'normal' Thursday."

"We have 41 inserts... our page count, including those inserts equal over 425 pages," says Keith Foutz, operations director for Western Communications, of The Bend Bulletin's Thanksgiving paper. "We normally sell two to three times as many copies as we do on a 'normal' Thursday." According to figures from the Oregon Newspaper Publishers Association, that would put total circulation today somewhere between 55,000 and 82,000 — not bad for a city of around 80,000 residents. 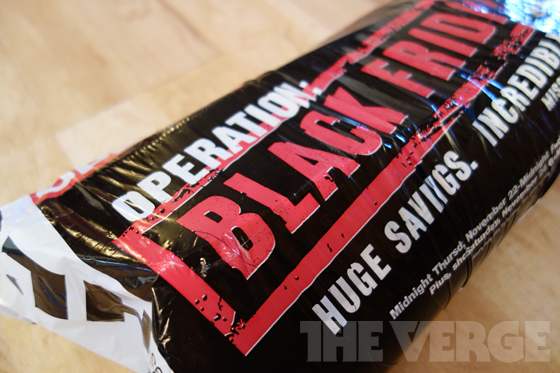 Billy Towler, manager of advertising operations for Virginia's Daily Press, tells a similar story: "Our total pieces inserted for 2012 was up from last year's volume," he says. "There was increase in new advertisers this year as compared to last year." The Press covers Hampton Roads, an eastern region of the state that includes Norfolk and Virginia Beach.

Obviously, a single issue chock full of advertisements (and thus, advertising dollars) isn't enough to save a dying breed. You've undoubtedly seen hundreds of web ads, promotional emails, and deal alerts over the past few days for online retailers — indeed, the so-called Cyber Monday online shopping extravaganza has already eclipsed Black Friday in revenue to the tune of $435 million last year, according to comScore. Electronics stalwart Best Buy, a mainstay of the Thanksgiving Edition, is struggling to stay relevant in the face of fierce competition and deep discounting from Amazon (not to mention our collective desire to shop in our pajamas).

For the moment, Black Friday is still very much a thing

But for the moment, Black Friday is still very much a thing, and odds are good that members of your family (and possibly you, too) are mapping out their plans for canvassing your town's shopping district at some ungodly hour of the night. And they're probably using a giant, heavy, unwieldy bundle of smelly, dirty paper to do it. When displays finally replace the very last printed newspaper in America a few decades or centuries from now, don't be surprised if our beloved Thanksgiving Edition is the last to go.