Football on Thanksgiving: a tradition (basically) as old as time

Football on Thanksgiving: a tradition (basically) as old as time

We may call it 'Turkey Day,' but the NFL is today's main event

Football on Thanksgiving isn't quite as old as Thanksgiving itself, but it’s been a part of the holiday for a long time. It started with high school and college teams, which played championships on the holiday — when no one's at work and many former locals are back in town, rousing a crowd for a football game is an easy proposition. Professional leagues dabbled with the same idea, and even the NFL started playing on Thanksgiving in 1920, but during the turmoil of that decade — leagues came and went, teams moved and changed their names — nothing really stuck.

But when George A. Richards purchased the Portsmouth Spartans in 1934, moved the franchise to Detroit and renamed it the Lions, he decided to try Thanksgiving again. The Lions were one of the best teams in the NFL that year, believe it or not, but attendance was still low — his stadium was less than half full most games. So Richards decided to hold a game on Thanksgiving, hoping to drum some up some interest from locals who'd rather watch football than spend time with their family. They came in droves, with more than 26,000 people booking tickets weeks in advance of the game — thousands more were apparently turned away at the gate because the stadium was full, forcing them to go back and face their families once again. The Lions lost a bitter, close game 19-16 to the Chicago Bears, who then ended the season as league champion. 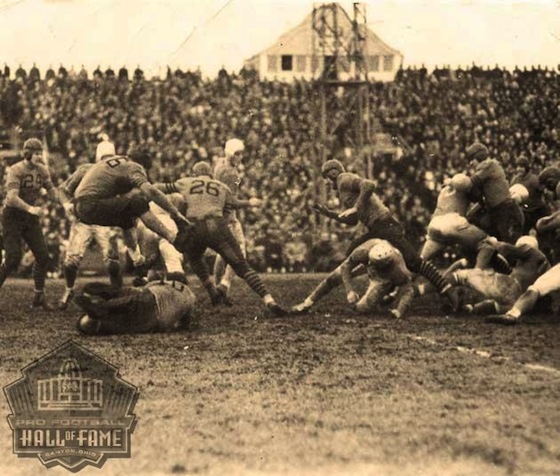 It was the most successful game in the young history of the Detroit Lions, and not just because the stadium was packed. Before purchasing the team Richards had made his money as a radio executive, and he used his clout to make a deal with NBC radio, which broadcast Graham McNamee and Don Wilson calling the game on 94 stations across the country – it was the NFL's first national radio broadcast. The trend continued, and the Lions game on the fourth Thursday in November became a national event. The team has played on Thanksgiving every year, except during World War II.

The NFL used Thanksgiving to test some remarkable new technology

31 years after that first game, the NFL took part in another media revolution. Color television had been around since 1950, but for more than a decade failed to catch on. It was too expensive to produce color TVs and color content, and broadcasters claimed for a long time to not see any demand. But in 1965, thanks to a game of one-upsmanship from the networks, color crept further onto the airwaves. And in November of 1965, CBS broadcast the Green Bay Packers and the Detroit Lions in full, living color, twelve years after the NFL first went on TV. The league was lucky to have color distracting viewers, too — the game ended in a 24-24 tie. After the success of the broadcast, commissioner Pete Rozelle wanted more of the same — football on a day other than Sunday, and in prime time — and thus was born Monday Night Football, live and in color beginning in 1970.

The NFL noticed the success Detroit was having with its annual Thanksgiving game — football ratings were exploding, and the Thanksgiving game was a huge hit. So the league began to shop around for a second team to play on Thanksgiving. It was denied by most teams, which didn’t want to have an oddly short week so late in the season — but the Dallas Cowboys took the league up on its offer. After all, the franchise was trying to cultivate its status as "America’s team," and sought the national audience the name suggested it already had. The Cowboys scheduled their first Thanksgiving game with some trepidation, only agreeing because the league guaranteed a certain amount of revenue from the game, but Thanksgiving football is the gift that keeps on giving. The Cowboys packed more than 80,000 people into the Cotton Bowl that day, breaking its attendance record as the team handily beat the Cleveland Browns. 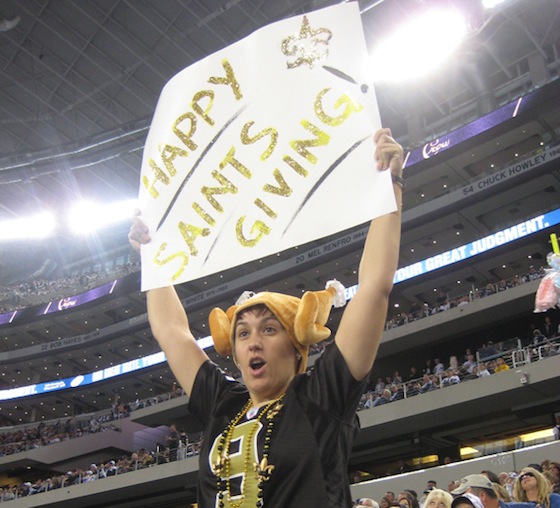 Since 1966, the Cowboys have played on Thanksgiving every year but two, 1975 and 1977. Those two years, the game was played in St. Louis, because other owners complained that the home game was an advantage for Dallas during the short week. But St. Louis couldn't sell out the games, as fans were already hooked on another tradition: the yearly battle between Kirkwood and Webster Groves. Two high school teams. TV ratings also dropped (possibly in favor of other high school football games), and the league eventually gave up and moved the game back to Dallas.

Even when they're bad, we expect Cowboys and Lions on Turkey Day

Neither Detroit nor Dallas has been very good the last several years (more than several, in Detroit's case), but both teams remain the mainstays of the Thanksgiving lineup. That's not likely to change, either, artly due to some remarkably convoluted TV deals, which give AFC rights to certain networks, NFC rights to others, and certain teams to still others. It's also surely due to the fact that the NFL tried moving the game around and it simply didn't work. In Dallas or Detroit, it does work: last year, the Packers / Lions and Cowboys / Dolphins games were the two highest-rated programs of the fall, besting every other show and even every other football game preceding it. For this year’s slate of games, NBC is charging playoff-like rates for ads, despite the fact that none of this year’s games should be anything resembling a playoff atmosphere – all three games are either irrelevant or should be blowouts.

Thanksgiving football started as a ploy, betting on both the tryptophan-induced laziness of viewers and the crucial need for time away from family time. But it's become an American tradition, as inseparable from the holiday as Santa Claus is from Christmas. It’s played a key role in bringing professional football to its now-staggering heights, too, from radio to color TV.

So if next year's game is in 3D, it might be catching on after all.