Do you like traveling? Eliminating targets? The UK government's officially-sponsored job site has the perfect opportunity waiting for you. The Secret Intelligence Service is currently looking for a Target Elimination Specialist, job code 007, "to remove people whose continued existence poses a risk to the effective conduct of public order." Should you be successful in your application, there are a number of perks to the job, including an array of passports, watches, jet packs, mini-submarines, and a Walther PPK. In case you hadn't figured it out for yourself, the job is unfortunately fake.

Although it's obviously meant as a joke, the fact that a prankster managed to complete all the necessary steps to get the clearly fictitious job advertised by the UK government is a little worrying. Registered under mi6recruitment@hotmail.com, the prankster has had the job position live on the site, and accessible via government-run UK job centers since yesterday. The job site forms part of the recently-launched Gov.uk, a one-stop shop for residents and businesses to get information on all of the government's services. The site has been heavily criticized for costing too much and having basic errors, especially in its business section. We imagine the listing will be taken down soon, but it poses yet more questions about the efficiency of the government's online push.

Update: The position has been pulled but we've saved a screenshot for your amusement. 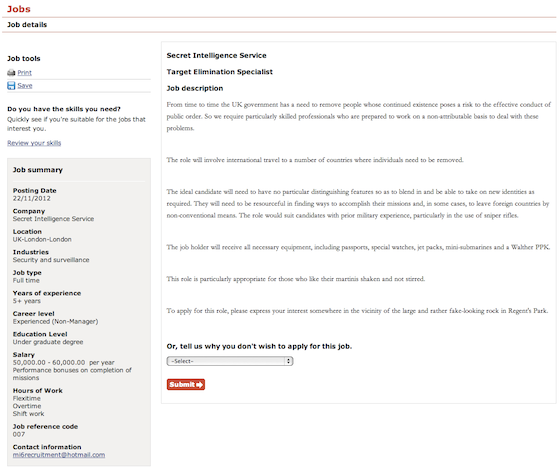