Share All sharing options for: iOS app for 'Game of Thrones' books keeps track of the characters so you don't have to

If Game of Thrones has you interested in tackling George R. R. Martin’s six-book A Song of Ice and Fire series but you’re put off by the story’s hundreds of characters and locations, there’s new hope. Mashable reports that Random House’s new iOS companion app called A World of Ice and Fire has all the maps, character biographies, and family trees you’ll need to keep the sprawl under control. 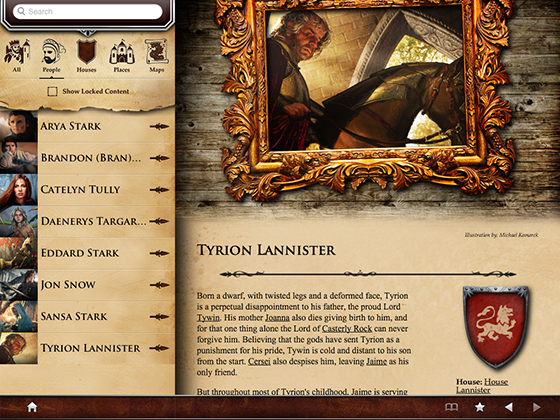 The biggest complaint about Harper Collins’s official companion app was the number of spoilers, something Random House was careful to avoid with A World of Ice and Fire. The first thing you’re shown when you open the app is a Books Read menu that sets just how much information the app can divulge. You can also jump to the iBooks store from here to shop for books in the series if you don't already have them.

The app is a free download, which gives you the two main maps and biographies for the books' eight main characters. Additional sections for each book in the series are then available as in-app purchases for $0.99 each, but if you’re planning to read the whole six-volume set, t’s probably better to lay out the $4.99 up front for the whole series. The app will be available on Tuesday (November 27th) on both iPhone and iPad, but Mashable reports an Android app is on its way to Nook (and presumably other) tablets in the near future.