Abu Dhabi will soon play host to the world’s largest man-made sculpture, constructed entirely from oil barrels. The 492-foot-tall structure — dubbed The Mastaba and independently financed with $340 million — will be built 100 miles from Abu Dhabi in the Al Gharbia region using 410,000 multi-colored barrels. An array of reds and yellows will be used in an effort to mimic Islamic mosaics, with the sides of the structure appearing "almost full of gold" as the sun rises.

The artist behind The Mastaba, Christo, first conceived the idea over 30 years ago, but has delayed the construction due to past conflicts in the Middle East. Despite the use of oil barrels in a region famous for the commodity, Christo says that the project isn’t supposed to be a political statement of any kind. He also rejects comparisons to the pyramids, instead citing inspiration from ancient Mesopotamian mud benches. Construction will take place over 30 months, and the artist hopes that when it’s finished, around two million people per year will visit the site. 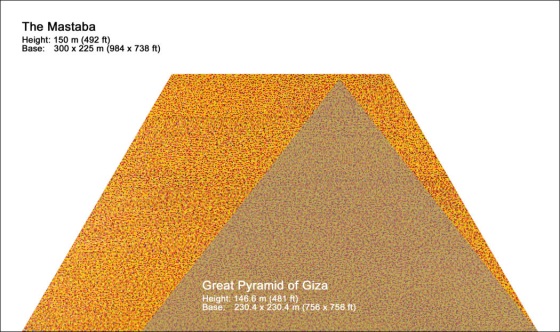