Without internet connectivity, Nintendo skates to where the puck used to be

Nintendo may have recently released a brand new console with the Wii U, but that doesn't mean that the original Wii is dead just yet. In the Wii U's first week of availability it moved 400,000 units in the US compared to 300,000 for the Wii. That's only 175,000 fewer units than the Wii sold in the US during its debut week — for whatever reason, people are still buying the thing. In an attempt to create some more interest in the seven-year-old console, Nintendo today announced the smaller, sleeker Wii Mini, with a suitably small $99.99 price tag. It's not a new strategy — all three generations of the PlayStation have seen redesigns, and Nintendo itself has seen success regularly refreshing both its handhelds and home consoles, dating back to the NES. But unlike those devices, the Wii Mini comes with some unfortunate compromises, most notably the lack of any sort of online connectivity. Instead of being a media streamer-killing Netflix box that can also play a huge library of games, the Wii Mini feels more like a missed opportunity.

While online was never as important to the Wii as it was to the PlayStation 3 and Xbox 360, the lack of any kind of connectivity still cripples the device in a number of ways, and cutting out media functionality is the biggest. In the same way that the ability to play DVDs helped sell many on the PlayStation 2, media streaming could have been a big selling point for a smaller Wii. The price tag would have made it an ideal Netflix box and a serious competitor to the likes of Apple TV and Roku. It would've lacked HD, of course, but for those who don't already have another way to stream video to their television, this might not be all that big of a concern. And considering the Wii can't play DVDs, this means that the new version has no media features whatsoever.

The decision is all the more curious when you consider the direction Nintendo has taken with the Wii U. Though it ended up being delayed until December, Nintendo TVii represents a huge step forward for the company when it comes to owning the living room. Described as a "personal programming guide," Nintendo TVii combines both live and on-demand content from a variety of sources, with a universal search function that lets you look for videos across services like Netflix, Hulu Plus, and Amazon Instant Video. There's even social features through Nintendo's Miiverse network. Meanwhile, the Wii Mini can't even stream "Gangnam Style." 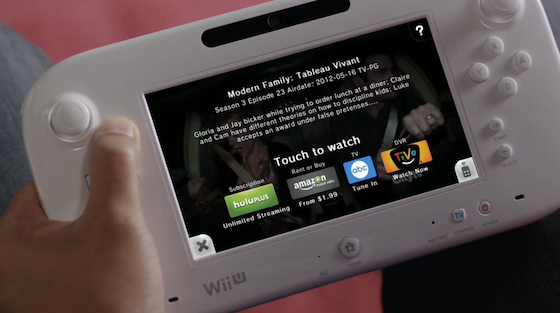 Of course, not being able to connect to the internet doesn't just impact the Wii Mini's media capabilities, it also reduces its appeal as a game console. Without the internet, you can't indulge in nostalgia by downloading classic games from the Virtual Console store and you can't play some of the system's most popular titles like Mario Kart Wii or Super Smash Bros. Brawl online with friends. The Wii may never have excelled in terms of online play or its virtual storefront, but it's hard to deny the appeal of playing Super Mario World on your big screen TV or enjoying a few laps of Mario Kart with friends across the globe. To make matters worse, the console also strips out backwards compatibility with GameCube games, further reducing the number of titles you can enjoy on it. When the Wii Mini was announced today, Nintendo said that it "puts the focus squarely on Wii games," which is true, but the company has also limited both the number of games you can play on the console and the functionality of many of those games.

The value proposition just isn't there

The timing of the Wii Mini means that Nintendo is clearly attempting to appeal to holiday shoppers with a console that's cheaper than any of its competitors. But even with the $99.99 price tag, the value proposition of the Wii Mini just isn't there. The standard version of the console recently had its price cut to $129.99, and you can regularly find the Wii bundled with a game or two for not much more than that. Is $30 really worth the extreme trade-off in functionality? Does a new look — which, admittedly, is quite nice — make up for not being to watch Netflix or play games online? And when you can get a full featured Wii — often with a game thrown in — for not much more, it makes the Wii Mini seem even less appealing, despite its good looks.

It's somewhat baffling that in 2012 — the same year that it seemed the company might finally be making some progress with its online offerings through the Wii U — Nintendo would release a console that can't connect to the internet. Whether you're playing games in the living room, on a computer, or on your phone or tablet, online is now an expected feature. There's really no reason why it shouldn't be present in the Wii Mini, apart from Nintendo's reputation for bucking industry trends (its ignorance of the massive smartphone gaming market, lack of HD support on the Wii, the list goes on).

Online is an expected feature

The lack of online isn't the only strange thing about the latest addition to the Wii family, though — for some reason it's only coming out in Canada. According to Nintendo, there's currently "no information" about its "potential availability in other territories in the future." Maybe the company doesn't have enough faith in the product for a more widespread release. Maybe Canadians (like me!) just hate the internet. Maybe Canada will serve as a testbed, and depending on the Wii Mini's success up North we could see it reach other countries in the future. But I'm not sure that will end up happening.

When the Wii U launched, Nintendo of America President Reggie Fils-Aime called it "a living and breathing system." The Wii Mini, on the other hand, might just leave internet-starved gamers gasping for air.