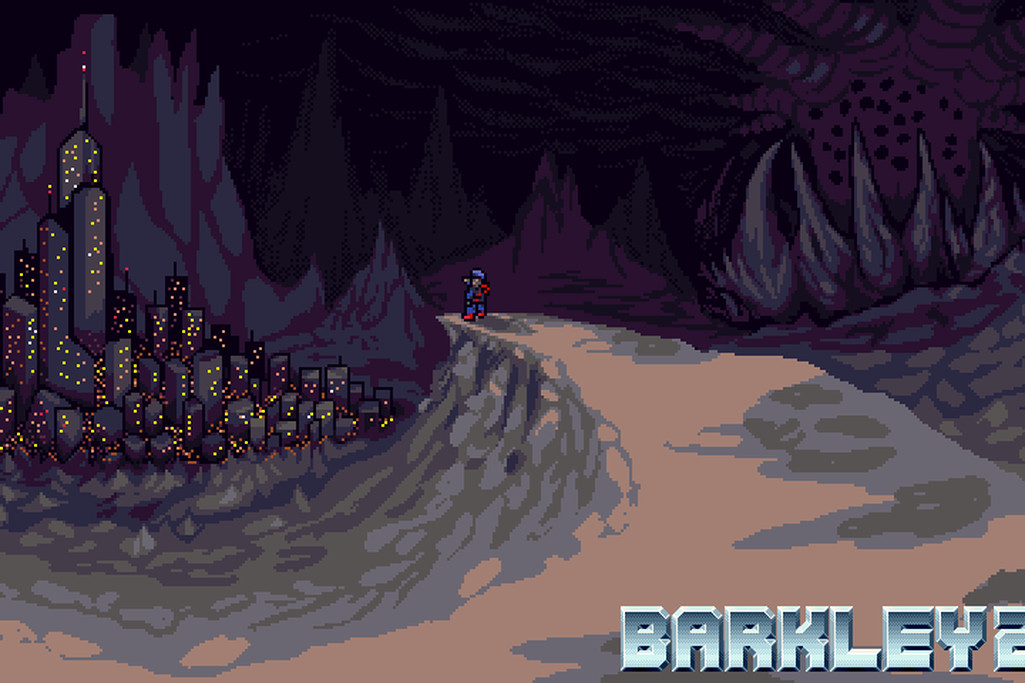 “One day I just saw the words Barkley Shut Up and Jam — I’d never played the game before, and I still haven’t played the game — and I just thought it would be really, really funny if the word ‘gaiden’ was at the end of that,” says Tale of Game’s Studios’ Eric Shumaker. “I really didn’t give it much thought.”

And that's how development of one of the most ridiculous video games ever began. Released as a freeware title in 2008, Barkley, Shut Up and Jam: Gaiden is a post-apocalyptic role playing game set in a future where basketball is illegal, and the sport’s stars are hunted down as outlaws. Charles Barkley is a fugitive, Lebron James is a ghost, Vince Carter is a cyborg, and Michael Jordan has switched sides to become head of the B-Ball Removal Department. The game managed to strike a chord with players thanks largely to its sheer dedication to such a ridiculous premise, and now the team at Tale of Game’s is working a sequel. They aren’t skimping on the crazy. 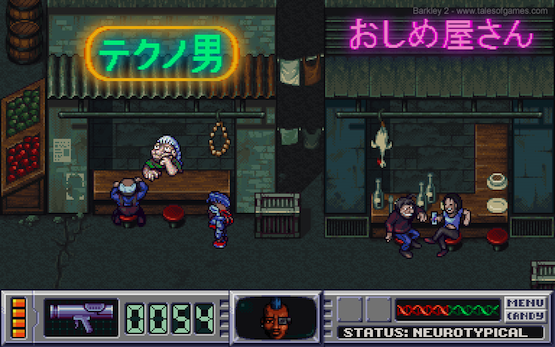 Barkley 2 — or, to give it its full name, The Magical Realms of Tír na nÓg: Escape from Necron 7 – Revenge of Cuchulainn: The Official Game of the Movie – Chapter 2 of the Hoopz Barkley SaGa — switches the formula up quite a bit. As opposed to a Japanese-style turn-based RPG in the vein of the original Final Fantasy titles, Barkley 2 is an action role-playing game. "That’s because it focuses on the story of one character, and turn-based games with just one character are really bad," says Shumaker. "So we wanted to make a really fun system that also sort of meshed with the story."

And while that game doesn’t appear to be loaded with NBA stars past and present this time, its story isn’t any less ridiculous. In fact, Tale of Game’s may have actually made things even stranger. Here’s the studio’s description:

The year is 666X. A powerful youngster, wise beyond his years, awakens from a B-Ball induced coma aboard the mysterious dwarf space ziggurat Necron 7, held captive by the Malevolent A.I. Cuchulainn. With no memory of who he is or where he came from, he adopts the identity of X114JAM9 and sets off into the Post-Cyberpocalyptic Wasteland in search of the enigmatic Cyberdwarf, the only one who can reveal to him the terrible truth behind his forgotten past and make sense of his harrowing future.

Despite how different the two games may seem, though, the core ideas behind them were developed concurrently. In fact, some elements from the first game — like the character Cyberdwarf, who plays an even bigger role in Barkley 2 — were actually originally created for the sequel. And even though several years have passed since the first game’s launch, developing Barkley 2 was always the plan. "In a way they’re almost the same game in my mind, even though they’re very, very different," says designer Brian Raum. "It’s been five years, but we’ve been thinking, we’ve been working." 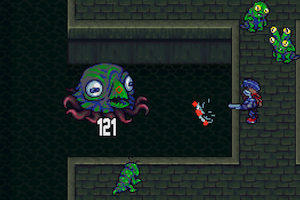 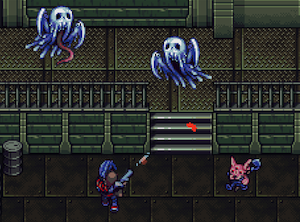 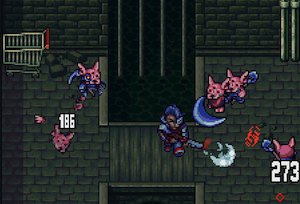 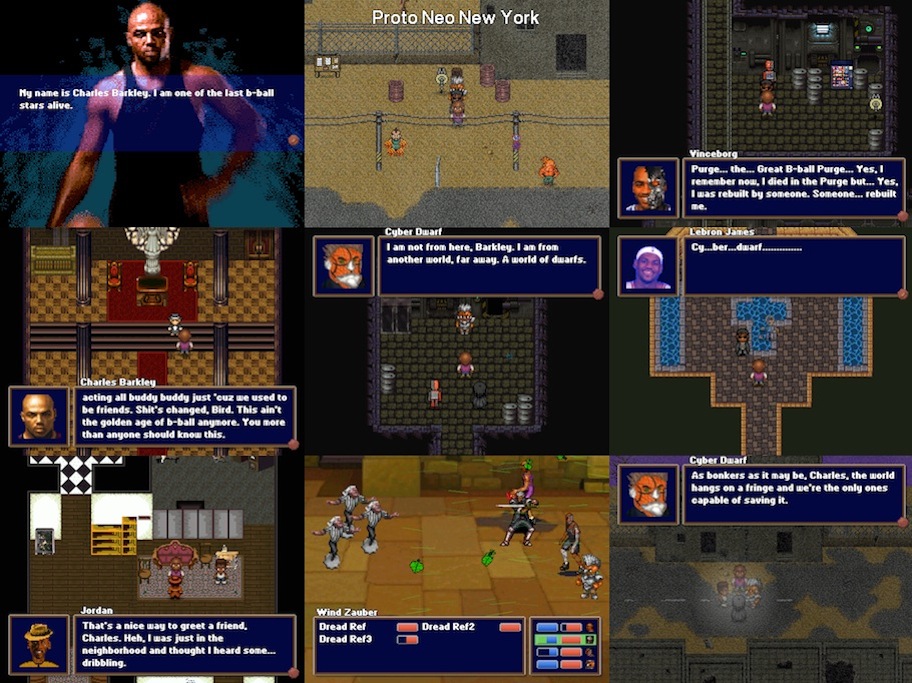 Scenes from the original Barkley Shut Up and Jam: Gaiden

Playing by the rules 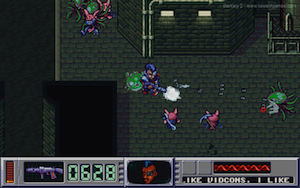 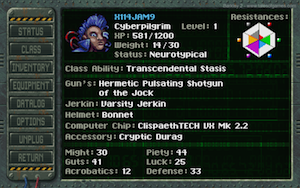 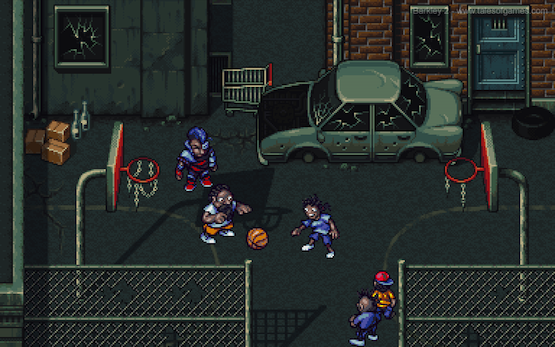 Possibly the biggest change with the sequel is that it won’t be free. Tale of Game’s has decided to go the commercial route with Barkley 2, which is an especially interesting move considering the original game liberally borrowed assets from other games. "We were actually a little bit nervous because the game breaks like every single copyright law in the books, so we were afraid we’d get hit by some cease and desists or a lawsuit or something," Shumaker says of the first game. "Fortunately that never happened."

But with the sequel the team is being extra careful — "we consulted lawyers and everything," says Shumaker — and will only be including original concepts and assets in the game. It’s partially because of this extra work, as well as the fact that the team is now a few years older, that Tale of Game’s has decided to launch a Kickstarter to fund the sequel. "When we made Barkley, we were just out of high school," says Shumaker, "so we could afford to just mess around all year on an RPG Maker game."

That’s no longer the case with the sequel, and the studio has enlisted new team members to provide help with programming and art, among other things. The Kickstarter is aiming to raise $35,000, which will largely be used to pay for these new additions. "We have people all over the place — from Canada, and Finland, and everywhere — that are working on it," says Liam Raum, who describes his role at the studio as the manager. "So we need to keep them financially invested in the game."

In keeping with the game itself, the rewards for the Kickstarter are equally ridiculous. For instance, the $150 tier gets you access to a 1990s-style game tip line once the game launches, while donating $100 will get you a full Japanese body pillow based on the character Cyberdwarf. The goal is to launch on Windows towards the end of 2013, while a Mac port is also a possibility (the studio also plans to release a Mac version of the Windows-only original Barkley in the future).

While Shumaker believes that it will be an "uphill battle" to reach the game’s funding goal (which he describes as a "modest amount"), the team is excited about the possibilities of their first commercial release. "If the Kickstarter succeeds, and even if we have the barest minimum money or anything like that, I’ll get to make a comparably high production value game that has things that I want in it," says Brian. "And not many people get to do that."