Brydge+ hands-on: turning your iPad into a MacBook Air

Share All sharing options for: Brydge+ hands-on: turning your iPad into a MacBook Air

Kickstarter success story Brydge has finally arrived. It’s a keyboard that wants to turn your iPad into a MacBook Air — or maybe it's the Type Cover for iPad that Apple never made. "With a click, you can type with the efficiency of a laptop," the company’s promo video even states.

It wants to turn your iPad into a MacBook Air

If you’re one of the many people hoping to replace your laptop with a tablet, it might be your best bet — especially considering its unibody aluminum design, adjustable hinge, and built-in stereo speakers. But at $210 (for the aluminum + version), is the Brydge worth it?

I tested the Brydge+, a keyboard made from an Apple-esque solid slab of anodized aluminum. When attached to a new iPad, it altogether weighs 2.74 pounds — .36 pounds more than the 11-inch MacBook Air it’s meant to replace, but a hair lighter than the 13-inch MacBook Air. The Brydge in practice feels heavier than both, since it has a much smaller footprint. Like the MacBook Air, the Brydge does not flex when you squeeze it, and has nary a seam to speak of. There’s even Apple’s trademark chamfered front lip for your thumb to help you open the Brydge when it’s attached to an iPad. 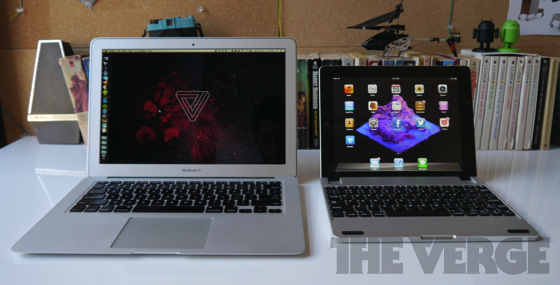 The Brydge comes with a set of sticky rubber shim inserts to help it best grip whichever 9.7-inch iPad you’re using (including future 9.7-inch iPads, its creators say). The iPad fits snugly inside the Brydge’s hinge clamps, which is both good and bad. It takes some practice to remove the iPad from the Brydge without feeling like you’re making permanent marks on screen with your thumbs. If you aim to use your iPad as a full laptop replacement, you might not be removing it so often, but if you plan to remove your iPad for frequent rounds of Fruit Ninja, you’re bound to get frustrated. The Brydge’s clamps use friction to hold in your iPad, which works, but it would’ve been cool to see something along the lines of what Logitech accomplished with its magnetic Logitech Ultrathin Keyboard Cover. 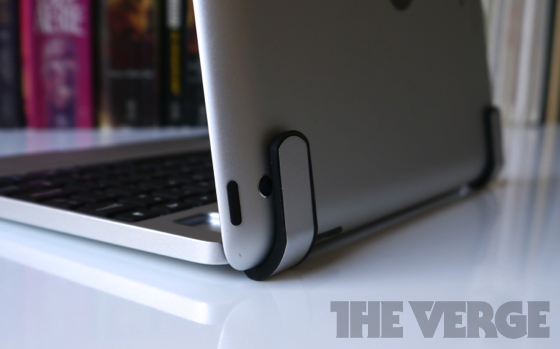 The Brydge’s hinge makes your iPad more adaptable for watching movies in a variety of situations, since many iPad cases and keyboards only give you one or two viewing angles to choose from. However you want to sit or slouch, you can likely find a good viewing angle using the Brydge — and a good deal of resistance prevents your iPad from wiggling around if you encounter some turbulence on a plane, or are using the Brydge on your lap. To this extent the device is good to have around even when you aren't typing or using its speakers. Another nice feature is that the Brydge automatically puts itself and your iPad in sleep mode when you close it using magnets underneath its hand-rests. The speaker, however, does not turn off unless you press a keyboard combination to disable it.

Setting up the Brydge is a somewhat convoluted process. The Brydge asks you to press two sequences of keys (plus a keycode) to set up the keyboard and speaker system, which operate as two separate Bluetooth devices you need to pair.

Whereas many iPad keyboards ask you to change your habits by ditching important keys like semi-colon or question mark, the Brydge keyboard doesn’t make many compromises. The Brydge’s black chiclet keyboard is quite similar to ZAGG’s line of iPad keyboards — compact, plasticky, but easy to get used to. Everything’s right where you expect it to be, and there’s even a row of function buttons up top like brightness controls, volume controls, and a Home button that come in pretty handy. Many of these function keys were placed at the precise locations where you’d find them on an Apple keyboard, which is a nice touch. 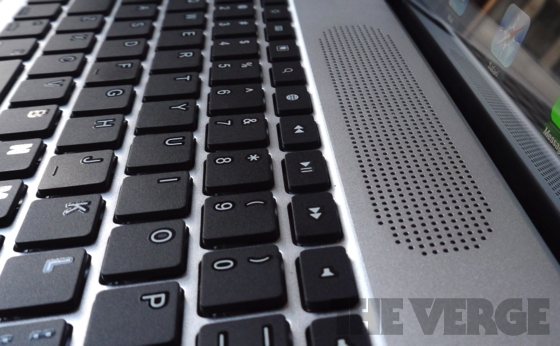 I didn’t make many mistakes while typing on the Brydge, though like with other iPad keyboards, I felt a lingering feeling of claustrophobia since the keyboard’s smaller than what I’m used to. The Brydge’s keyboard is a good deal narrower than the keyboard on an Apple laptop, and the keys that suffer most are function keys like Shift, Caps Lock, and Tab. The Shift on the right side of the keyboard takes an especially large real estate hit, but so does the Shift key on most iPad-width keyboards like the Brydge. In the end, Brydge’s creators did a great job picking and choosing which keys to modify in order to shrink the keyboard. Like most other keyboards for iPad, the Brydge’s keys are plasticky and sometimes noisy, since they aren’t as "soft" as keys on an Apple keyboard, but I’ve come to expect this from iPad keyboards and wasn’t disappointed.

There isn’t a whole lot to say about the Brydge speakers, except that they’re better than the one inside the iPad. There’s very little bass reproduction to speak of, and the sound is tinny, but we’ve got stereo, and the speakers aren’t pointing backwards like those on an iPad (which are on the device’s curved bottom edge). For cozying up and watching a movie while you’re out camping or somewhere else that’s quiet, these speakers will serve you well enough. For any other circumstances, I’d still recommend using headphones or external speakers. Another reason to leave the speakers switched off is because they dramatically reduce the battery life of the Brydge, and because they don’t turn off automatically like the Brydge keyboard — but they’re nevertheless a nice option to have. 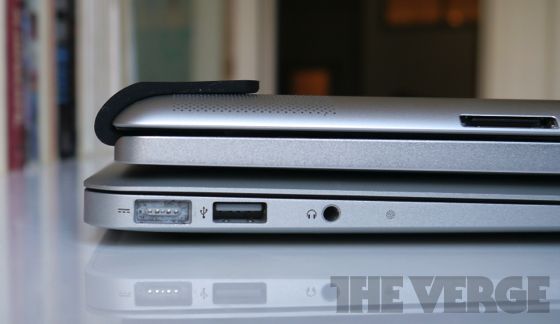 Brydge’s creators claim that the keyboard lasts "months" when using the keyboard, and "reduced battery life" when using its speakers with the keyboard turned on. While it’s difficult to test the Brydge for that period of time, I’m confident that the Brydge's 800 mAh lithium ion battery lasts long enough for extended trips. "If only doing a normal amount of typing, it should last for months. If you use the speakers constantly for movies at medium volume, it will last a few days," Brydge's Sam Gordon says. The Brydge comes with a stylish flat Micro USB cable for charging.

At the end of the day, the Brydge lives up to its promise: perfecting the hinge that makes laptops so flexible and useful, but for the computer of the future — the iPad. Its keyboard feels close to full-sized, and is up there with my favorite keyboards for iPad, like the ZAGG. Its hinge, build quality, and keyboard tactility are far better than what you’d find on the ClamCase, another popular entry that aims to turn your iPad into a laptop. If you’re set on getting a clamshell iPad case, the Brydge is the one to get, but I’d recommend other options for occasional typists (see "The Verdict" here) or for those who often use their iPad for gaming or reading.