Acer C7 Chromebook review: the rebirth of the $199 laptop?

Chrome OS is in the midst of a sort of existential crisis. Google's web-based OS was originally used on full-fledged, full-powered and full-priced laptops, but its niche now seems to be cheaper, smaller computers. But even in that world, there's plenty of variation.

Samsung's new Series 5 Chromebook costs $249, and looks and feels like a regular laptop, but it's powered by an ARM processor that you're more likely to find in a tablet or a cellphone. Acer has gone the opposite direction with the C7 Chromebook, which is going on sale this week. The C7's engine is all laptop, right down to the Intel sticker on its palmrest — and yet this Chromebook only costs $199. To reach that eye-popping price point, though, Acer built a smaller (11.6-inch) device with some significant design compromises.

So who's right? Does Chrome OS beauty come from inside or outside? And have we finally reached a point where $200 buys you a real, true, functioning laptop? Read on.

As soon as I took the C7 out of its packaging, I started having flashbacks. Flashbacks to a time when no one cared about how a laptop looked or the quality of its materials, a time when we were certain that netbooks were the future. The three-pound, inch-thick laptop is plastic everywhere you look, has exactly no design flair — it comes in silver and black, both boring-looking — and almost no care seems to have been taken in its design or construction. I can easily get my fingernail in the seam between the lid and the bezel around the display, and I'm worried about other things getting in there too. The base's two sections don't come together cleanly, either, and there's a sharp lip on the bottom as a result. Even the hinge sticks out awkwardly behind the base, like it's about to come off. Every part of the C7 bends and flexes as you hold it, and I found myself babying it for fear it would break.

The Chrome logo on the lid is a perfect synecdoche of the C7's whole design. It's not lasered on, or a raised logo that feels nice under your fingers. It's a cheap piece of plastic, dropped into a cut-out spot on the lid that's a bit too large for it. It's even a different color, in case the gaping seam didn't tip you off that it's a separate piece of material. I get that you can't build a $200 laptop without some sacrifices, but it's these little touches and manufacturing imperfections, which couldn't cost much more to do correctly, that make the C7 feel even cheaper than it is.

You do at least get a fairly normal port selection for a Chrome OS device. The right side is home to a headphone jack, power adapter port, and two USB 2.0 ports. There's another USB port on the left side, along with a full-size Ethernet port, and VGA and HDMI ports for connecting the Chromebook to an external display. A full-size SD card slot faces forward, and fortunately it's deep enough that your card won't poke out the front of the device. 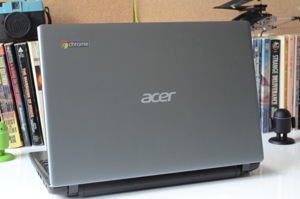 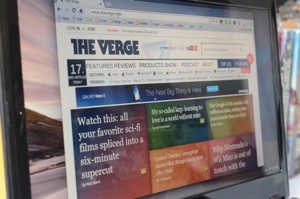 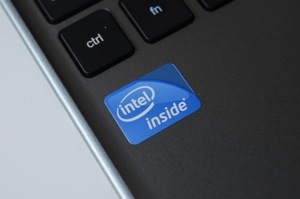 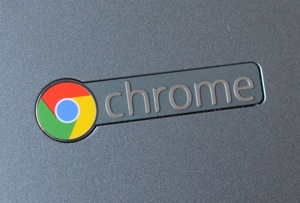 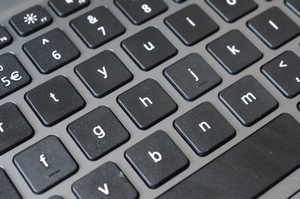 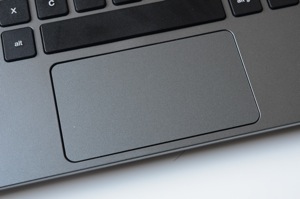 The 11.6-inch display is where I expected to see Acer skimping most, but it's actually totally usable. Its 1366 x 768 resolution is the same as most 13-inch laptops, so it's even a bit sharper since the pixels are more densely packed. As long as you're not staring at the C7 from six inches away, you won't notice any individual pixels or imperfections. The screen's not particularly bright, and the display and black bezel are both ridiculously reflective — it's also glossy, unlike the matte displays I love on most Chromebooks — but it gets the job done. That's more than I expected from a laptop this cheap.

Every 11.6-inch laptop has a small keyboard, and it always takes some getting used to. The C7's is actually quite good once you spend some time with it — its keys are a little small but well-spaced, well-cushioned, and have a nice clacky travel. Instead of shrinking the Shift key to create more space — like most manufacturers do – Acer instead made the arrow keys tiny, and surrounded them with tiny PgUp and Dn keys. They're really hard to use, but I use Shift much more than the arrows, so I approve of the decision. Like all Chromebooks, the C7 has a bunch of handy function keys above the number row: you get playback and brightness controls, but also one-key access to search, back and forward in the browser, and a window switcher. Once you get the hang of using the keyboard, you really don't have to use the mouse except to scroll.

Thank goodness, too, because the C7's trackpad is horrible. It's sticky as you move your finger across it, and the cursor jumps across the screen in response. It's not even reliable as a pointer, since it's always stuttering around. Two-finger scrolling technically works, but just barely: sometimes I'd swipe and the page would advance by about three lines, and other times it would fly down to the very bottom. Pinch-to-zoom is basically a non-starter — it only worked every other time I tried, and even then took a few seconds to respond. Since Samsung's Chromebook trackpads have typically been really solid, I hate to see Acer not put out a better effort. 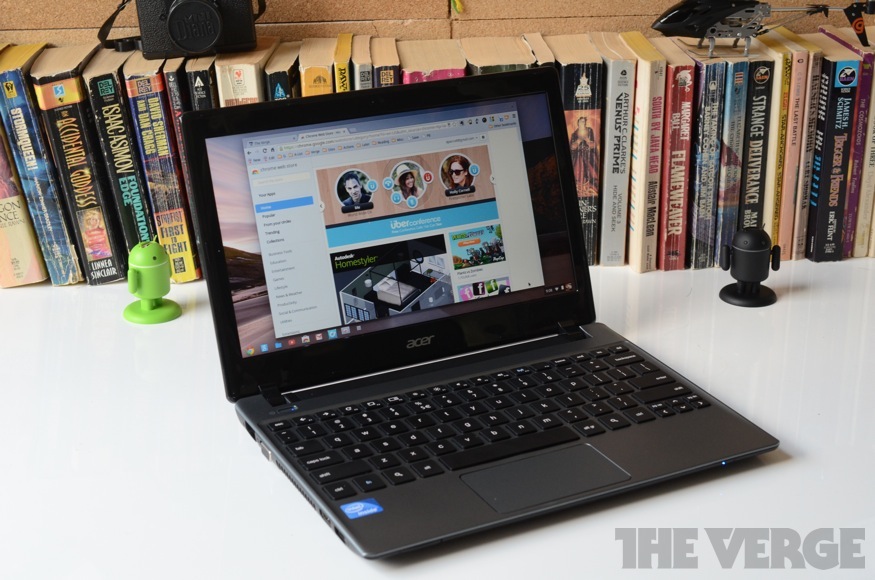 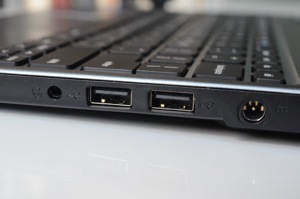 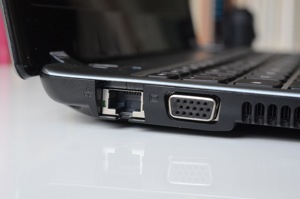 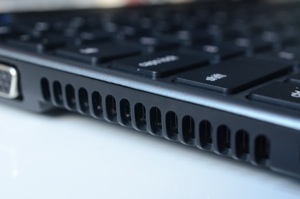 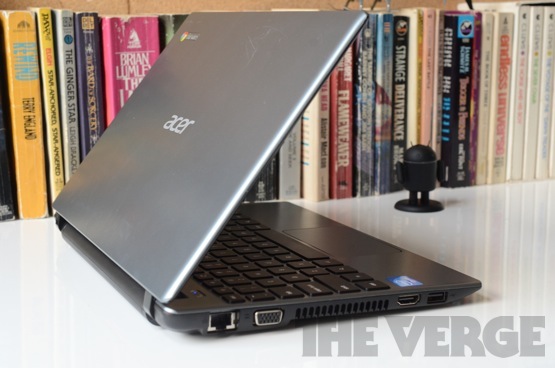 Here's where the C7 should make up some ground on the Samsung Chromebooks. This model is powered by a dual-core Intel Celeron processor, a low-power Sandy Bridge chip clocked at 1.1GHz along with 2GB of RAM and a 320GB hard drive — that's not the most exciting spec list, certainly, but it ought to place the C7 above the Exynos-powered Samsung Chromebook and its paltry 16GB of internal storage. Since every Chrome OS device runs the same software — which we reviewed in detail here — better internals should make a difference.

The C7 is more powerful, to an extent. On the SunSpider browser test, it scored an average of 637.5ms, a little faster than the Samsung's 704.1ms and much improved over the 550's 950.8ms (lower scores are better). All pale in comparison to most recent laptops – my year-old MacBook Air scored 293.2ms — but the C7's definitely the best of the bunch.

Cirque du Soleil's "Movi.Kanti.Revo" Chrome experiment definitely strained the machine, but it ran fine — more than can be said for the Samsung Chromebook. There's no question the Celeron is a faster, more powerful processor than the Exynos inside Samsung's laptop.

But here's the thing: performance isn't often the limiting factor with Chrome OS. The milliseconds of difference in loading and rendering times aren't really noticeable, and Chrome OS simply isn't designed for doing anything particularly heavy anyway. The C7 does a great job with even heavy webpages and apps, including the most intense Chrome OS games I could find and all the crazy proof-of-concept Chrome Experiments — but the things you'll use a Chromebook for are likely much more basic. I never had Flash crash, which made me furious at my freeze-prone Macbook Air, and in general the C7 brandishes one of the best and most reliable browsers I've used. But that's true across most Chromebooks, especially since the "Aura" Chrome OS update, and the C7's performance isn't markedly better than the ARM-powered Samsung model.

The slight improvements aren't worth the tradeoffs, either. Samsung's Chromebook runs completely silently, with no fans or noticeable heat; the C7's fan kicks on as soon as you do anything intensive or Flash-based, and spits seriously hot air out the left side of the laptop. Fortunately the machine itself never gets very hot – just make sure you don't have a bare leg near that vent. The C7 is also slow to boot up, taking 24 seconds to get going rather than the sub-10-second boot times of other Chromebooks. That's likely due to the C7's spinning hard drive — Acer picked more storage over faster speeds, and on an always-connected device like this I'd rather have the speed. It resumes from sleep instantly, though, which is far more important.

Battery life is the other, bigger tradeoff. The C7 lasted four hours, 29 minutes on the Verge Battery Test, which cycles through a series of popular websites and images with brightness set to 65 percent — that's a decent score for a laptop in general, but is really weak for a Chromebook. Samsung's ARM-powered Chromebook lasted over seven hours on a charge, as did its six-month-old Intel-powered model. The battery is removable, so you can tote a spare if you're so inclined, but Acer has no excuse for such poor performance on a device that's essentially just a browser. 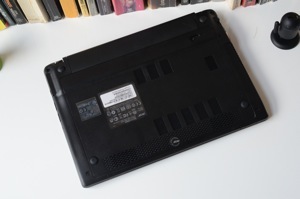 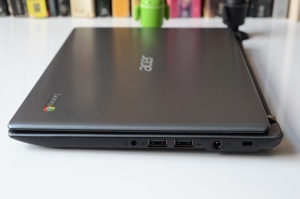 Samsung made the right compromises for $249, but Acer couldn't hit $199 without killing the appeal

Maybe we shouldn't be asking what a Chromebook looks like just yet. Maybe we need to first ask, "what is a Chromebook?" Here's what I think: A Chromebook is a no-frills device with a great web browser, a great keyboard and trackpad, and a long-lasting battery. It's not a workhorse. It's a secondary computer or a living room laptop. It should be nice to look at, and easy and reliable to use.

If I'm right, Acer missed the mark with the C7. The company chose to spec it like a laptop — more powerful, Intel-made internals, a larger hard drive — but ignored the key tenets of what makes a Chromebook great. Its battery is too short, its trackpad too frustrating, and its design too weak to make this appealing to anyone other than buyers looking for the most power available. And I'd wager heavily that those buyers aren't looking at Chromebooks in the first place.

Spend the extra $50 and get the latest Samsung Chromebook. If you don't expect the world, you'll be very happy with its performance, ARM processor and all — plus it'll last you longer, and look and work better in the process.