Fantastical: the intelligent iPhone calendar app we’ve been waiting for is here

Can the best Mac calendar app transition to the small screen?

Share All sharing options for: Fantastical: the intelligent iPhone calendar app we’ve been waiting for is here

I’d consistently heard great things about Fantastical for Mac, but I wouldn’t buy it. I wasn’t ready to pay upwards of fifteen dollars for a nice-looking menu bar calendar, though it did include the "List View" I’d come to love on my iPhone. But then a colleague showed me Fantastical’s event creation bar, a white box that turns your words into calendar events. I was sold, and for months I like many others longed for it on iPhone. "We knew there’d be a market if we just ported Fantastical, but that’s not how we roll," says Flexibits co-founder Michael Simmons. "I’m not in this for the money." Simmons and co-founder Kent Sutherland needed a reason, or an enemy to defeat on the small screen. Fantastical for iPhone goes on sale today for $1.99 in the App Store, but what’s different? Did the guys at Flexibits reinvent the way we create events all over again?

Fantastical for iPhone looks a lot like its Mac-bound older brother — with a red month bar adorning its top and a list of events below it. In fact, Fantastical looks a lot like the iOS Calendar app, but in a darker mood and with a higher information density since there’s no bottom navigation bar. Whereas Calendar has a Today button, tapping Fantastical’s month bar takes you to today. Instead of a Week view button, Fantastical introduces DayTicker, a quick way to swipe through your week and see how busy you’ll be. Pull down on the DayTicker to engage Month view, which lets you swipe through months instead of having to tap small arrows. And right there, Fantastical already includes all the functionality inside the iOS Calendar app, but gives you more space to browse your events.

Aside from looking handsome, Fantastical includes the quickest way I’ve seen to create a new event on an iPhone. Tap the plus sign in the top right corner of the app to open the "new event" screen, and then type in something like "Dinner with John from 630 to 730 PM on Friday at Chipotle" (no colons required). Tap Add, and your event gets added to your calendar. Fantastical for iPhone, like Fantastical for Mac, includes "natural language processing," — a miraculous engine that turns your words into events, seemingly no matter how strangely you phrase them. There's no need to fiddle with Calendar’s myriad scroll wheels and fields to plot a precise time, day, or place for an event.

When Apple launched Siri, it flaunted its own flavor of natural language processing for creating events. Saying "Schedule dinner with Billy Disney at 7 PM on Friday at Papaya Dog" to Siri should yield you a new calendar event with all the corresponding details. But alas, Siri is far from infallible, has no idea how to spell the names of the places you’re going, and doesn’t work when you only have a couple bars of cell service. And of course, if you depend on Siri for adding events you’ll be spending a lot of time dictating your schedule aloud for anyone to hear. 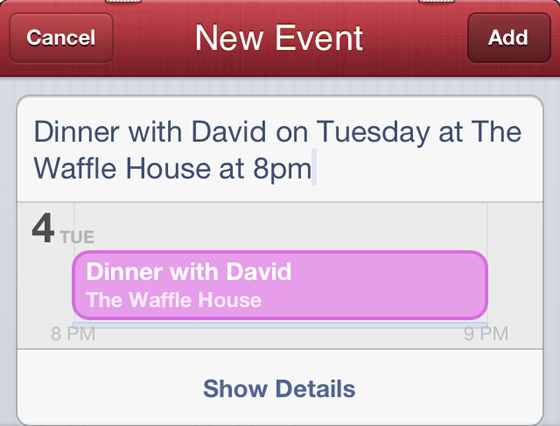 Fantastical’s natural language processing, on the other hand, is solid like a rock, and for your eyes only. "Dinner with John in a fortnight at Patsy’s"? You got it. "Dinner with John at Patsy’s every Tuesday forever"? That works too. Like in Fantastical for Mac, adding "/work" or "/home" to the end of an event quickly changes the event’s calendar to work or home. Everything you type into the "New Event" screen instantly animates below it, assuring you that the app’s recognizing your location as a location and your event’s end time as the right time.

It ends up that natural language processing isn’t Fantastical for iPhone’s killer feature — at least to Simmons and engineer Kent Sutherland. Turns out that DayTicker, the at-a-glance "week view" at the top of the app, was the reason they decided to build Fantastical for iPhone. The duo were quite far along building another app when Sutherland had an idea. "'What if we had a different way to interact with dates?’ Kent thought, and I immediately visualized it," Simmons says. "We prototyped it, and it became infectious. We wanted the app, and that’s how we knew it was cool." Flexibits began work on Fantastical for iPhone and completed it in just short of six months. 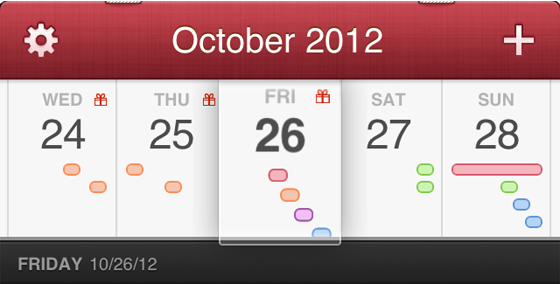 At first glance, DayTicker isn’t the "killer feature" it’s made out to be, but it grows on you. I soon learned that long-pressing a day pops up the "New Event" screen, and that glancing at a day box is a quick way to know if I’m free or packed with meetings when a friend asks if I want to get lunch next week. I would’ve been perfectly happy with a clone of Fantastical on iPhone, but DayTicker takes the app a step further.

Fantastical plugs into the calendars you’ve already set up on iOS and makes direct edits to those calendars instantly. This means that any calendars you already use on your device (like Google, iCloud, Facebook, CalDAV, Exchange, or other calendars) are already present in Fantastical, and require no setting up. Fantastical doesn’t even offer options to add or remove calendars — only to hide calendars you don’t want to see. The only thing missing is support for inviting people to events using an Exchange account, but iOS doesn’t yet allow third-party apps that capability. "We want it too," Simmons says. "Maybe somebody at Apple will love Fantastical so much that they’ll make it happen." Once you’ve accepted an event elsewhere, however, you can see the event and edit it (but not add more attendees) inside the app.

Fantastical for iPhone is the easiest to use calendar app on iPhone, and the fastest way to create events while you’re on the go. It leaves alone what wasn’t broke in the iOS calendar, and refines everything else. "Working with fonts is like a relationship — it changes day to day," Simmons says. "There’s no real answer except that you try a bunch of things, and see what’s pleasing, what’s functional, and what’s proportional." To that extent he has succeeded, in a pool of third-party calendar apps that are often ugly, sluggish, or cumbersome to use.

"I want to be known for fixing calendaring. Maybe we should’ve called ourselves Fixbits."

On top of looking good, the app introduces DayTicker, a new way to see the next few days of events at a glance. And finally, Fantastical brings Flexibits’ trademark natural language processing to iPhone for the first time. "I want to be known for fixing calendaring. Maybe we should’ve called ourselves Fixbits," Simmons jokes.

Yes, Fantastical doesn’t include the full-screen "Week View" loved by many, and featured in the iOS Calendar (in landscape mode) and other apps like Week Calendar, but I’d still recommend the app to those people. At $1.99, the ability to quickly create events is easily worth the price of admission.