While it's a good deal later than we originally anticipated, Apple's iTunes 11 is finally available for OS X and Windows. The new release isn't fundamentally different than previous versions — iTunes 11 still organizes all of your music files along with movies, TV shows, podcasts, iBooks, and iOS apps. However, the UI has received a great deal of visual polish and the app uses its space much more efficiently.

Upon opening the app, you'll immediately notice that the iTunes sidebar — which served as an access point for music and video libraries, the iTunes Store, playlists, and any connected iPads, iPods, or iPhones — is gone. In its place is a bar at the top of your library with a drop-down for swapping between different media types, as well as a button to switch over to the iTunes Store. Any connected iDevices will show up here, as well. However, if you're a fan of the old interface, you can easily bring back the sidebar, and the "songs" view lets you bring back the familiar artists, albums, and genres lists.

Possibly the biggest UI overhaul iTunes has ever received

You'll also notice that performance has been greatly improved — album art renders faster, and scrolling through big libraries appears to be much snappier than it was in iTunes 10. The iTunes Store is also significantly faster; rendering when switching between the music, TV, movie, and app storefronts was almost shockingly quick. iTunes has a deserved reputation for being a dog when it comes to performance, but it seems Apple has made some pretty solid improvements this time around.

One of iTunes 11's major UI themes is the use of sliding panes that open to reveal needed info, but can then be tucked away to save screen real estate. For example, clicking an album's cover art expands an area that contains the tracklist, play control buttons, and a link to view similar content in the iTunes Store — it's quite reminiscent of opening a folder in iOS, and it's a nice visual improvement. Clicking a movie or TV show offers the exact same view, with all episodes of a TV season grouped in that one location. 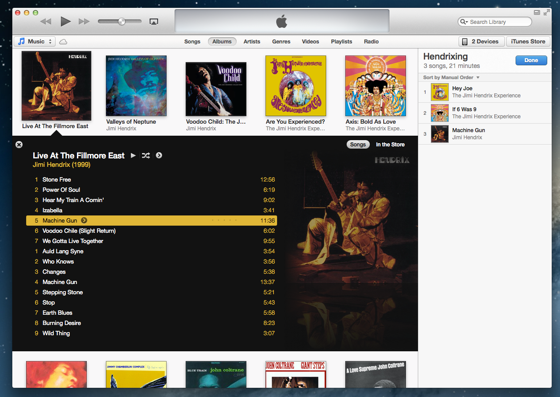 Playlist creation and managing media on an iOS device has a similar new design — clicking playlists from the top navigation bar brings up the familiar list on the left, but when you click the new playlist button, a pane slides opens up from the right side of your library. From there, you can easily drag songs or albums, and re-order it on the fly. It's now impossible to drag songs to the wrong playlist (a common problem in iTunes for years), and you have a nice preview of your creation as you build it. Once you're done, the pane slides away and the new playlist is added to your library. Adding media to iOS devices works much the same way — while the full-screen device management view is still present, there's also a smaller pane that lets you easily drag and drop content if you're so inclined. 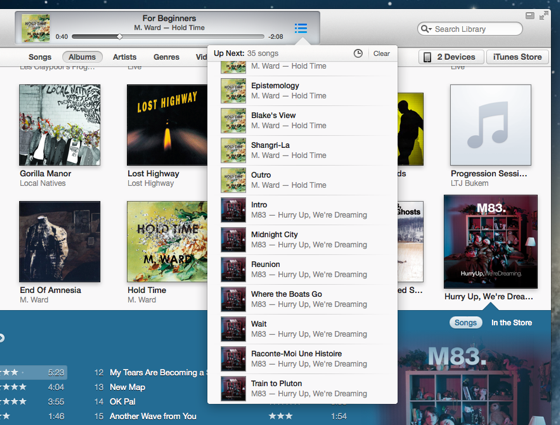 Probably the biggest addition to the experience of playing music through iTunes in the new "up next" feature. iTunes finally has a real music queue — when you start an album or playlist, all songs are added to the list, but you can easily remove ones you don't want to hear. You can then add more songs, playlists, or albums to the queue by clicking "add to up next," or you can skip to the front of the queue with the "play next" option. In practice, it works very much like Rdio's "play later" feature that makes it much easier to keep music flowing as you think of new songs you want to hear. It's not a revolutionary addition by any stretch of the imagination, but it's the kind of feature that definitely helps refine the listening experience. 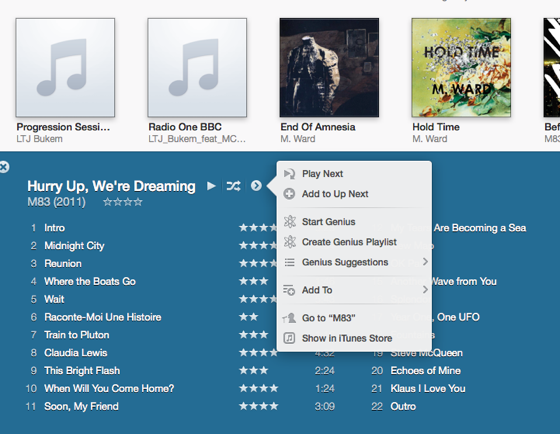 Search has received a facelift as well. Results are now grouped into different categories (song, artist, or album), and results can easily be added to the "up next" list straight from the search drop-down. Both search and "up next" have been integrated into the redesigned iTunes Mini Player view, as well, making that a much more useful tool than it was in versions past.

iCloud has, unsurprisingly, also been baked further into the new iTunes. The biggest addition is that purchased iTunes content now shows up in your library, regardless of whether or not you've locally downloaded it to your machine; all of that content can either be streamed or downloaded. It's a nice addition, particularly for those that have large TV or movie libraries — you can have easy access to all your video content without having to sacrifice storage space. If you only want to see what's local to your machine, iCloud content can be easily hidden.

Apple's still working out the kinks on iCloud-synchronized playback

Apple is also touting iCloud synchronization — a feature that will let you start watching video on one device and pick it up right where you left off on another. The company says this will work on on iOS devices and Apple TVs as well as on machines using iTunes, but our initial experience with this feature proved to be fruitless. Regardless of whether videos were streaming from the cloud or downloaded to our devices, playback faithfully started from the beginning each time - it looks like Apple hasn't quite worked out the kinks on this feature.

iCloud playback issues aside, the new iTunes is a pretty significant upgrade over the last version. While Apple's aesthetic choices may be up for debate (the new icon is particularly ugly, and slightly tweaked fonts may take some getting used to), the new features are most welcome, as is the speedy performance. We're still waiting for iTunes to enter the streaming world that many users are beginning to embrace, but for those who prefer the time-tested functionality that iTunes has delivered for years, this is a major upgrade that's worth the download. While the new organization scheme and iCloud features might not be for everyone, all users should appreciate the performance boost at the very least.