Like data before it, Voice over LTE presents major battery hurdles for manufacturers

Share All sharing options for: Like data before it, Voice over LTE presents major battery hurdles for manufacturers

When LTE data finally made its way to smartphones, it didn't come without sacrifices. At the top of that list was battery life: the initial fleet of 4G hardware exhibited mediocre longevity, rarely making it through a half-day of usage — let alone an entire day. As manufacturers have optimized LTE radios (and crammed larger batteries into phones), those battery concerns have been largely mitigated. Unfortunately it seems that we're in for the same lesson with Voice over LTE (VoLTE). Still in its infancy — MetroPCS and Sprint are is the only US carrier currently supporting VoLTE — the technology promises higher voice fidelity and clearer conversations. But tests conducted by Metrico Wireless reveal those perks take a significant toll on battery performance. 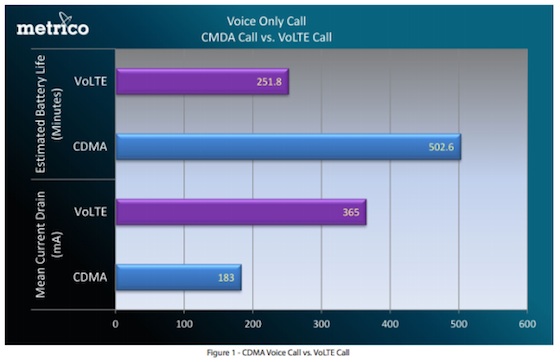 Using a handset with a 1540 milliamp hour (mAh) battery, matching the capacity inside MetroPCS' LG Connect 4G, they sampled the difference between making calls on 2G CDMA voice bands and on LTE spectrum. The results weren't encouraging: a full charge gave Metrico's test smartphone 502.6 minutes of talk time over CDMA, but that number plummeted to 251.8 minutes of talk time using the 4G network. The drastic difference shouldn't come as a surprise since smartphones haven't yet evolved to take advantage of Voice over LTE the same way they have data. But such numbers certainly won't help convince other US carriers to support VoLTE anytime soon. In fact, it could lead some to skip the standard altogether and focus their efforts on video calling.