A few days ago, China successfully launched and landed a fighter jet on its first aircraft carrier in a symbolic demonstration of the nation's growing military power. Certain internet users in the country, however, had other things on their mind — namely, the unusual Top Gun-style US Navy gesture used by the landing crew to guide the jet to safety. The action pose has been emulated by many Chinese people online in a variety of situations on Sina Weibo and other social networks, and Ministry of Tofu has collated several great examples. Coming so soon after "Gangnam Style," it looks like East Asia is staking a solid claim to become the new capital of physical memes. 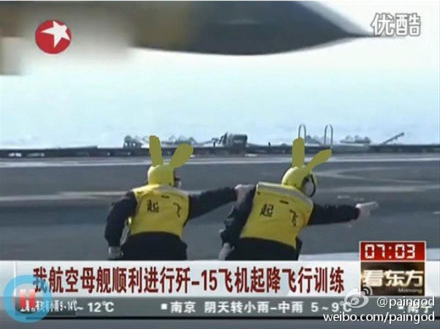