King of Samsung: a chairman's reign of cunning and corruption

King of Samsung: a chairman's reign of cunning and corruption

Lee Kun-hee made Samsung a global power over 25 years, but at what cost?

If Samsung chairman Lee Kun-hee takes a moment this weekend to reflect on the past 25 years, he could be forgiven for having mixed emotions. Tomorrow marks the quarter-century point since Lee took over from his late father, and his time in charge has seen a whirlwind acceleration in Samsung's fortunes. Under Lee's guidance, the company has been transformed from a Korean budget name into a major international force and arguably the most prominent Asian brand worldwide — Samsung's revenues are now 39 times what they were in 1987, it generates around 20 percent of South Korea's GDP, and Lee is the country's richest man.

Samsung's rise to the top has been tainted with controversy

But the company's rise to the top has been tainted with controversy. Samsung is the quintessential example of a chaebol, that uniquely Korean brand of conglomerate that mixes Confucian values with family ties and government influence. Accusations of corruption and cozy establishment connections, conviction over an embezzlement scandal, strained family relationships that threaten the traditional chaebol structure, and a bruising patent battle with Apple have taken the polish off Samsung's — and Lee's — glittering business record. Who is Lee Kun-hee, and how has he managed to survive this delicate balance of stress and success? And where next for the company, which still yearns to be taken seriously as a force for innovation?

The nepotistic succession was typical of chaebols

Lee Kun-hee became Samsung chairman on December 1st, 1987, just two weeks after the death of his father, Lee Byung-chull. The nepotistic succession was typical of chaebols, but the younger Lee found himself at the helm of a fairly steady ship; Samsung was already leading several markets in its home country. Founded in 1938 as a trucking business called Samsung Trading Co, Lee Byung-chull had steered the company through Japanese occupation and the Korean War to become a successful conglomerate before entering the electronics industry in the 60s. Samsung's rise, like those of many chaebols, had been assisted by close ties with the authoritarian administration of Syngman Rhee, but things changed following Park Chung-hee's military coup in 1961.

Park wanted to turn South Korea into a manufacturing giant to compete with the rising communist North and a resurgent Japan, and to that end he enlisted a select number of companies that could work towards that goal. Since Korea is not a land particularly rich in any natural resources or, at the time, skilled labor, Park chose to focus on efficiency by putting the country to work on raw materials imported from elsewhere. Lee Byung-chull's corruption and ties to the previous government were forgiven, and Samsung enjoyed the full support and privileges of a new industrial machine. When Lee's era came to an end, his third son Lee Kun-hee took over a manufacturing giant that was spearheading South Korea's economic growth. 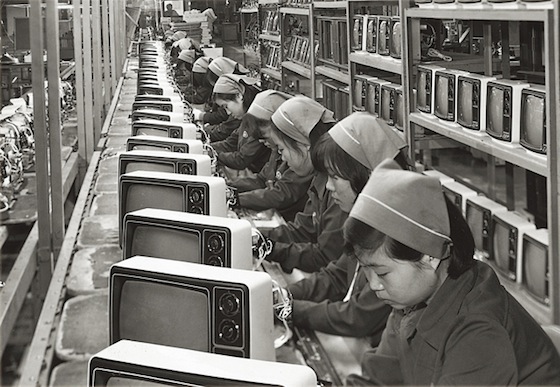 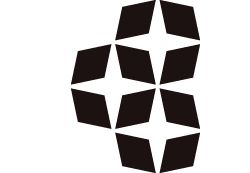 "Samsung" is a Korean name formed from the Chinese characters 三星, meaning the "three stars" that gave the company its logo for decades. That logo, however, was soon thrown out by Lee Kun-hee in favor of the neutral blue ellipse that's still in use today. The rebranding was part of Lee's plan to transform the company from a Korean success story into an international powerhouse and came alongside a shift in the way the company worked internally. Lee famously told his employees to "change everything but your wife and kids" in 1993, and true to his word attempted to reform the profoundly Korean culture that had pervaded Samsung until this point. Foreign employees were brought in and local employees were shipped out as Lee tried to foster a more international attitude to doing business.

"Change everything but your wife and kids."

Lee Kun-hee to Samsung employees in 1993

During the late 80s and early 90s it seemed all but inevitable that Japan would become the dominant manufacturing power in the world. Of course, today the country struggles against South Korean rivals, battered by a hostile exchange rate and sky-high labor costs, but it was Lee's foresight around two decades ago that allowed Samsung to get the jump on the likes of Sony. He saw Japanese firms dragging their feet on digital technology, creating an opportunity for Korean companies to muscle in on their turf with better, more efficient business practices. Seoul National University professor Song Jae-yong characterizes these as a blend of the company's prior, Confucian- and Japanese-influenced thought and newer inspiration from the West. For example, Lee gradually introduced merit-based incentives for promotion and compensation without entirely overhauling the prior system that worked on the basis of seniority. As the ‘90s turned into the new millennium, Samsung started looking less like a Japanese company in style, but more like one in success — and quality. "They've gone from a minor brand, especially in the US, to a powerhouse in many different markets that now often defines cutting edge products," says Michael Gartenberg, research director at Gartner. "In many ways they now define excellence in a way that Japanese consumer electronics companies once did." 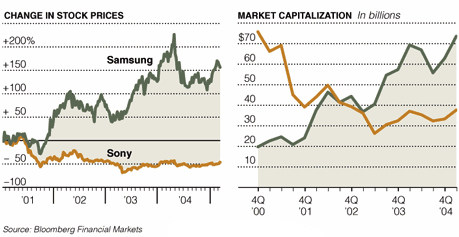 In 1997, Lee wrote that "a heightened sense of crisis" was needed for any company to succeed, warning of the risks of complacency. Maintaining this attitude must have come in useful that same year when journalist Lee Sang-ho published recordings of Samsung vice-chairman Lee Hak-soo talking to the Korean ambassador to the United States, Hong Seok-hyun. The conversation revealed plans for Lee and Hong to funnel around 3 billion won (roughly $3 million) to South Korean presidential candidates and implicated Samsung in the bribing of senior prosecutors. Lee Sang-ho claimed Samsung consistently tried to silence allegations of corruption, leveraging its ownership of the major Joongang Daily newspaper — which was published by Hong Seok-hyun. Hong was forced to resign as US ambassador and Lee Kun-hee received a suspended two-year prison sentence for bribing former presidents in a separate incident (later pardoned by president Kim Young-sam), but the general fear around reporting negative coverage of Samsung remains.

A 2010 book called Think Samsung by the company's former chief legal counsel Kim Yong-chul has made the largest waves since. It revealed alleged shocking details of Lee Kun-hee's personal corruption, claiming that he stole up to 10 trillion won (about $10 billion) from Samsung subsidiaries, destroyed evidence, and bribed government officials to ensure the smooth transfer of power to his son. Reaction to the book was divided in Korea, with the vast majority of mainstream media refusing to cover it or run advertising, and many local people viewing Kim's allegations as little more than sour grapes; the result of unsettled grudges with the company. But affection for Samsung runs deep in South Korea, and an assault on the company's culture can almost be seen as an attack on the country itself — even when the man in question is a convicted fraudster.

Lee Kun-hee resigned from Samsung in 2008 after being indicted and found guilty of embezzlement and tax evasion in Samsung's infamous slush funds scandal. Kim Yong-chul alleged that the company had a 200 billion won (roughly $200 million) budget for bribing prosecutors and politicians into turning a blind eye to its legal misconduct. Despite prosecutors seeking seven years in jail with a fine of 350 billion won ($350 million), Lee was handed a suspended three-year sentence and fined just 110 billion won ($100 million) — a relative pittance for the world's 106th richest man. Months later, South Korean president Lee Myung-bak gave Lee Kun-hee a second personal pardon so that he could remain on the International Olympic Committee; the Samsung chairman went on to lead a successful bid to host the 2018 Winter Olympics in Pyeonchang. Amidst widespread criticism that the incident highlighted the favorable treatment given to corrupt chaebol executives, Lee returned as Samsung Electronics chairman the following year.

Samsung's sense of crisis was further heightened earlier this year by its devastating loss to Apple in court. A jury found that several Samsung products copied Apple devices in their design and ordered the Korean company to pay over $1 billion in compensation. Mobile chief JK Shin had previously told his staff that the company was suffering a "crisis of design" while attempting to overthrow Nokia, and Samsung thereby turned its attention towards Apple with the development of the first Galaxy S. Unfortunately, this application of Lee's crisis culture thinking led the company down the path that was eventually closed off by Judge Lucy Koh in emphatic fashion. The issue speaks to Samsung's culture at large; despite huge financial success and a recognisable style starting to become apparent in devices such as the Galaxy S III, the company is yet to create a truly breakthrough, iconic product in the vein of the iPhone or Walkman. That will need to be rectified if the Samsung brand is ever to stand for real innovation, and despite Lee's substantial reforms of the company's hierarchical structure and top-down thinking, they may not have gone far enough.

True to chaebol form, the 70-year-old Lee's only son is already being groomed as the next chairman. Lee Jae-yong is currently president and COO of Samsung Electronics, and at 44 could represent a newer, more modern outlook for the company. He was behind the company's successful expansion into application processors and OLED displays, and reportedly has a strong interest in product design. But, with his father maintaining a strict hold on events across the company, there are doubts over his experience and leadership credentials. The appointment of a new chairman based on family ties over merit could spark public dissent over the traditional system of inheritance; several candidates in the upcoming South Korean presidential election, such as anti-virus entrepreneur Ahn Cheol-soo, have run on a platform of reforming the chaebols.

Lee's only son is already being groomed as the next chairman

Fighting within the Lee family, too, threatens to disrupt the company's future. Lee Kun-hee's older brother and sister have both sued him over the ownership of inherited shares, and for the first time this year the family split to hold separate memorial services for their father. The Samsung chairman has claimed that his brother, Maeng-hee, was "kicked out" of the family, and raged over his sister's marriage to a son of rival chaebol LG's founder. Questions also remain over how power will be transferred to Jae-yong, with the older Lee's conviction still fresh in the mind of many.

While Lee Kun-hee once implored his workers to "change everything but your wife and kids," that change may not go far enough for Samsung. The traditional chaebol model has helped the company become one of the most successful in the world, but its conservative values are unlikely to help it become a major force for innovation. Lee Kun-hee's controversial time in charge has undeniably brought the company success — for Samsung to become a truly loved brand, however, it must start looking to a new generation of leadership that prioritizes design and originality over ruthless competition.