How Windows 8 challenged the 'gorilla arm' — and won

With Windows 8, touchscreens are more relevant than ever before. However, some pundits have long believed that a touchscreen simply doesn't belong on a laptop. Sometimes, they quote Steve Jobs. "Touch surfaces don't want to be vertical." That's Jobs in 2010, telling the world why Apple notebooks wouldn't feature the technology.

"You can converge a toaster and a refrigerator, but those things are probably not gonna be pleasing to the user." That one's from Tim Cook earlier this year, explaining the company's stance on convertible tablet PCs.

These were the opinions of the leaders of the most profitable tech company in the world. I believed them myself. And yet somehow, neither of them have kept me from instinctively, repeatedly touching the screen of my MacBook Air this month.

I’ve become convinced that touchscreens are the future

I review laptops for The Verge, and recently I've been using a string of Windows 8 touchscreen computers. I was prepared for disappointment from day one — prepared to say that while certain Windows 8 gestures are easier with a touchscreen, the overall idea isn't very good. I was prepared to write that the Windows 8 interface was forcing unnecessary touchscreen controls on people who wouldn't appreciate them, particularly if they were simply grafted onto a traditional laptop.

But the more I've used Windows 8, despite its faults, the more I've become convinced that touchscreens are the future — even vertical ones. 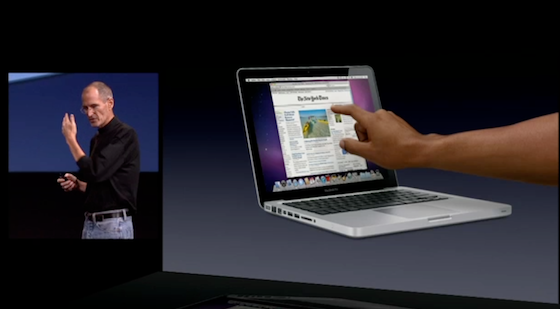 When Steve Jobs decried touchscreen laptops in 2010, he was merely relaying the common wisdom of decades of user experience research into "gorilla arm syndrome." Simply put, it's the idea that if you hold out your arm in front of a touchscreen for an extended period of time, it's not going to be particularly comfortable. However, that assumes an awful lot — what if you're not holding your arms out in space waiting to touch things, but resting them comfortably on a keyboard?

We’ve been looking at this all wrong

We’ve been looking at this all wrong. A touchscreen isn’t a replacement for a keyboard or mouse, it’s a complement. If I want to type things on my laptop and have enough room to comfortably open that clamshell and stretch out my arms, the keyboard’s still my best bet. I’m not going to touch-type 70 words per minute on a touchscreen keyboard. But when I’m in the cramped quarters of a train, plane, or standing in a line — say, when the only thing standing between a critical email and its recipient is a few dozen words and a tap of the button marked “Send” — I can grab that Windows 8 laptop by its hinged section, one hand on either side of the screen, and tap out that message with my thumbs. 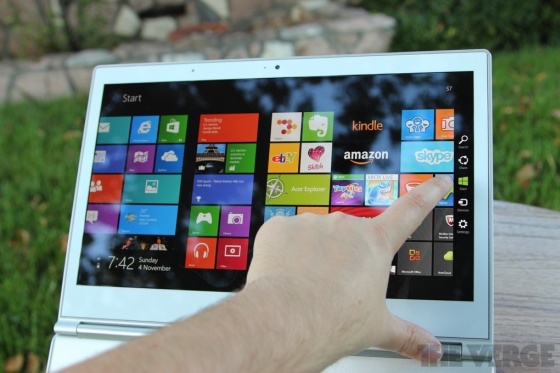 Perhaps that's an extreme example, though. Even in everyday use, I find myself touching the screens of computers (whether they have touchscreens or not) because I can do things faster and more intuitively.

If you want to launch a program on your desktop, which makes more sense? Reach down to a special glass surface and drag a finger across it just long enough to land a floating pointer arrow on top of the icon, and then tap? Or simply reach up to a visible icon and tap it? Why try to aim that pointer at a little X icon, or remember keyboard shortcuts like Alt-F4, when I can just swipe down from the top of the screen to close a Windows 8 program? Why painstakingly zoom a web browser in 10 percent increments using a disembodied keyboard or trackpad when you can smoothly manipulate it between your fingers with pinch-to-zoom?

I now find myself doing, or at least wishing I could do, these things all the time.

Even in Windows 8's desktop mode, which is still difficult enough to manipulate with touch alone that you'll probably want a mouse and keyboard, I'm constantly reaching up to that vertical touchscreen surface to grab windows and snap them to either side.

Of course, these things particularly make sense for Windows systems because of how terrible Windows trackpads are on average. We've used a few good ones this year, but on the whole they're buggy and unresponsive, and the touchscreens on these Windows 8 laptops are a breath of fresh air by comparison. Their poor performance certainly contributed to my willingness to give the touchscreen a real try. But even if they weren't so bad, I think I'd still prefer the direct control I get with the screen. After all, my MacBook Air touchpad is just fine, and I still have to restrain myself from touching its launcher bar from time to time.

At 1080p on a small screen, Windows 8 needs pinch-to-zoom for the entire OS

Unfortunately, a lot of what makes Windows 8 work well on a touchscreen depends on that screen's specifications, and not in a positive way. The larger the screen and the lower the resolution, the easier it is for you to use your fingers, because the icons are physically bigger. For instance, I found the 15.6-inch Envy Touchsmart Ultrabook 4 and 14-inch Acer Aspire M5, with 1366 x 768 resolution touchscreen displays, a lot easier to use than the pixel-dense 1080p screens on the 11.6-inch Sony Duo 11, 12.5-inch Dell XPS 12, and 13.3-inch Acer Aspire S7.

The problem is that the same low-resolution of those 1366 x 768 screens on the Envy and Aspire M5 makes the images they display comparatively ugly. Windows 8 doesn't feel optimized for touch on a small 1080p screen, and even if you turn down the resolution or the DPI to give yourself larger touch targets, most of Windows 8 doesn't scale very well. In Internet Explorer, you can pinch-to-zoom to quickly make those targets larger, but Microsoft doesn't offer anything similar for the operating system at large.

Which brings us back to the Mac. 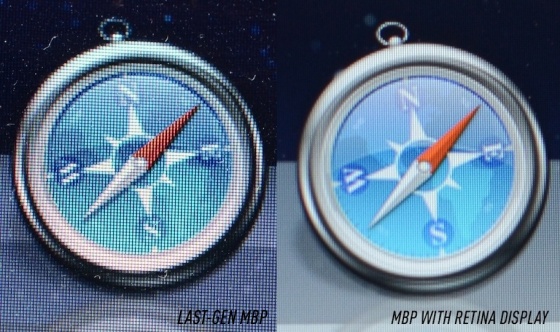 Apple already built a solution for this very problem, starting with the iPhone 4. The Retina Display uses four pixels for each one pixel on a normal screen, making the images crisper but keeping the touch targets the exact same size they were before. Pick up an iPad 2, and put a third- or fourth-generation iPad alongside, and the entire interface is the exact same size, but the newer models display much clearer, crisper images and text thanks to the pixel quadrupling. Apple's doing the same thing with its new 15-inch and 13-inch MacBook Pro with Retina Display, even though neither model has a touchscreen.

At least not yet.

Apple could swoop in yet again

Apple didn't build the first MP3 player, the first touchscreen smartphone, the first graphical user interface, the first tablet, or the first solid state drive in a laptop PC. The company typically likes to wait till a technology has matured, but when the industry still hasn't quite figured out how to use it properly. With touchscreens on laptops, we may be there again. Microsoft might have validated the idea, but now Apple has another chance to swoop in, perfecting and popularizing the very interface that it strategically ridiculed just two years ago. It wouldn't be the first time. After all, how many iPad minis come with sandpaper for filing fingers down?

When departing Intel CEO Paul Otellini said that Windows 8 was unfinished, this is what I believe he might have meant: Microsoft clearly saw where user interfaces were headed, but stopped short of optimizing its UI for the next generation of touchscreens. If what we're hearing now is true, though, Microsoft will have a chance to rectify that sooner than you might think. With "Windows Blue," the company is planning yearly updates for the operating system. If Microsoft can fix UI scaling, figure out a Retina Display alternative, or find other intelligent ways to allow users to consistently touch what they intend to touch, Windows could maintain the touchscreen lead. There's still a chance for Microsoft to avoid getting leapfrogged by Apple in 2013.