For this inexpensive Windows 8 ultrabook, does a touchscreen seal the deal?

To prepare for the Windows 8 onslaught, laptop manufacturers are trying all sorts of inventive touchscreen notebook designs. Some screens flip, some spin, some twist, and some can actually be detached from their keyboards so you can have a tablet for the road. However, the craziest new laptop design may be the simplest of all: simply graft a touchscreen onto an existing clamshell.

The $799.99 HP Envy TouchSmart Ultrabook 4 is one such touchscreen notebook, and it also just so happens to be the very first one in our labs. With a fairly standard set of ultrabook specs, a relatively thick, weighty chassis, and a 1366 x 768 screen, the 14-inch laptop doesn’t really stand out in any other way, however. Does the touchscreen make it a better Windows 8 laptop than with keyboard and touchpad alone? Is the Envy 4 a good laptop, period? Read on.

It's getting hard to tell HP's thin and light consumer laptops apart: from the upcoming $1,399.99 Envy Spectre XT TouchSmart to the lowly $579.99 Envy Sleekbook 6, they all share extremely similar chassis. Only the quality of the materials and components, the weight and the thickness really differ from device to device. So when I say that this TouchSmart Ultrabook 4 is basically an Envy 4 with a touchscreen, that's actually not very surprising.

If you're not familiar with the Envy 4, though, here's what you should know: it's a decent design for the price, but it's not quite as pretty or durable as it appears on first blush. The whole palmrest and keyboard deck are a thin brushed aluminum, as is the black lid. The bottom is completely covered in soft-touch rubber, which feels nice and adds a bit of grip. Unlike more expensive ultrabook designs, the chassis isn't totally rigid, and parts will give if you squeeze or press down.

When I reviewed the Spectre XT, a more expensive, smaller ultrabook which does have a rigid, durable aluminum frame, I remarked that the glossy black plastic screen bezel and plastic hinge covers stuck out like sore thumbs. The Envy 4 has those same parts, but given how the materials on the Envy 4 generally feel a little bit cheaper, those two don't stick out quite as much. Overall, the effect is handsome but a little bit dull, particularly given how much the silver color evokes comparisons with Apple. The original Envy 4 came in a sleek black with a lovely red soft-touch rubber base, and I miss that color scheme.

Ports are plentiful for a laptop of this class. There are two USB 3.0 sockets, full-size HDMI and SD card slots, and a spring-loaded, pull-down Ethernet jack on the left. On the right, you'll find a USB 2.0 port, 3.5mm headphone and microphone jacks, the power socket, and a Kensington Lock slot. Like with the Spectre XT, the included power supply's tip doesn't seem to socket as deeply as it should, but it didn't fall out when I shook the laptop, either. Oh, and as you'd expect, there's no optical drive. 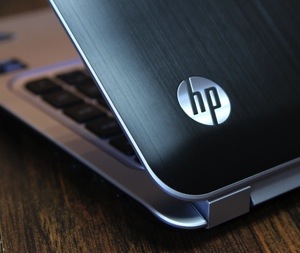 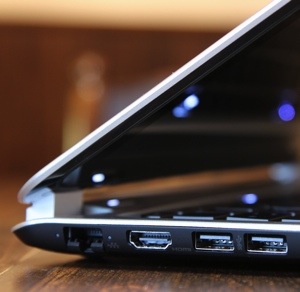 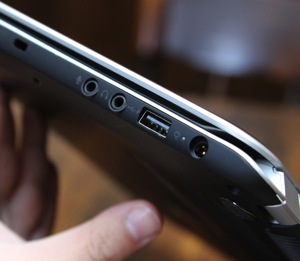 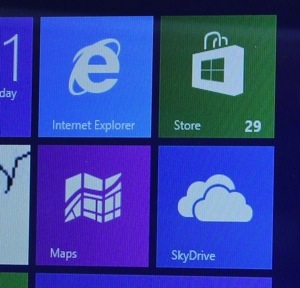 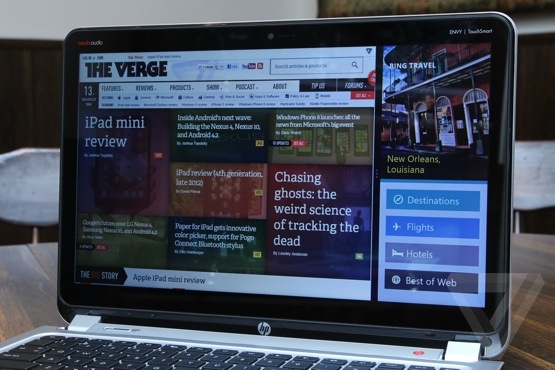 The Envy TouchSmart has a fantastic touchscreen, but a sub-par display. Let me make that clear: Every time I touched the screen, the capacitive digitizer never missed a beat. Every single Windows 8 gesture worked instantly and flawlessly. In fact, it was so much more responsive than the laptop's actual touchpad that I found myself touching the screen quite a lot.

The Envy's hinge isn't particularly robust, so you wouldn't want to actually pick up the 3.98-pound laptop by its screen and use it like a tablet. Still, you can most definitely place your forearms on the palmrest and put one thumb on either side of the display for quick multitasking, or reach out and stab Windows 8's Live Tiles with an index finger on occasion. Surprisingly, the best reasons to use the touchscreen aren't either of those, though. It's scrolling and zooming, which are so much more intuitive and responsive on the screen than with either the touchpad or keyboard.

Unfortunately, the actual 1366 x 768 LCD screen beneath that digitizer is pretty ugly. What good is a responsive touchscreen if you don't want to look at it? If you subscribe to the theory of "ignorance is bliss," you might not mind, but the washed out colors and jagged edges on icons and text make for a decidedly sub-par picture. Different shades of green and blue are difficult to tell apart, and you'll see the spaces between vertical rows of pixels anytime there's a gradient. Horizontal viewing angles aren't terrible, but they're not great. It's also extremely glossy and picks up loads of fingerprints, but perhaps that's to be expected with a touchscreen.

If the poor LCD and lack of optical drive hadn't convinced you that the TouchSmart isn't a multimedia machine, the speakers might. Though HP proudly touts Beats Audio, it pained me to listen to my music on the totally tinny twin drivers for an extended period of time. The sound isn't muddy, as I could distinguish voices and different instruments well enough, but the sound is extremely harsh. 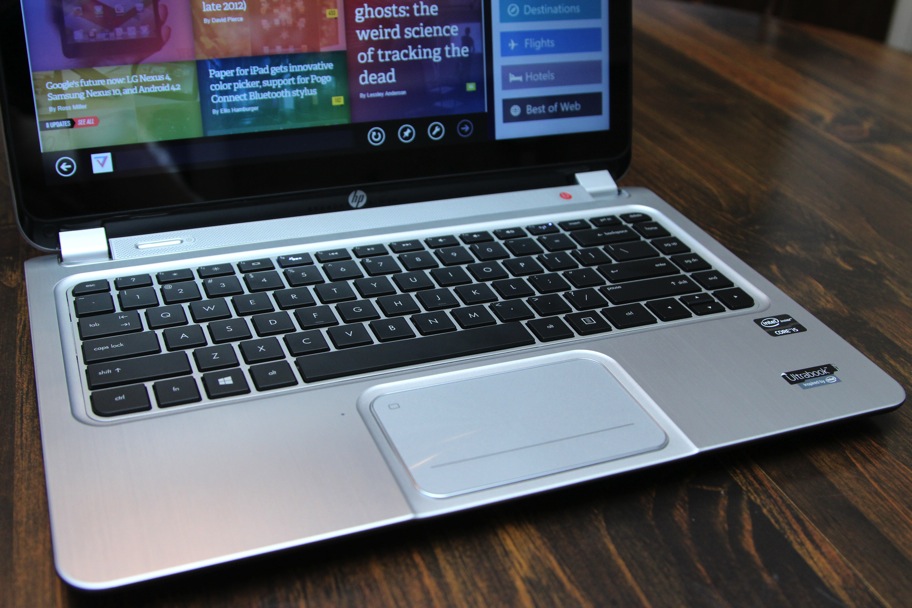 As usual, I subjected the Envy TouchSmart's keyboard to my ultimate test: I typed every single word of this review using nothing but the chiclet keys you see here. All in all, it's not a bad rack of letters, but I'd say it's a step down from the Spectre XT's comfortable array of MacBook Air-like squares. While the flat textured keycaps are similar, the throw isn't quite as deep, and they're not quite as cushioned. So far I've typed every section of this review in order, in a single go, and my fingers are already getting a little stiff from repeatedly pressing those keys down. On my review unit, a few keys (like Backspace) also press slightly unevenly, the mechanism awkwardly crunching beneath my fingers instead of smoothly sinking to the floor. The keyboard deck also gives slightly when I push down hard.

The Envy TouchSmart does have a full set of Home, Page Up, Page Down and End keys on the right side of the keyboard, and a handy function row at the top. I can't, for the life of me, understand why HP puts the Wi-Fi toggle button right next to the mute button, but both light up different colors when they're activated so you won't stab at them blindly in the dark. Speaking of lighting, you can get LED backlighting for the entire keyboard for an extra $20. It's a must, but know that you can't set it to different levels of brightness, only turn it on and off. 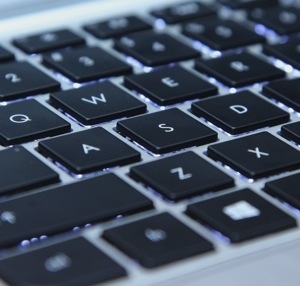 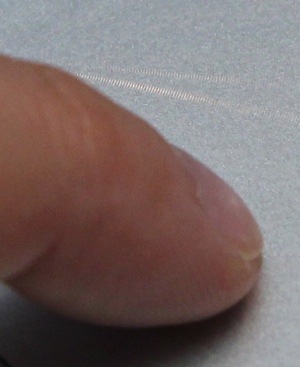 As far as the touchpad is concerned, it's pretty decent, but it seems that Windows 8 hasn't been the cure-all that some vendors had hoped. The Synaptics ClickPad has nice little concentric ridges carved into its surface, which makes an excellent texture for pointing and scrolling, but both of those gestures felt a little bit sluggish compared to using the touchscreen alone. The Spectre XT's touchpad was better in that regard.

If you manage to find Synaptics' settings page, there are loads of items you can tweak and some features (three- and four-finger gestures) that you can turn on, but also one you'll probably want to turn off. By default, the touchpad also supports Windows 8 edge gestures, but in my experience they often activated when I didn't want them to, and failed to reliably activate when I did. Again, the touchscreen comes in very handy when the touchpad is deficient. 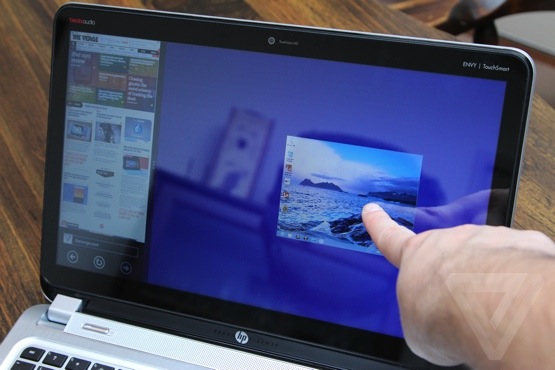 Why the RAM? With a bunch of Windows Store and desktop apps running simultaneously, Pandora playing in the background, two push Gmail accounts and a bunch of auto-refreshing Chrome tabs, I easily sucked down 3.9GB out of that 4GB of memory without trying very hard to stress the system. Just in case it might be a Chrome issue, I tried Internet Explorer instead, but Norton Internet Security still reared its ugly head to warn me about high memory usage. Just for giggles, I also checked out the RAM footprint after a fresh reboot — with no programs running, in other words — and the system had consumed about 1.6GB.

Most ultrabooks don't play modern games very well due to their reliance on integrated Intel graphics, and the Envy TouchSmart 4 is no exception. I'm not quite sure why HP limited the notebook to integrated graphics, though. The non-touchscreen version of the system can be configured with a discrete AMD Radeon HD 7670M GPU for a $75 premium. If the TouchSmart uses the same chassis, why can't it support the gaming graphics as well?

If you're looking for a laptop that boots quickly, the Envy is a great pick, though: I regularly clocked it at 12 seconds from pressing the power button to arriving at a usable Start Screen, although startup apps on the desktop did take a little while longer to load. Waking the laptop from sleep also happens extremely quickly, though it can be erratic at times. I measured as short as 1.2 seconds, and as long as five seconds, before the screen came back to life.

If you were hoping that Windows 8 would remove software bloat, we're afraid you'll be disappointed. HP's bundled a whole variety of apps on the Envy TouchSmart, including some potentially useful things like Netflix, Kindle, eBay and Skype, but also the typical annoying, reminder-filled trial of Norton Internet Security, a variety of HP apps, and the WildTangent suite of low budget pay-to-play game titles. 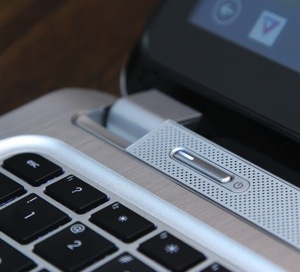 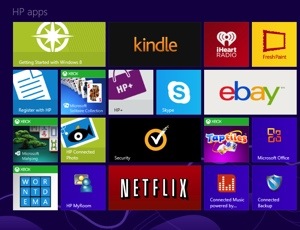 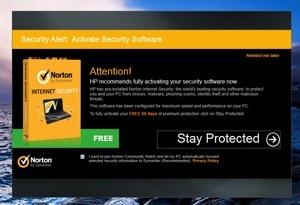 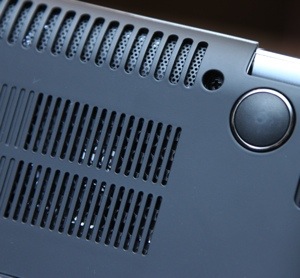 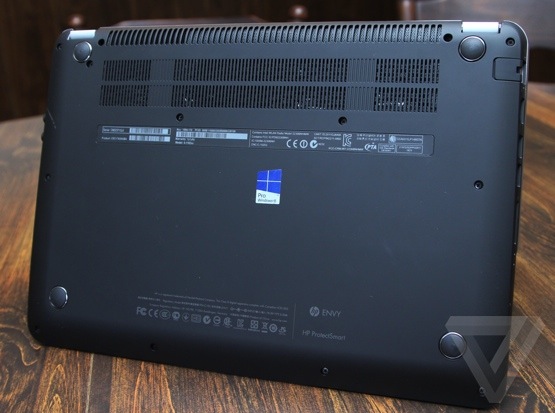 When it comes to battery life, Apple's MacBook Air and the first wave of Intel ultrabooks that followed set a pretty high bar. Despite their thinness, many managed to last five, six, or (very rarely) even seven hours of real-world usage on a charge. The Envy TouchSmart only got about four solid hours in my daily usage, which involves all those auto-refreshing browser tabs, background audio and so on that I describe above. Surprisingly, that's not too far off the mark: HP claims the laptop should last "up to 5 hours" on a charge. With the advent of Windows 8, is HP steering clear of misleading advertising for its products? If so, the company should be applauded.

Most HP notebooks I've tried have done a pretty good job of keeping both the palmrest and the base of the laptop cool, and this one is no exception. The soft-touch rubber paint also doesn't hurt, adding an additional layer of insulation. Still, the cool comes at a slight cost: The tiny noisy fan came on quite often during my testing, and seemingly at random. It's not very loud and I found myself tuning it out, but if that sort of thing annoys you, it could be a problem.

In the case of the HP Envy TouchSmart Ultrabook 4, you can indeed judge a book by its cover. It’s a moderately capable, moderately attractive laptop at a moderately reasonable price point, but it’s also thoroughly average and honestly a little boring. However, it does indeed prove the value of a touchscreen in Windows 8, even if it has to be grafted onto the display. For what's basically a $50 premium over the vanilla Envy 4, I'd definitely recommend adding the touchscreen. However, unless the price and design are just what you're looking for, I don't think I'd recommend this laptop at all: the LCD screen is an eyesore, the speakers are an earsore, and the battery life isn't impressive.

If you must have a touchscreen, if you like HP’s aesthetic, if you don’t already have an ultrabook, and if you can’t afford to spend more, the Envy will do the job. My advice, though, is to wait for a better touchscreen laptop to come along.