Last week, Android Police received some information about a new venture for Google Wallet. According to the screenshots, Wallet would soon support a physical credit card that could be used in place of any of a user's other cards, provided the accounts were linked up in the user's Wallet. Now, TechCrunch has uncovered a bit more evidence that this somewhat odd new option will be coming soon, in the form of a Google Wallet support page making clear references to the "Google Wallet card."

It's particularly noteworthy that page noted that any Android device running 2.3.3 or higher would be compatible with the Google Wallet card, which will could significantly increase the market of users out there who could take advantage of Google Wallet features. With NFC not being required, Google could conceivably bring the service to other smartphone platforms, though there's no evidence yet of such a move. Unfortunately Google has since removed all references to the rumored card, though this screenshot combined with last week's leak makes it look like we'll see this service revealed sooner than later. 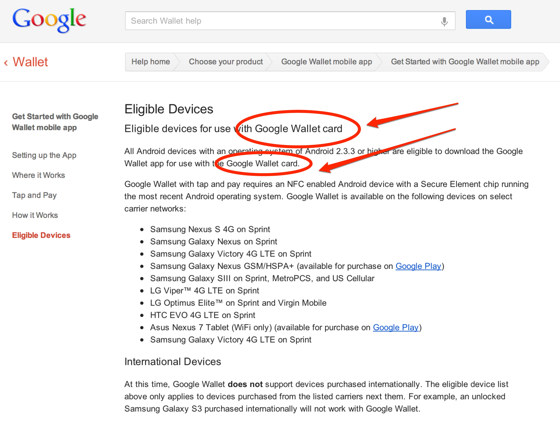