Share All sharing options for: Life telepresent: working vicariously through the Beam robot

Last week I took a trip to Willow Garage in the heart of Silicon Valley. It's not a hard place to find, and I was on time for my 11AM appointment. Just one problem: I was supposed to be at Suitable Technologies at 11AM, not Willow.

Suitable is a recent spinoff of Willow Garage, which might explain my confusion. In fact, as I stood befuddled at Willow's reception desk, I was greeted by Scott Hassan, the former CEO of Willow Garage, and current CEO of Suitable.

His original plan, he explained, was to greet me at the Suitable offices via Beam, his brand new telepresence robot. I'd flipped the script on him, requiring an in person meeting, but he didn't seem to mind too much. He led me back to his office, which was well-equipped for making a good tele-impression. In addition to the large number of screens requisite for a nerdy CEO of a robotics company, Scott had some diffused overhead lighting, a fancy studio-style boom microphone, and an HD Logitech camera mounted above a large LCD pivoted to portrait mode. The screen showed a live video stream of Suitable's office, from the point of view of a robot.

Scott sat down at the desk, and began to pilot his Beam. He introduced me to a couple of his remote colleagues, and together they began the spiel.

Willow Garage was founded by Scott six years ago, backed by mysterious venture capitalists, with the purpose of accelerating the birth of the robotics industry. The company is responsible for the open source operating system, ROS, which has helped transform and unite robotics research and, increasingly, commercial robotics. Suitable is one of Willow's many spinoffs, and this time Scott decided to go with.

Like many of Willow's spinoffs, Suitable began as an in-house project. Its first telepresence robot was called Texai, an intimidating beast that looks like a bachelor's home entertainment system, glued on top of an industrial-sized vacuum cleaner. The company built 30 of the robots, and was ready to ship, but prerelease customer feedback wasn't favorable, and it scrapped the project at the last minute.

So it started over, and, as of today, Suitable is shipping its $16,000 enterprise-focused robot, dubbed Beam, to a few hand-selected customers.

It's only futuristic in the vein of a Bose Waveform radio

In the corner of Scott's IRL office was a dormant Beam in its charging station. The device is, as Scott explained to me, purposefully unassuming looking. Unlike the Cylon-like Texai (not one of the sexy newer Cylons, one of the original toaster Cylons), the Beam looks boring. It's only futuristic in the vein of a Bose Waveform radio, if a Bose Waveform radio was 62-inches tall, with a 17-inch screen mounted atop it. The goal is for the device to disappear, and the tele-commuter's presence to be emphasized.

The comparison to the Waveform is most fitting in terms of the device's large speaker grill. Inside is enough wattage to let you shout across a large room, along with an array of microphones capable of directional noise cancellation. As fascinating as video chat by robot is, facilitated by a large camera eyeball at the top of the bot, audio is still top priority.

An out of body experience

After a brief tutorial, Scott let me take over the controls of his Beam over at Suitable. I was immediately hooked. It's hard to describe the sensation of telepresence, or "remote presence" as Scott likes to call it. It's not like video chat, and it's not like driving a remote control car. It's mostly like a video game version of real life.

In fact, the controls are video game simple: directional keys to move and turn, hold the shift key to move fast. Additionally, and even more intuitively, you can use your mouse to steer. There's a second wide angle camera pointed at the ground, which helps see obstacles like trash cans and feet, and when you click and drag on that display, it projects a "yellow brick road" (curving rail tracks) that shows where your clicking will take you. The nearer the mouse is to the base, the tighter your turn radius is, and when you pull away the bot speeds up.

The rest of the robot's controls are just as intuitive. You can click to zoom and pan in on a portion of the screen, and when you start to move again it zooms out automatically. There are volume controls, buttons to hang up or pause the call... and that's about it.

Soon I was roaming through Suitable's facilities, which is equal parts software engineering, mechanical engineering, manufacture, and testing. I found a ping pong table near the cafeteria, and almost challenged someone to a game, but then remembered I had no arms. What really surprised me, though, is that I met almost as many fellow Beam pilots as flesh-and-blood humans (known in Suitable parlance as "locals").

Life with no arms

While Willow Garage is located midway between San Jose and San Francisco, the originator of the Texai project is actually from Indiana. Engineer Dallas Goecker wanted to get to know his colleagues better, so he had a laptop placed on top of a cart, and would have his video chat self wheeled around the office. Before long he was cannibalizing parts from Willow Garage's PR2 robot to build something he could drive himself.

I met Goecker in an electronics shop downstairs at Suitable, after hopping to another Beam — Suitable's office has no elevators, and doesn't recommend riding one with a Beam anyway. Goecker was there by Beam. He was currently having a local make some changes to "the playground," a Beam testing course.

"Every once in a while I have to travel to do something physical," he says, but for the most part he can work from home just fine — he has his own lab there, and lives a bit more comfortably than his colleagues, saddled by their Silicon Valley rents.

Suitable has plenty of other similar employees. Jeremy Leibs lives in San Francisco, and Beams in 2-3 times a week — saving himself about 5 hours a week of commute time. He travels to Suitable to do physical tasks because it's "nice to have arms," as he puts it.

Meanwhile, Josh Faust has chosen a life of homelessness: he's currently in Maui, and he's going to Tahoe for ski season soon.

In fact, sometimes the locals feel in the minority at Suitable. One engineer, visiting from Romania, admitted to feeling a little lonely after hours: "I'm here and nobody will go out with me."

It bears repeating that I "met" all of these people via Beam. The audio and video quality was sufficient to allow for Beam-to-Beam interactions, which were only barely inferior to IRL ones. At one point I was huddled up with three other Beams, picking the brains behind them and attempting to learn the proper etiquette for Beam "body language," when a local spoke up: "This is kind of weird, I'm the only human here."

"This is kind of weird, I'm the only human here."

Most remote employees at Suitable work with dual screens, so it's easy to tell where their focus is. I myself was taking notes on my tour, and so I frequently looked down to write and the conversation would pause accordingly. I didn't get much experience being a local, so I don't know the etiquette or comfort level there — the 100 pound robot can be a little intimidating when looming over your chair. Additionally, everyone at Suitable is practiced at dancing around mobile Beams, so it's hard to tell how well I was at driving. 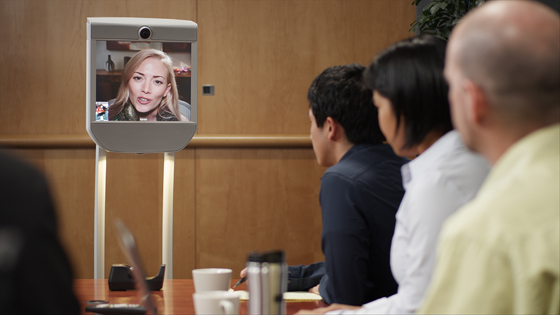 My entire experience with using the Beam was hiccup free, and that's by meticulous design — beyond just the obvious cheats I enjoyed in Scott's office of a fancy microphone and light, and the direct microwave network link between Willow and Suitable's offices (ed. note: not connected to the internet). Scott explained that Texai was built with off-the-shelf components, and each one was at 80 percent of what it needed to be — which works out to roughly zero percent reliability. They realized that they had to compete with telecom reliability, which is in the 99.99 percent range.

Beam's primary challenge is network reliability. The "robot" has no automation, and therefore can't roll around hunting for a signal, or return to its base on its own. Suitable has put two high-end Wi-Fi cards into the device, with one of them searching for a better connection at all times, making a seamless handoff when it finds one. The robot can also support 4G modems and even custom 900MHz networks if it needs to.

In fact, Suitable is so concerned with network reliability that it's currently limiting its customer pool to nearby companies, so it can more easily service them. In addition to the robot's cost, there's a $2,400 yearly service fee per device, and Suitable is also spending considerable time reworking the Wi-Fi networks of clients up front.

Scott calls Wi-Fi networking "insanely complicated," and that you need a lot more access points than you think. It’s turned a robotics company into a networking company in many ways. While I was in Scott's office, an IT guy logged in to the Beam behind us, testing packet loss from a client's location.

Networking is just the most obvious part of making the Beam a success, however. As I look back on my time with the device, any number of problems could've made the experience less enjoyable — and ultimately off-putting. Video degradation would make it harder to see the expressions and body language of the locals; a weaker speaker or microphone would make communication with other Beams impossible; hiccups or difficulty in steering would make navigating a busy office a chore; a briefer battery life (Beam is rated at 8-10 hours) would be annoying; and any instability in the software or hardware would mean a dead Beam would be left stranded, requiring locals to play doctor.

During my factory tour, I saw assembled Beams being put through 48 hour mechanical torture tests before being shipped to companies, and each component is tested individually as well — Suitable uses some of Willow Garage's expertise in putting together its own over-engineered $400,000 PR2 robot. Scott said the goal is to make a product that can last for three years of constant use, which translates to around 10 years of average lifespan. 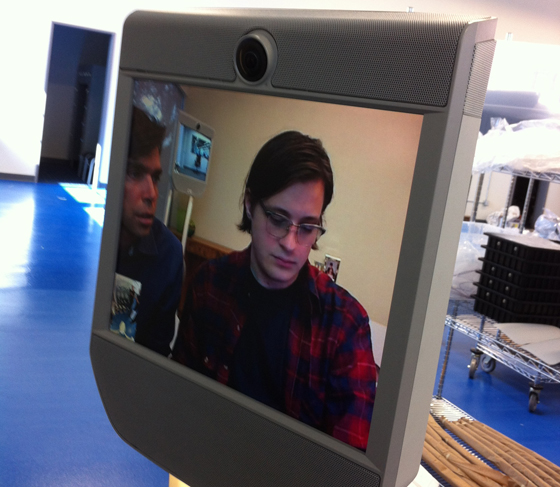 In the Wall Street Journal, Rachel Emma Silverman recently wrote about her experiences telecommuting with an Anybot QB. Her primary problem was networking, and the device failed often enough that it required a full-time babysitter. But with the Beam, there's nothing to babysit. Outside a power button, there are no local controls for the Beam — there's no touchscreen, and you don't "answer" a "call" from a Beam, the telecommuter just appears at her own initiative.

If the Beam can get past the babysitter problem, the networking problem, the price problem, and the cultural acceptance problem, I think it has a chance to be a serious transformation in how people work. Telepresence has always made sense, it just needs to be frictionless before it can take off — it's 99.99 percent or bust.