Blogging with Medium, the odd new product from Twitter's founders

Blogging with Medium, the odd new product from Twitter's founders

Can Ev Williams and Biz Stone build a better blog?

Blogging was once heralded as a great equalizer, seizing power from big media gatekeepers and redistributing it to the common internet user. But these days, super-posters are sucking up much of the oxygen — look at tastemaker Jason Kottke, snarky culture writer Carles of Hipster Runoff, and marketer Seth Godin, who shows up on the first page of a Google search for "blog." It's an intimidating scene for a newbie blogger.

Medium, the new self-publishing platform from two of Twitter's co-founders, Evan Williams and Biz Stone, promises to eliminate the need for bloggers to also be marketers. "We want to help the best ideas and stories have the biggest possible impact," Williams said in an email. "For the vast majority of people, Medium will have a higher return-on-investment for writing than publishing one's own blog."

The core idea is that regular people want to consume content published by other regular people. Medium automagically curates a stream of the posts that are most relevant to you — which means the authors of those posts are also reaching their ideal audience.

"Medium will have a higher return-on-investment for writing than publishing one's own blog."

Medium then susses out the best content using a combination of algorithms and human guidance, and promotes via official collections like "Front Page Picks." The startup just showed its commitment to quality by hiring Kate Lee, the well-established New York literary agent, as its director of content.

Williams and Stone helped create two wildly successful self-publishing services, Twitter and Blogger, and Williams is even credited with inventing the word "blogger." The big question is, can they do it again?

Medium isn’t as radically different as Twitter was when it started, but Williams and Stone have made a few unconventional moves. Posts are organized into "collections," which are sort of like group blogs with strangers. Collections can be thematic, with titles like "When I Was a Kid" or "I met my ____ online." These can also function as writing prompts — I wanted to write a test post but didn’t have any ideas, so I scrolled through the collections until the theme "This Happened To Me" triggered a memory from last year.

There’s no hard evidence of demand for what Medium offers

Medium has been slowly inviting people off its wait list since August, so there’s already a bunch of content — and it’s surprisingly good. Log in, and you'll be greeted with a diverse mix of content: a picture of birds in the snow, a love story, and a first-hand account of donating a bag of cash at Planned Parenthood dressed as a cat burglar. I enjoyed the stuff I read more than I expected to, although it’s hard to say whether that was because of Medium’s secret sauce or because the early adopters are already good writers. 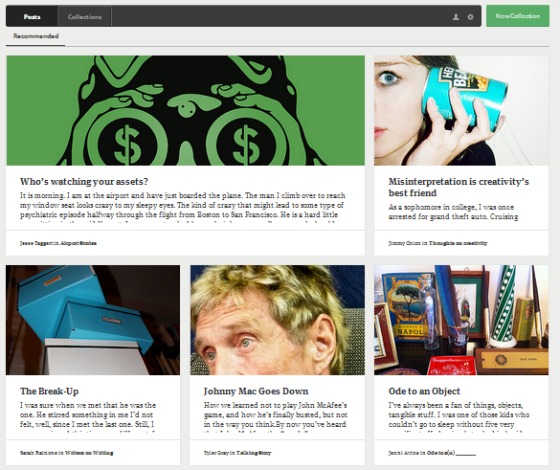 Michele Catalano, a music blogger who considers herself an amateur writer, is one of Medium’s early users. She’s published 25 posts on Medium, including a series called "100 word stories" that she felt was perfect for the platform.

"It's all creativity. There's no feedback, no replies. It's writing for writing's sake," she said. "There's no count of who reads or likes. The validation we're so used to with social media isn't really on Medium. It's a good break from it."

However, she spends most of her time reading on Medium rather than writing. "I like to really get into what other people are doing with the site," she said.

Medium is buzzy, name-branded, and Silicon Valley-born, which suggests it may not play well in the heartland. However, Medium’s design is earnest, encouraging, and unintimidating, the kind of thing that wins over the Pinterest or Meetup.com crowd. The stories there are heartfelt, like what might come out in a creative writing class where only the kindly teacher is allowed to speak.

"The validation we're so used to with social media isn't really on Medium."

Medium also captures the excitement that comes with writing for the web, Medium adviser and well-known writer and blogger Paul Ford said in an email. "It's pretty, it's easy, and there's no baggage," he said. "It’s a very sincere piece of software."

The site launched with a skeleton set of features, so it’s still very early to judge whether Williams and Stone are on to something. Medium needs a critical mass of bloggers and readers, and it needs to nail its mission of delivering the right content to the right audience. (The company is hiring a recommendations engineer to "create a personalized experience for Medium readers.")

Of Medium’s competitors, which include Wordpress, Svbtle, and many more, most are not focused on content discovery. Tumblr has tried to do a bit in this area through its staff blog, "Radar" feature, and event-specific tags. Branch, which is also backed by Williams and Stone, also makes an effort to help users find new stuff to read.

This kind of targeting is similar to when Facebook picks which stories to show in your news feed, Twitter suggests users you may want to follow, and Google uses your browsing history to help decide which stories to show you in Google News. Still, it’s difficult to do such recommendations well.

If Medium is successful, Williams and Stone plan to monetize it via advertising, along with premium content and features. That day is far in the future, however. Medium’s recommendation system is still in its infancy, as are its promotional machine and an "alternative" commenting system. "We're not even to a real v1.0," Williams said.

Medium looks like any one of dozens of pretty new social media sites to launch in recent years. But Williams and Stone have much greater ambitions: rethink core assumptions around things like reverse chronological order, raise the level of quality on the web, revolutionize publishing. I expressed skepticism that Medium will be able to change people’s reading habits. "As for people only reading friends, big names, and media brands: Maybe that's evidence that there's a better world possible," Williams said. "That's our belief."