Offline: into the woods

Offline: into the woods

I have a friend named Cash Lawless. First name Cash, last name Lawless. He’s a hair dresser, naturally. But outside of his profession he’s the epitome of masculinity: he builds motorcycles, he plays street ball, he breaks hearts, and his name is Cash Lawless. He’s recently started to hike the Appalachian Trail, one section at a time, in a "roughing it," self-sufficient sort of way. I knew about this hobby, and admired it, but never considered going along. Until I did.

Cash doesn’t do anything halfway. Before he even hiked his first section of the "A.T." (as the Appalachian Trail is referred to by the canteen-and-neckerchief crowd), Cash tested out his sleeping bag and tent on the roofs of friends. He started showing up places in his water-wicking pants, and broke in his hiking boots religiously — which he refers to as the "Ferrari" of hiking boots, without irony.

I, on the other hand, a day before leaving for the A.T., had zero gear appropriate for surviving a day trip outside of New York City limits, much less three days in the wilderness. And so Cash and I went shopping, and I learned a very important maxim:

"A hiking trip doesn’t begin when you toss on your backpack and take your first step into the wilderness. It starts when you enter REI."

Before I entered REI, I guess you could say I was "cautiously optimistic" about the whole thing. I had no idea what the hell I was getting myself into, but that was half the fun — how would my body / mind / spirit react when it figures out what the hell it’s gotten itself into, 10 miles into the forest? Mostly I was looking forward to spending a weekend with Cash, who is a fantastic conversationalist, and now an endless font of survival wisdom — much of it gleaned from Bear Grylls, but still.

After I left REI, I was ecstatic about the trip

But after I left REI, I was ecstatic about the trip. REI has just endless shelves of little gizmos to make camping better than real life, or at least more vital somehow. I acquired an air mattress that’s probably more comfortable than my own bed, and rolls up into roughly the size of a football, but what I was really hooked on were the safety items. I became fascinated with a series of different survival kits, which would include a wide range of things, like a thermal blanket, fishing lure, signal mirror, compass, flint and tinder, and some twine in a waterproof pack. I immediately started fantasizing about how great it would be to get lost, and have to make a fire, and catch fish with the dinky lure, and live off the land while search parties are organized in my honor. It took a ton of self control to avoid buying, like, three of the kits.

In addition I borrowed a backpack and sleeping bag from my roommate, and bought a wool under layer and wool socks at Patagonia. I bought boots, too, but not real hiking boots, just nice boots. Then I got an insane quantity of high calorie snack food from Duane Reade, at Cash’s urging, because he claimed he’d gone hungry one trip and "never again."

The night before leaving, Cash wanted to watch some Man vs. Wild episodes on Netflix to get us psyched up, but because I don’t use the internet we ended up watching Romeo + Juliet on DVD instead, which ran way past our bedtimes. We were basically like giddy children, too excited for Christmas to fall asleep and make it come sooner. But morning finally came and I packed frantically and we were off.

To me there’s something beautiful, something right, about the fact that in New York City you can hop on a train, then hop on another train, and be just about any kind of place — a beach, or New Jersey, or America’s Capitol, or the woods. We headed for the express stop at Garrison, NY and got there in a couple hours. Once we were on the train out of Grand Central, we both pulled out our phones, gave them one last longing look, and turned our devices off. This isn’t something Cash did for me, mind you: it’s part of the Official Camping Experience. It’s how you get away when you’re pretending to be lost in the wilderness, 40 miles north of Manhattan. 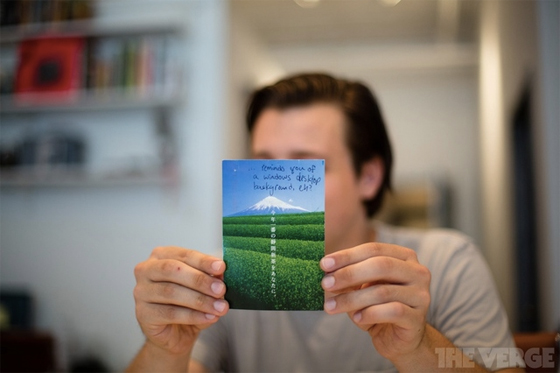 We got semi-lost within the first 30 minutes, and didn’t make very good time the first day. When it got dark we scrambled to set up camp, and I read Winnie the Pooh stories to Cash via my 90-lumen headlamp while he boiled our water with his portable stove.

Most of Cash’s wilderness-related fears hinge around bears and broken ankles. He warned me about how your imagination runs wild once you’re in a tent and it’s quiet other than the wind rustling the leaves. I scoffed at this, because: 1. it’s winter and the bears are hibernating, and 2. I’m not paranoid.

I was certain we’d set up our camp wrong

But before I ducked into the tent, at around 8PM, ready to rest my trail-weary bones, I saw two pairs of night hikers, only minutes apart from one another — a strange sight after seeing zero serious A.T. assailants all day. They seemed to have headlamps with possibly even more than 90 lumens to them, and had those fancy ski-pole-style walking sticks, and seem to know what they were doing, and weren’t going to bed at 8PM like little babies.

Then I got scared. I got really scared. As I nestled into my borrowed genuine down sleeping bag, and tried to make a comfy pillow out of a faux down jacket, my heart was pounding. Every rustle of a leaf wasn’t a bear coming to eat me, it was a high-lumen hiker coming to judge me. I was certain we’d set up our camp wrong. We were too close to the trail, maybe. Or we shouldn’t have had a fire. Maybe our bear bag wasn’t high enough up — it seemed a bear could totally reach that if it tried. I mean, I wasn’t scared a bear would get our food, I was just scared someone would decide a bear could get our food, and therefore think less of us.

I realized I’d trusted Cash entirely to make my weekend a perfect blend of survivalism and comfort. We’d be true outdoorsmen, and have a great time doing it. It would be camping done right. We would "leave no trace," as the wilderness-appreciation mantra goes, but that didn’t mean… well, what did that mean, exactly? Were we doing this right? Were we the wrong sort of campers? What made Cash an expert on all this anyway? What had he gotten me into?

Were we doing this right?

I just wanted to go home. I wanted to be in NY, where I know I belong, where I’ve earned my place and pay my rent. At the very least, I knew I didn’t want to be where I was, next to a trail full of snickering judgmental hikers, caught in a tent with a clueless guide who idolized Bear Grylls but didn’t even know how to hang a bear bag right.

My heart was pounding in my ears. I didn’t want to be the wuss, but I started to consider talking to Cash about my doubts. He was fast asleep, so I sung songs to myself to make sure he got at least one good R.E.M. About 40 minutes in, I woke him. He was not happy about that.

"I think we should pack up and go to the campsite marked on the map."

I explained my fears, except I left out the "clueless guide" part. I suggested a mythical Trail Police that I feared would find us and wag their fingers while we sat shamed inside our dorky two-man tent.

I persuaded Cash to at least look at the map. He sighed and flicked on his light. I fished the map out of my bag and unfurled it across our sleeping bags. I figured with a couple hours of night hiking, we could get to a designated camp site. Sure, we’d feel silly packing up the tent and pulling down the bear bag so soon, but it was better than the alternative of the Trail Police.

Cash pointed out that it was actually more like a three or four hour hike in the daylight, and much longer at night. Plus, he knew, it would take a good hour or so to pack up.

"We’re not going anywhere tonight," he said, firmly. He wasn’t speaking to me like I was being irrational, which is maybe a good technique for speaking to someone who is being irrational. He was simply tired and unhappy to be awake and possibly reconsidering bringing me along entirely but now he was stuck with me and if he could just end this conversation we’d both fall asleep and forget all about this silly conversation tomorrow morning.

But ultimately, Cash got me to shut up and go to bed with three simple words:

That’s all I needed to hear, really. I had to believe that I wasn’t the only schmuck from the Big City who camped a few feet off the trail at 8PM while countless grizzled night hikers with embossed "A.P. T.P." badges shuffled past. I had to believe I was one of the cool kids.

We both slept terribly that night. It turns out, much of my noisy heartbeat was caused by the fact I was sleeping with my head slightly downhill. Once I finally figured that out, I attempted an in-tent pivot, which woke Cash up again. And then I could never get my pillow right, and I kept hearing leaf noises that sounded like night hikers, and my dreams were strange and hopeless.

The next day Cash tried to pretend like the late night freak out didn’t happen, but things were a little awkward between us as we packed up and set forth. Eventually, though, the ice thawed. At my urging, we attempted some night hiking of our own, and it turned out to be really great, and I told him in detail the plot of my sci-fi novel — which he really likes, and he’s not just saying that if he doesn’t mean it. After covering double the distance of the prior day, we hung up our scavenged walking sticks and set up camp. This time we pitched the tent far away from the trail, in a really great spot, and didn’t see any night hikers at all. We slept like babies, and the next day, with around 22 miles under our belts, we had a leisurely walk to the train station and caught the 1:04PM back to New York City.