Rumored to hit by the end of the year, Twitter's image filters have officially been released for the company's Android app, and will be coming sometime today to iOS (see update below). The app now offers eight filters, including "vignette, black & white, warm, cool, vintage, cinematic, happy, and gritty" tones. It also allows users to preview filters for their images in a grid format, and includes standard editing features like cropping, zooming, and auto-image enhancement. Aviary, a company that partners with companies like Flickr, Imgur, and Yahoo Mail, says "each filter was designed from the ground up exclusively for Twitter." 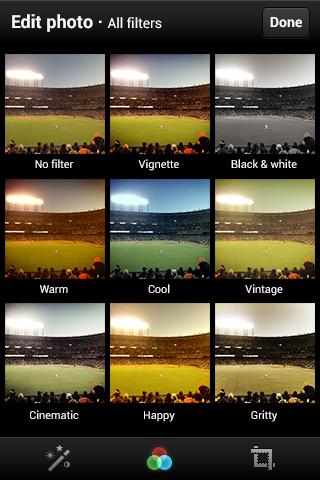 The update is thought to be a direct response to Facebook's purchase of Instagram earlier this year. Since then, the relationship between the companies has appeared tense; on Sunday, Facebook's decision to end support for Twitter cards came into effect, wiping out Instagram photos on the popular microblogging service and leaving only links to the images hosted on Instagram's website. While Instagram CEO Kevin Systrom assured users last week that the company would always have a strong relationship with Twitter — he said users will always be able to tweet from Instagram — that relationship now looks more competitive than cooperative. In the spirit of competition, both companies had announcements about image filters today.

Update: It took a full day, but the updated Twitter app for iOS is available now.