Lapka for iPhone: five sensors to measure the world, inspired by NASA and Yves Saint Laurent

Share All sharing options for: Lapka for iPhone: five sensors to measure the world, inspired by NASA and Yves Saint Laurent

Lapka’s tagline may be the “Personal Environment Monitor,” but its name is rooted in the Russian word for paw. “We want to be the rabbit’s foot that you bring with you all day to make sure everything will be fine,” Creative Director and co-founder Vadik Marmeladov says. “It’s like a talisman, which you hold to be safe.” Lapka goes on sale today, a $220 set of sensors for detecting radiation, electromagnetic fields, humidity / temperature, and perhaps most interestingly, a sensor for measuring how organic your food is. But are we really in danger of radiation poisoning or overexposure to electromagnetic waves on the streets of our neighborhood?

“It’s hard to find someone who’d say ‘I’d love to measure radiation’ on a day-to-day basis,” says Marmeladov, but that’s exactly what he intends to convince you of. Each sensor is molded from wood and injection-molded plastic, and looks like it would fit better on the shelf of an Apple Store than in your high school’s science lab. In fact, each sensor plugs into your iPhone’s headphone jack as if it were a Square card reader.

Like Verge editor Ben Popper, Marmeladov discovered that feeling and measuring the invisible things around you can be strange and enlightening. The pack of sensors is about environmental life-logging and keeping a journal of the invisible fields you inhabit every day. Lapka is also about finding the joy in building something cool nobody has tried before. Marmeladov, dressed from head to toe in black and donning a modern mohawk, states proudly: “Our goal is to mix Yves Saint Laurent and NASA together.”

Geiger counters haven’t exactly experienced a "consumer revolution," still spitting out simple numbers on tiny pixelated screens or analog line gauges. There just aren’t many startups democratizing sensors outside the now standard mix of GPS units and accelerometers inside cell phones. But if Kickstarter success Twine is any indication, having amassed $556,000 in backing on a $35,000 goal, there is indeed a market for such things. But whereas Twine is a hackable blue box meant to make your home and surroundings "smarter," Lapka aims to simply make the sensors we already have, like Geiger counters and EMF detectors look and feel a whole lot nicer. "All of these things exist in your life, but they’re all ugly and they’re $300 each," Marmeladov says. Since Lapka uses the iPhone as its brains and power source, its creators were able to drastically shrink down the sizes of its sensors. "You don’t need to put brains and screens inside each sensor," lead engineer Sergey Philippov says. "There are no power supplies, processors, screens, or batteries in Lapka, because we already have those things on an iPhone."

Philippov was left with the challenge of what to display onscreen, and how to take advantage of the iPhone’s powerful processor; they had to think up a completely new and accessible way to visualize numerical scientific readings, Marmeladov says. The app turns out to be an exercise in simplifying numbers incomprehensible to the untrained eye. A combination of letters and abstract particles in motion represent the healthiness (slow-moving particles) or sickliness (fast-moving particles) of your test subject. You might not understand the units that show up (Lapka does show numerical units), but you’re sure to understand that the color red alongside frantic little dots and blobs is bad news.

Each successive measurement you take turns into a block on the Lapka app’s home screen. Each block is imprinted with the symbol of the sensor used to acquire each reading, and will topple over and tumble around as you tilt your iPhone. As each day passes you acquire one more home screen inside the Lapka app, which makes flipping through your readings intuitive. There’s also a list view for browsing readings en masse — a quick way to turn days of readings into a calendar of journal entries. "We wanted to build a story of a thing you use daily," Marmeladov says. "It’s where this design thing comes to life." Each entry is uploaded to the cloud, and shareable via Facebook, Twitter, email, and SMS. No matter where you open a Lapka URL, the results (and accompanying animation of particles) shows up and animate just like on the iPhone.

Lapka’s organic food detector isn’t as magical as it sounds. It’s a stainless steel "probe" that, when pierced through raw fruits and vegetables tests electrical conductivity — "which correlates to the relative concentration of nitrate ions left behind from nitrogen-based fertilizers" — which can suggest that your carrot isn’t organic by today’s standards. There are various fruit and vegetable presets inside Lapka that denote different threshold for nitrate content — and tell you when you might want to be worried. 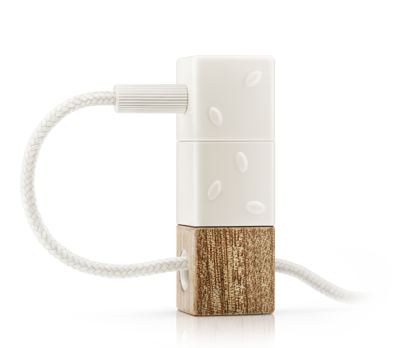 "A good quality humidity detector’s going to cost you $200," Marmeladov says, while Lapka’s is part of a $220 bundle and includes a built-in thermometer as well. And that’s part of the deal — since he thinks measuring humidity alone is pretty boring. This sensor’s meant to help you quantify exactly what conditions you sleep or work best in so you can reproduce them. "When we debuted Lapka, we got a lot of emails from moms, since there are specific guidelines for newborns about EMF and humidity," Marmeladov says. 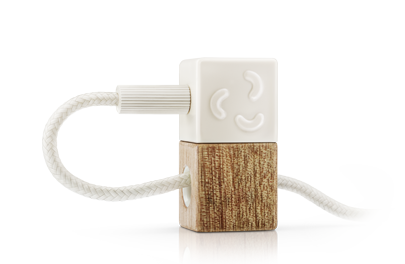 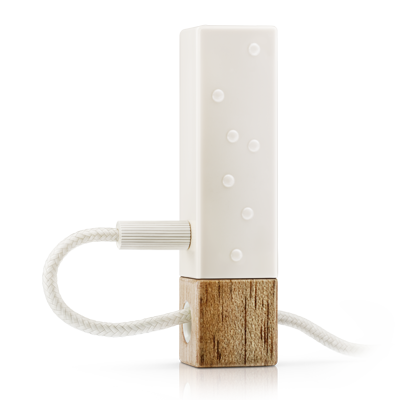 Lapka’s EMF (electromagnetic fields) sensor measures low and high frequency waves around you. Low frequency waves, measured in microtesla, are emitted by objects like charging bricks, power lines, washing machines, and refrigerators. High frequency waves, measured in volts/meter, come from cellphones, cell antennas, and microwaves. The EMF sensor is designed to help you find the spots in your home with the lowest electromagnetic pollution, and thus the places most suitable to sleep or to put a baby’s crib, according to Marmeladov. 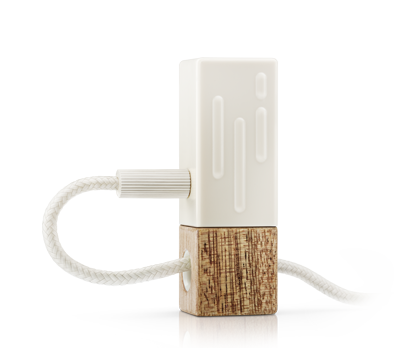 ‘Luxury tools’ in the iPhone age

In finding a market for Lapka, Marmeladov looked to both Apple and Dornbracht, a premium bathroom and kitchen fixture company. "[Dornbracht] is a very good example of the correct luxury approach for our daily tools," he says. "Everyone can afford most of their products, but at the same time, these products are not for everyone. Hopefully we’ll achieve the same with Lapka."

Marmeladov hails from the fashion and graphic design world, having worked on everything from tablet apps to big magazine spreads. He was inspired by design icon and Braun chief designer Dieter Rams to move from working on paper to working in three dimensional objects. Rams’ shelf system company Vitsoe inspired him most. "For him it’s not just about hardware, but about graphic design," he says. "Lapka was inspired by this universe, but is not necessarily from the ‘iPhone universe.’" An obsession with Dieter Rams and his creations is not uncommon among modern "functionalist" product designers and Jony Ive design acolytes, but Marmeladov claims he comes from a different angle. "We use Apple guidelines," Marmeladov insists. "We do not copy or simulate Apple design, because it isn’t right, and because it’s just not possible." Instead of ripping off Apple’s brushed aluminum or tinted glass, Lapka instead favors matte plastic and Sapele wood from Brazil — light materials soft to the touch.

Another step for indie hardware

Another step for indie hardware

Although Lapka was designed in Moscow, Marmeladov and co. decided that the US would be a great place to launch — a country fixated on fashion trends, and saturated with luxury items people still gobble up during times of recession. The team recently relocated to San Francisco to work full time on Lapka and upcoming projects. Yet, will anyone bite on "high design" versions of tools we already have? "Lapka is a set of existing tools which have been re-imagined and crafted from scratch," Marmeladov says. "It’s really an accessory… It’s another pair of shoes, or another bag, or another pair of nice glasses." Lapka is a very nice thing but not necessarily a vital thing. It’s greatest virtue is that it doesn’t look or work like anything else, and comes from a rich body of inspiration across fashion, graphic, and product design.

"A combination of these things is what eventually will make Lapka a different tech company," Marmeladov says. Like BERG, the company behind Little Printer, Lapka is evidence that small teams of people are now quite capable of building hardware startups. And when the iPhone’s handling most of the hard work, the greatest challenge is figuring out what you want to plug into it.

Even if Lapka’s short term prospects at money-making are unclear, a future measured by distributed sensors could be exciting. Waze has crowd-sourced mapping roads and traffic conditions, and Lapka — wired into the cloud — could chart various conditions across the world. "We could build a map of the world using these measurements and using future sensors [sold a la carte] such as an air quality sensor," Marmeladov says. In just a few minutes anyone can tweet Instagram photos, and now readings from Lapka’s radiation sensor. "But mostly, this is fun," Marmeladov insists. "It’s a first step in the right direction."