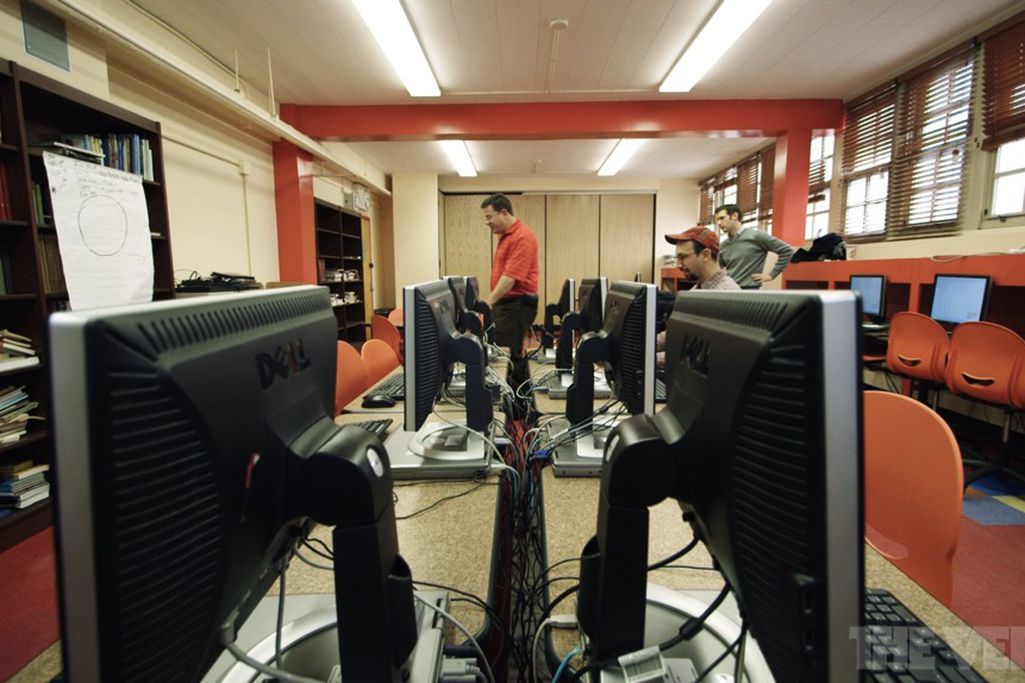 Robert Hornik has seen a lot in his two decades as a teacher at the East New York Family Academy in Brooklyn. “It used to be common to see police helicopters circling overhead,” he recalls. But things in the surrounding area have improved dramatically since Hornik first came to the school in 1995. These days Hornik is more focused on mundane details: “Simple stuff, like just making sure we have enough computers for every kid to work on.”

Family Academy relies on a mish-mash of laptops and desktop PCs, many more than a decade old. Screens are cracked and keys are missing. The school’s annual budget for technology is around $12,000, barely enough to pay a part-time IT staffer to keep the few machines they have up and running. Last year, at any one time, the school had about 20-30 computers functioning for a student body of over 450. “You would come to class and just have to double or triple up with other people on one machine,” says Abimael Hernandez, a senior. “The machines were just really, slow, ya know. A pain to use.”

All that changed six months ago, when Family Academy became the first New York City public school to pilot a service from a local startup, Neverware. Hornik is friends with Michael Zamansky, a computer science teacher at Stuyvesant High School in Manhattan who is tapped into the local startup scene. After hearing about Neverware, and familiar with Hornik’s frustration about the state of Family Academy’s computers, Zamansky connected the two.

Neverware uses a technique known as desktop virtualization. Instead of relying on individual PCs or laptops, Neverware installs a single custom server designed for the specific school. This master machine, dubbed the “Juicebox”, is the brains of the entire system. The individual computers become “thin clients,” essentially dumb screens that are powered by Neverware’s Juicebox. A workstation could continue to operate, even if the hard drive was removed.

“The transformation was incredible,” says Hornik. Ten year old machines were suddenly running Windows 7 at blazing speed. “We went from having around 20 computers that performed terribly to 150 machines that run like they are brand new.”

The challenges facing the Family Academy are familiar to public schools around the nation. And things are about to get a lot worse. “For schools, there has always been this boom and bust cycle,” said Kevin Strohmeyer, a director of product marketing in Citrix’s Desktops and Apps division, which provides virtualization services for Fortune 500 corporations and universities around the country. “If they can get X amount of dollars to buy PCs this year, with no guarantee they can get that support next year, they buy all new computers. Seven years later they are still waiting for the next big budget cycle or bond issue.”

“I think right now our public school system is facing what they call in the military a VUCA movement: volatility, uncertainty, complexity, and ambiguity,” said Jim Kolhmoos, head of the National Association of State Boards of Education. “Budgets have been cut and they are not coming back.”

Most troubling is a new federal mandate which states that all public schools will have to administer their standardized tests digitally by the 2014-2015 school year. “Virtually every state and district will have to make investments in broadband infrastructure and new devices to participate in these tests and, for some, these investments will be very significant,” says Douglas Levin, Executive Director of the State Educational Technology Directors Association.

Sheila Richards, the principal at the Family Academy, put it another way. “I was at a meeting with a number of local principals when they first told us about the new requirements for digital testing. We just laughed. It didn’t seem possible.”

With this national computer crunch on the horizon, desktop virtualization is experiencing renewed interest. Perhaps what’s most interesting about the approach is how it actually harkens back to the roots of modern computing. In the 1960s, when mainframe computing was the dominant paradigm, IBM manufactured giant machines the size of a small house that cost millions of dollars to build and operate. The roots of today’s virtualization techniques were used by IBM to divide up the power from this single computer among dozens of workstations. 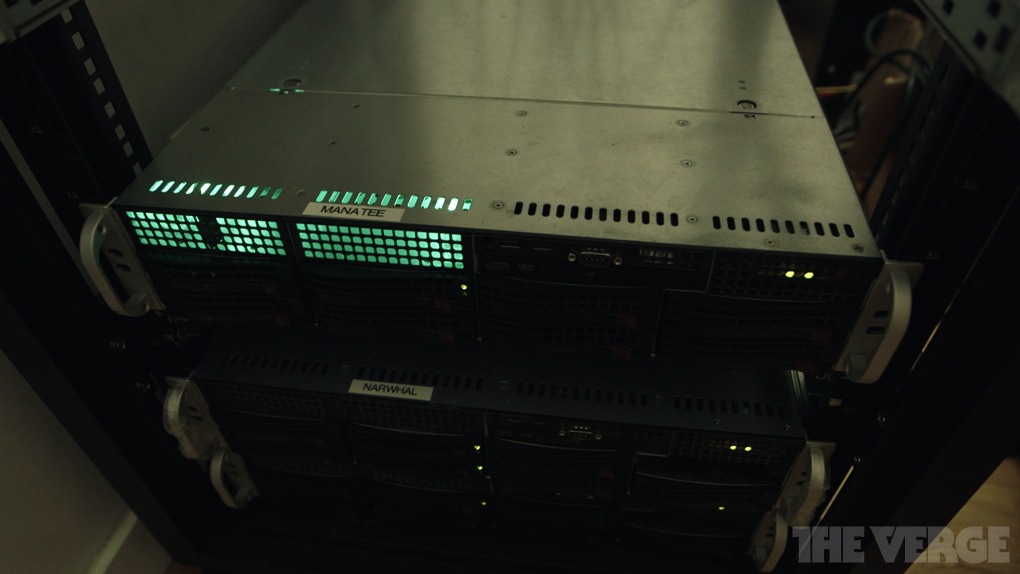 Neverware is the brainchild of Jonathan Hefter, a Long Island native who attended the Wharton School with dreams of becoming a banker. By the time he graduated in 2009, however, there were few jobs and little positive energy around Wall Street. So he holed up in his parent’s basement, studying server-based computing, advanced networking, and cloud delivery techniques, coming up everyday at six in the evening for a home cooked meal. For exercise, he volunteered with the local fire department.

When he formalized the idea for Neverware, Hefter found a spot at the New York startup incubator, Dogpatch Labs. He raised a round from friends and family and hired a pair of employees. As talks with the New York Department of Education progressed, the company quietly raised $1 million in a round lead by Thrive Capital, together with Khosla Ventures, General Catalyst, GRP, and Raptor Ventures. They moved into a larger office at the chic co-working space, General Assembly. And this summer they began their first pilot program at the Family Academy.

“This is about getting schools out of the wasteful, expensive cycle of having to replace or upgrade their computers every 4-5 years,” says Hefter. The team of six at Neverware is taking on industry giants like Citrix and VMWare. Its strategy is to avoid selling to large corporations and focus exclusively on education, where budgets are tight. “Citrix and VMWare are big successful companies. But they don’t offer an end-to-end solution specifically designed for schools’ needs,” says Hefter.

Citrix, for example, only offers software; schools must work with a separate hardware vendor who partners with Citrix. Typically that means installing a new data center and machines built to work with them. Neverware offers a single box which is compatible with almost any unit schools might have. “They are like contractors offering to build you a custom home,” says Hefter. “We are producing our own pre-fab unit with school’s needs in mind.”

The difference in price can be significant. The bids from more traditional vendors who applied to build a desktop virtualization system for the Family Academy ranged between $25,000-60,000 per year. “Our sweet spot is between $12-15,000 on an annual basis,” says Hefter. 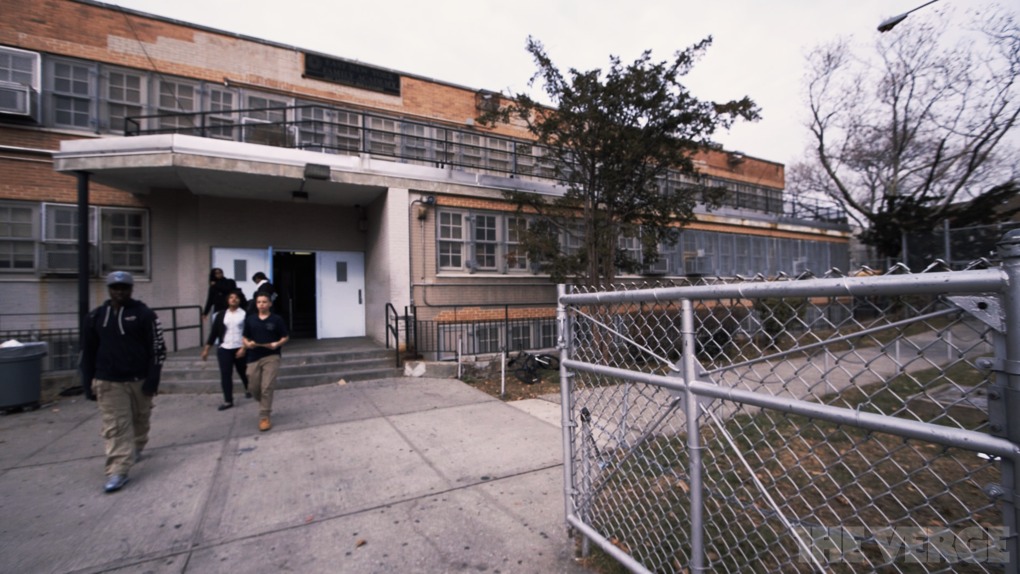 I stopped by the Family Academy on a recent morning to sit in on one of Hornik's philosophy classes. The day’s lesson was on the difference between street crime and white collar crime. Kids were surfing the net for information on Bernie Madoff.

As a test, we unplugged one of the computers, a Dell Latitude c510 purchased in 2005, from Neverware’s system and powered it up next to one connected to the Juicebox, just to get a sense of how things were before the change. Before the old machine could fully boot up to the home screen, the Neverware unit was up and running, opening Internet Explorer and streaming video from CNN without a hitch. With the old machines, confessed Hornik, it could sometimes take as long as ten minutes to turn them on and access a single website.

The new system has changed how the students interact, not just with their day-to-day school work, but all the modern obligations requiring them to stay connected. “It was really frustrating before,” said Olaoluwa Onabanjo, a senior in Hornik’s class. “The computers were so slow and when you did get them work, sometimes they would just shut down, like for no reason. So you would be scared to use them cause you could forget to save and then lose all your work.” With Neverware’s system in place, Onabanjo has begun staying after school to work on her college applications. “It’s great because you could do some work, save it to the web, and feel sure when you come back it will still be there.”

In order to allay privacy concerns around student data, Neverware’s system is a private cloud which exists on site at the school. Even If the internet connection went down, the virtual desktops would continue to run so long as the Juicebox on premises had power. All the machines at the Family Academy run Windows. “In the New York City school system the majority of schools have licenses through Microsoft, but if someone decided to use a different operating system, we could support that as well,” said Hefter.

A few students sneaked glances at their smartphones during class, quick to pocket them when Mr. Hornik was walking close by. Many education technology specialists say that the ability to bring your own device (BYOD), will be a powerful trend over the next decade, allowing students to work on the go with the phones and tablets they are most familiar with. “We could support any device that connects to the Neverware network, wired or wireless,” says Hefter. “But there are security risks and licensing requirements that make this very complex, so we’re not focusing on that right now.”

The Family Academy was the first school to sign up with Neverware. Since then the company has signed on two additional schools and is in active discussion with around 50 more. “For now we’re focused on just the New York City public school system,” says Hefter. “It makes it easier to sell to one client with one set of licenses and procedures. It would be a very big client base on its own.”

Financial savings are one part of the picture for New York City. The environmental gains are another. “We have been able to obtain, through the City Surplus program, machines that various city agencies have deemed completely obsolete,” says Hornik. “We got computers from the department of Probation in the Bronx, from the Police Pension fund in downtown Manhattan, monitors from agencies like Small Business Services. With Neverware, these computers run like new.” Instead of paying to dispose of units, the city can recycle them for productive use. More computers in classrooms and fewer gathering dust on the shelf.