Results from the 2011 Trends in International Maths and Science Study show that the United States is still behind other countries in terms of education. According to the report, the US placed 9th overall in fourth grade mathematics tests and 11th at the eighth grade level, coming in behind South Korea, Japan, Singapore, Russia, Hong Kong, Taiwan, and England. 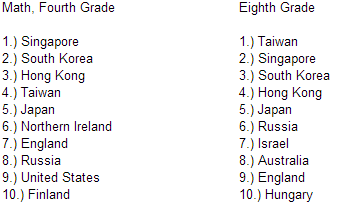 The country didn’t fare much better in the sciences either: while the US came in 6th at the fourth grade level, the country failed to make the top 10 at the eighth grade, instead placing 11th. 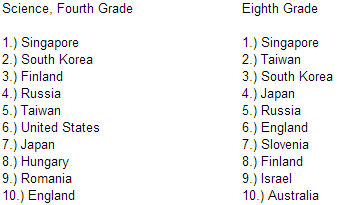 Still, the 2011 results do show a slight improvement over the same tests in 2007. Back then, the US placed 11th and 10th in fourth grade and eighth grade mathematics respectively, with the nation also achieving 8th and 11th places in science exams. If you're wondering where China ranks on the global scale, you'll have to keep guessing: mainland China hasn't taken part in any of the tests. And despite the fierce competition, the results show that the United States is still well above the global average.