Can India make a usable $35 tablet?

After missteps, the Aakash2 looks to find out

Share All sharing options for: Can India make a usable $35 tablet?

Last October, when India unveiled an Android tablet several years in the making called the Aakash, the government's mission was to begin lowering the price of entry for access to the internet. In a country where only eight percent of 1.2 billion people are online, it was believed that a price set at roughly 20 percent of the lowest monthly income levels would open the free exchange of information to millions. It could help India's 220 million students get a better education. It was a fantastic — and arguably unrealistic — vision considering the price India targeted: $35. If pulled off, it'd be the least expensive tablet in the world.

It wasn't to be. The Aakash only appeared to be a reality in October 2011, when a press conference "launched" the tablet and showed off 500 units made by a British company called DataWind. The model had a 7-inch, resistive touchscreen, a 366MHz processor, and 256MB of RAM. It is supposed to sell to students for $35, but only after a subsidy from the Indian government.

"This innovation... seeks to empower and give access to quality education for all."

Soon after delivery began, it stopped. The project’s technology partner, the Indian Institute of Technology Rajasthan, said the units didn't meet its standards; some tablets froze up, while others wouldn't start. DataWind CEO Suneet Singh Tuli, however, tells me that the institute "mismanaged" deployment of the tablets. It gave them to university students who already owned computing devices and simply "asked them what they thought." They weren't impressed, and, according to Tuli, the institute needed a scapegoat and claimed that the tablets weren't "usable in the Indian environment" because they didn't meet US military ruggedness standards. And considering the meager hardware specifications, there's little doubt that the Aakash failed to pass basic usability standards, too.

At that point, the $35 tablet didn't appear to have a promising future.

However, instead of abandoning or delaying the project, the Indian government selected IIT Bombay to replace IIT Rajasthan as technology partner, and by the Spring of 2012 work was underway on a new version of the tablet, called the Aakash2. By the time it’s completed, the 7-inch tablet represents a significant improvement over its predecessor. It runs Android 4.0 Ice Cream Sandwich on an 800 x 480 pixel capacitive touchscreen, powered by a 1GHz processor and 512MB of RAM. The price comes in at 2,263 rupees (about $40) — less than the unsubsidized Aakash 1, which the Indian government purchased for closer to $50 each. When it launches, students will pay just $20 for the tablet and $8 more for an optional keyboard attachment thanks to subsidies.

The program looks to be back on track. India wants to order 100,000 tablets — from five different manufacturers — that are to be delivered by the end of 2012. DataWind, however, wins the entire contract with a bid that's 18 percent lower than the closest competitor, according to Tuli.

"If Samsung wanted to do [what we're doing] they certainly could."

But just how, exactly, is DataWind planning to make the tablets for so cheap? What could its margin possibly be? Tuli is surprisingly forthright when I ask him directly, telling me that the company makes about a 5 percent margin on the Aakash's hardware. To produce a usable tablet for $37, DataWind does what it can to remove what Tuli calls the "fluff": middlemen are cut out of the supply chain and unnecessary features are tossed aside. For instance, the Aakash2 lacks Bluetooth, GPS, and HDMI, and it doesn't have faster 802.11n Wi-Fi or an ambient light sensor for automatic brightness adjustment, either. There's only 4GB of expandable storage, and it's rated for just three hours of battery life.

To minimize the impact of middlemen’s margins DataWind focuses on the LCDs and touchscreens needed to make the tablet. To shave off "roughly 30 percent" of the cost of the LCDs, the company purchases the parts that make up the panel from different suppliers, and then have it assembled. Touchscreens are an opportunity for the company to save even more money. DataWind makes these on its own in a fabrication facility in Montreal — saving an estimated 70 to 80 percent compared with purchasing the finished product. This is the company's ace in the hole, giving them "a huge, huge price advantage," according to DataWind CEO Suneet Singh Tuli.

That effort still only leaves DataWind with a 5 percent margin — not enough for a healthy business. Tuli isn't concerned, however, because the company plans to earn money over the life of the product from recurring revenue streams. Many pre-loaded apps from DataWind's partners have Yahoo ads built-in, and the company also receives a cut from media sold on the device. The plan is to increase margins by over 20 percent thanks to such sources. Additionally, the company is marketing and selling consumer versions of the Aakash in India, called the Ubislate 7Ci and 7C+, which start at 4,499 rupees (about $83). Some of that extra cost is due to roughly 25 percent in taxes and duties that the Indian government doesn't charge on units that it is purchasing, but DataWind does make a better margin on the consumer units as well.

"It wasn't a supply issue at all."

Even if DataWind's business model is sound, there's the problem of ramping up production. The Indian government and DataWind appear to be confident; India's president Pranab Mukherjee unveils the Aakash2 in November, and it’s presented at the United Nations a couple of weeks later. When I mention the difficulties with the original Aakash, Tuli is unequivocal when he tells me "it wasn't a supply issue at all." However, all may not be as it seems. After I inquire about the status of the 100,000 unit order, Tuli informs me that 1,500 tablets were delivered in September, and 10,000 more the month after. He doesn't seem certain on when the complete order will be delivered, telling me "maybe January, end of January, early February." He says that the company is building more assembly plants in India, and that "as products mature the pace will accelerate."

If there's any hope of sticking to India's plans to equip all 220 million students in the country with tablets over the next five years, more manufacturers will be necessary. Once the 100,000 unit shipment is complete, an additional five million-unit order split between five manufacturers will be placed. And demand shouldn't let up anytime in the foreseeable future: India plans to use the money it would have previously spent printing and distributing schoolbooks to offset the cost of the tablet initiative, but the devices are only expected to last three years before needing to be replaced with newer tablets.

That’s not to say there aren’t reasons to believe the Aakash2 has a chance to succeed. IIT Bombay has learned from the mistakes of IIT Rajasthan before it: instead of a "haphazard" deployment, Tuli says the tablets are being integrated with curriculum at schools. The Economic Times reports that IIT Bombay is holding workshops with 13,000 teachers to train them on proper use of the tablet. A professor in charge of the program at the institute tells the paper that "come January... students from 250 engineering colleges will be studying on Aakash tablets."

More importantly, the Aakash performs fairly well. After spending a day with a commercial version of the tablet — the Ubislate 7Ci — I find that it's usable. You can turn it on, browse the web, send and receive email, read books, and play simple games. There's even a VGA-quality front-facing web cam and a microphone for video chats, as well as access to the Google Play store.

"I take it as a compliment when someone refers to my product as a child's toy."

There are some concerns, however. The capacitive touchscreen is frustrating to use, it's difficult to read the display in the sun or at any angle, the battery wears down quickly, and performance drops if multiple apps are open. I’m also a bit concerned about durability of the device: the back plate is removable, and the processor, motherboard, battery, and other components are completely exposed. Neither the volume rocker nor power button are held in place, and I nearly lost them when I opened up the back. The speaker also wiggled loose. While Tuli hopes people will think of the Aakash2 like a "child's toy" and not worry about it being tossed around, the hardware isn't at that point yet. 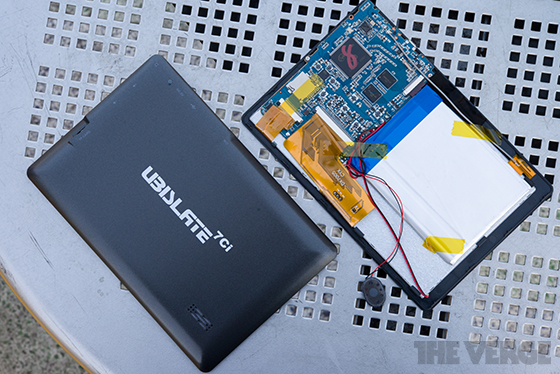 Despite these issues, it's exciting to think of the difference the Aakash would make if it placed into tens (or hundreds) of millions of students' hands. While that's not certain, one thing is: tablets will only continue to get cheaper and more powerful, and if India is looking to pave the way, it can only mean we'll get there quicker.