"HTC’s product strategy is changing," I’m told over a cup of hotel coffee. "In the past, the company was more about ’let’s implement the latest and greatest spec faster than anyone else.’" But I’m assured that the myopia is coming to an end. During his two and a half years on the job, HTC’s Chief Product Officer Kouji Kodera has been overseeing a shift away from a mountain of different models, and toward a future of products differentiated by their software and hardware design, typified by the company’s well-regarded One series handsets. Kodera is back in his native Japan today for a press conference heralding the launch of its first 1080p phone, the J Butterfly, and set aside a few minutes to talk about what HTC’s newly-found design savvy and re-entry into the Windows Phone market mean for the business’s future.

HTC was an early mover in Windows Phone, putting out the lion’s share of devices in 2010, before Microsoft decided to shack up with Nokia in a $1 billion strategic partnership. Now, HTC is back with a pair of attractive new devices, albeit ones that borrow more than a little from the Lumia school of design. "Do you really think so?" responds Kodera, recoiling at my implication, and revealing a hidden black Lumia 920. "I saw your question, so I thought I should be ready," he says, laughing, as he lays it next to his own 8X. Picking up the two phones, I’m forced to admit that they look less alike in person than I had imagined from press photos. 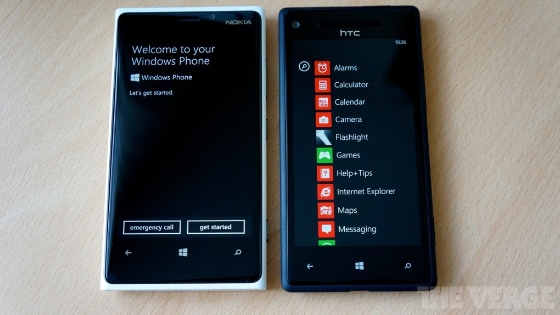 Kodera is eager to put some distance between the two companies’ design choices. "If you look into the fashion industry, there are colors of the season all the time. In the fashion industry, those are decided two or three years in advance of those materials arriving to the market… and for those designers who get that information, it’s coming from a common source. There are three influential color designers in the world, all in France and Europe. That’s only three firms. So the source is very limited and everybody goes there, regardless of industry." We had heard before that HTC and Microsoft worked closely together on the project, so I ask how much influence Redmond had on the hardware designs. The answer is a terse "zero." Kodera explains, "they’re saying ’you’re the specialist, and you should go with what is best… the only thing they kept asking was, ‘how can you differentiate it with your Android products?’"

The One X set a high bar for Android phones this year, but as much as Sense 4 improved on earlier versions of the company’s skin, we still thought that the phone would have been better with stock Android. What are the chances that we’ll see something with the finesse of the One X with stock software down the road? "The Nexus devices are Google’s lineup," explains Kodera, "but in general, we’re very proud of HTC Sense, and we’d like to continue shipping it on every device." Not exactly encouraging.

Earlier this year, Asymco famously estimated that HTC was one of only three manufacturers actually making money in the smartphone industry, but with HTC’s flagging performance over the past few quarters, I’m curious how the company thinks it can maintain its profitability. Kodera explains that for HTC, more SKUs meant less marketing money per handset, and less chance of cultivating a hit. The new strategy is "less product, more exposure on those… and bringing some real differentiated factors to the market, rather than just bringing many new products." I ask if this pursuit of fewer SKUs is causing resistance from operators, which are known for demanding strict control over how their devices are designed. It hasn’t been an issue, says Kodera — operators are changing now that they’re seeing "different success models."

"THE BIGGEST DIFFERENCE IS THAT GOOGLE DOESN'T DO ANY ADVERTISING FOR ANDROID."

I can’t help but ask, in light of HTC’s incredible shrinking product portfolio, why get back into Windows Phone at all? The company is already doing as well as any of its competitors (save Samsung) just selling Android phones. While Android OEMs end up paying some royalties, Windows Phones have an outright licensing fee — not to mention a mere sliver of the smartphone market. "While it’s true that Windows Phone has a license fee and that the core Android OS is free, once you add software your license fees go up accordingly," explains Kodera. "The biggest difference is that Google doesn’t do any advertising for Android, while Microsoft pays to promote Windows Phone on its own. So you can’t compare categorically just on the basis of license fees… the bigger factor is how strong the products are and whether or not people will buy them."

"I think we canceled six or seven tablets."

What about tablets? Does HTC think it can build one that people will want to buy? "We’re interested," says the CPO. "We’ve made a lot of concepts, but we haven’t been able to find something that is really strong yet. Actually, I think we canceled six or seven concepts since [the Flyer and Jetstream]. What we decided is we will really focus on our product, we will re-do it as many times as we need until we get a concept and a product that we feel comfortable with."

As little success as Windows Phone has had elsewhere, the platform has been all but non-existent in Japan. Only a single Mango device has ever been released, last year's Fujitsu’s IS12T, launching with little fanfare, and not gaining enough traction to lure anyone else to the market. Kodera thinks that for Windows Phone to really take off here, it will need significant support, both from carriers and from the good people in Redmond. Apps for the local market are crucial — something is desperately needed to navigate Japan’s spaghetti-like train system, for instance, and Kodera thinks that subsidies to developers are needed to grow an app development ecosystem.

Finally, conversation turns to the spec arms race and smartphone displays. Just this year, 4.7-inch 720p phones were on the front lines of the war; now, the 5-inch 1080p screen on HTC’s J Butterfly and Droid DNA are pushing through the ranks. How high can we go before customers decide enough’s enough? Kodera agrees that we’ve more or less hit a ceiling with 5-inch screens, but that’s no reason to think image quality will stand still. "We’re going to see smaller displays that are capable of that resolution, so pixel density is going to keep going up." So we shouldn’t get our hopes up for a 5-inch 4K phone? "They’ll probably be able to do it," he says, smiling. "It’s just a matter of time."