Facebook today announced a revamp of its privacy settings page and Activity Log, which lets you view everything you've ever posted or been tagged in on the social network. Most noticeably, Facebook’s top toolbar now includes a padlock icon for quick access to privacy settings, displayed in FAQ format. The three most commonly asked privacy questions are listed first: "Who can see my stuff?"; "Who can contact me?"; and "How do I stop someone from bothering me?" Clicking any of these links pops you straight into the corresponding privacy settings, where each setting’s language has been made a lot more clear.

"How do I stop someone from bothering me?"

Another big change Facebook has made is to the app permissions workflow. When you sign up for Facebook-connected apps like Spotify, you’ll no longer see dense data-packed dialog boxes asking for your profile, your friends, your music, and more. Now, one box pops up asking for access to your profile, while another pops up later on asking if Facebook can publish your listening habits to your profile. "We are splitting read and write," Facebook's Director of Product Sam Lessin says. "They are two very different flows, but you want to have them as in context as possible for what you're doing." 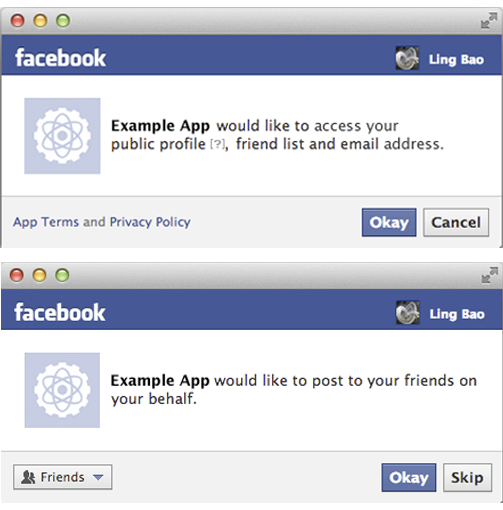 Aside from new privacy features, Facebook hopes to illuminate the meanings of old ones by adding pop-ups and messages across the site next to buttons you might click. Next time you click an "x" to hide something from your timeline, you’ll be notified that the post has been removed, but will still show up in friends’ News Feeds and other places on Facebook. That’s the way it has always worked, but not everyone has realized it. On a side note, Facebook plans to formally retire the "Who can look up my timeline by name?" option in favor of more granular options like "Who can message me?" and "Who can friend me?" "Humans have a limited bandwidth for understanding how privacy works," Lessin says. "When things get complicated, the more likely it is that you’ll run into surprises — and we have a fundamental premise that surprises are really bad news for users." Facebook hasn’t exactly made itself known for transparency when it comes to rolling out new features, and its new explanation boxes should help. 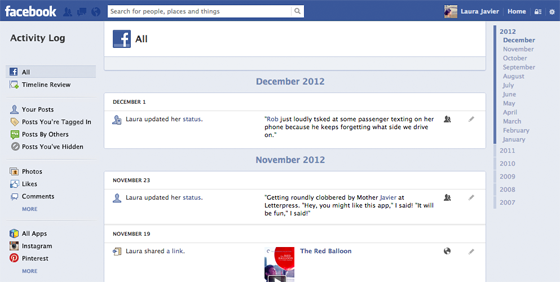 Finally, Facebook has updated Activity Log, a feed of everything you’ve posted, liked, and tagged on Facebook you can access via a button on your Timeline. Activity Log worked well enough before, but has been given a facelift to make navigating all the stuff you’ve uploaded over the years (and all the songs you’ve listened to on Spotify) a bit simpler. Activity Log now includes a Timeline-esque right sidebar for picking months you want to jump back to. On the left is a list of ways you can filter content, like by Photos, Likes, apps, and posts you've been tagged in. Activity Log is essentially a console for checking whether certain photos and posts are viewable to friends, or to the public. A new tool lets you edit this kind of information en masse, like if there are a bunch of pictures you want friends to untag, for example.

"There's a deep confidence we want people to have in our platform," Lessin says. "Our end goals require users to feel comfortable in how our system works," and today's updates have taken some big steps to do so. Facebook's privacy settings are far from perfect, but at least now the most common questions users ask are placed front and center. The new Activity Log and settings windows will roll out to all users "at the end of 2012," Facebook says. 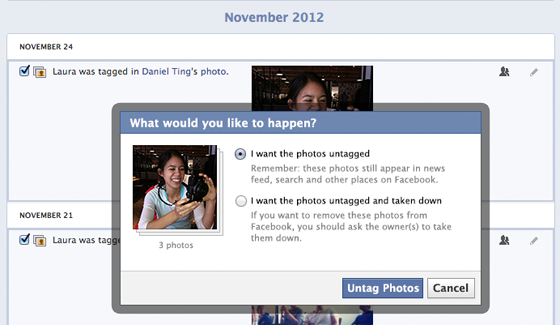