Google tweaked its SafeSearch filter today — a feature that allows users to prevent explicit content from appearing in search results — making it less likely for some queries to return pornographic content. The change left many users confused and upset earlier today after the company appeared to be blocking explicit images even for users who have SafeSearch turned off. The change to image search requires users to be more specific when requesting explicit content, and now presents them with a pop-up warning if Google detects that a user is searching for explicit content for the first time.

The difference in search results is apparent when comparing Google's new image search algorithm to other browsers, and also to some of Google's international sites (like Google's German image search site, for example), which have not been updated with the new search rules. The Verge performed several cross-search engine tests and discovered that Google's new results are, in fact, quite different; the following searches in the image below used the same query with filtering turned off. 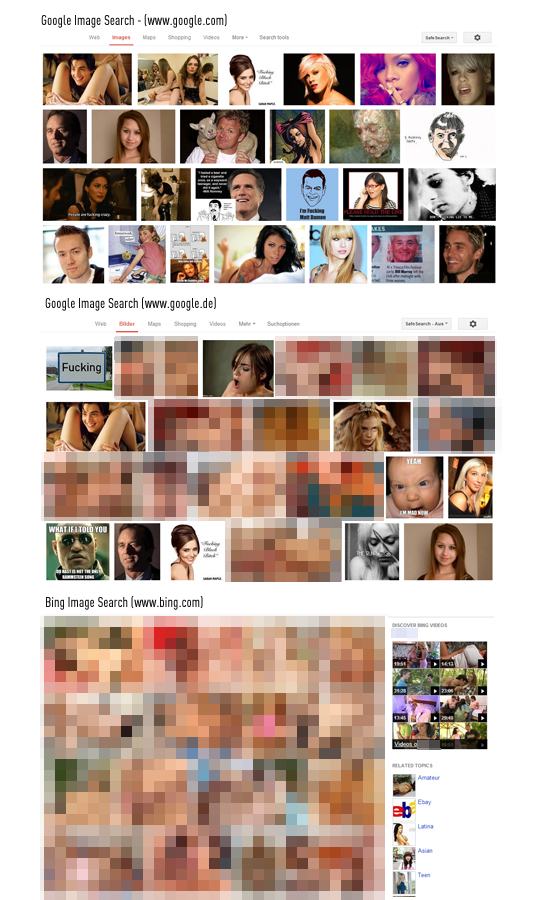 Previously, users could select from three levels of search filtration with a SafeSearch drop-down menu: "strict" filtering (no explicit content), "moderate" filtering (the default setting), or no filtering. Now, users are allowed simply to toggle SafeSearch on or off, and the setting is turned off by default.

Users upset about the change have expressed their concern on the web, and while Google may not be censoring search results, it's still forcing people to change their search behavior. It also adds seemingly unnecessary steps for those who may have already indicated their interest in explicit content by turning SafeSearch off. Of course, the change may be seen as a benefit for parents and others who would prefer not to stumble onto explicit images with broad search terms.

Update: In a statement given to The Verge, a Google spokesperson says that "we are not censoring any adult content, and want to show users exactly what they are looking for — but aim not to show sexually-explicit results unless a user is specifically searching for them." The full statement is below:

We are not censoring any adult content, and want to show users exactly what they are looking for -- but we aim not to show sexually-explicit results unless a user is specifically searching for them. We use algorithms to select the most relevant results for a given query. If you're looking for adult content, you can find it without having to change the default setting -- you just may need to be more explicit in your query if your search terms are potentially ambiguous. The image search settings now work the same way as in web search