'The Hobbit: An Unexpected Journey' is a middling return to Middle-earth

Share All sharing options for: 'The Hobbit: An Unexpected Journey' is a middling return to Middle-earth

A decade ago, Peter Jackson pulled off what many thought was impossible: adapting J.R.R. Tolkien's The Lord of the Rings into an epic big-screen trilogy. The movies debuted to critical and commercial acclaim, moving far beyond the boundaries of the fantasy genre, and earning 17 Oscars along the way. The filmmaker has now returned to Middle-earth with a new trilogy based upon The Hobbit. Buttressed by 3D and the somewhat controversial choice of high frame rate photography, An Unexpected Journey joins Bilbo Baggins 60 years before Frodo began his trip to Mordor — but the whimsical fun of Tolkien's novel is bogged down by the movie's excessive length and the conspicuous absence of many elements that made The Lord of the Rings such a pleasure to watch in the first place.

The plot, as it is, hews closely to the source material. Young Bilbo Baggins (Martin Freeman of Sherlock) is visited by Sir Ian McKellen's Gandalf, and before he knows what's happening 13 dwarves have landed in his living room. Led by Thorin Oakenshield (Richard Armitage, doing his best Rob Zombie impression), the dwarves hope to reclaim their kingdom from the dragon Smaug, and after a lengthy bit of exposition Bilbo decides to join them on their quest.

There's a surprising lack of charm

While the set-up may sound like familiar territory, there's a surprising lack of charm here. The Fellowship of the Ring took its time to introduce audiences to the Shire, the life of the Hobbits, and the world in general; it wooed viewers before making the leap to orcs, goblins, and the Eye of Sauron. Here Jackson jumps right into the action, and while this may be true to Tolkien's novel it doesn't quite work in the film. We never get a real sense of who Bilbo is — or why embarking on this journey is such an important choice for him — and beyond some flashbacks Thorin himself is a cipher. The great stakes of a world in crisis simply aren't present in Journey, and the random assortment of dwarves are no match for the compelling charisma of Aragorn in the first trilogy — to say nothing of his love story with Arwen. 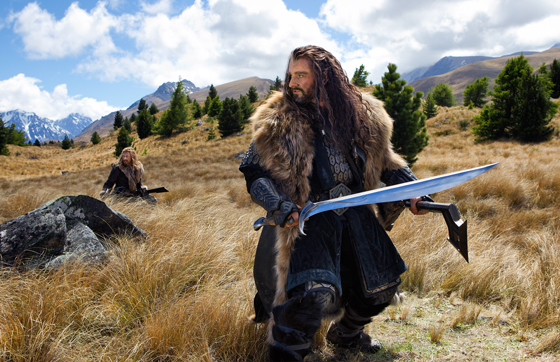 The attention to character — and the overarching themes of redemption, loss, and reaching beyond one's own abilities — are a major reason why the original Rings trilogy was so accessible to mass audiences. It's something that's sorely missing throughout Journey's nearly three-hour running time. At the end of the film we get a hint similar concepts may be addressed in its sequel, The Desolation of Smaug, but unfortunately the majority of the film plays like overinflated prologue.

It's a problem that not even the charm of McKellen's Gandalf can mask. The cast delivers strong performances across the board, but there's simply not much for them to work with. The problem's underscored when the film returns to the Elven outpost Rivendell. Suddenly surrounded by characters from the original trilogy — Galadriel, Elrond, and Saruman — we're reminded just how poorly the characters in Journey are rendered in comparison.

Remember the joke that 'LOTR' was people just walking for three hours?

The deficiency may simply be a matter of choosing to stretch a 300-page novel into a nine-hour epic. One thing Jackson and his writing team did so well in the original trilogy was choosing what to include and what to leave behind — Tom Bombadil, I'm looking at you — but here he incorporates countless elements from the 125 pages of appendices Tolkien included with the publication of The Lord of the Rings. The result is a film that feels like a real grind at times, filled with needless action sequences that rarely provide anything beyond an immediate adrenaline boost. It's a movie about things just happening to people instead of people taking action into their own hands. Remember the joke that The Fellowship of the Ring was just a bunch of people walking around for three hours? In this case, it's actually true.

Some of the best digital creatures ever created

That's not to say the film is without its pleasures. It's expertly done on a technical level, and the creature work in particular is astounding. From trolls to The Great Goblin, these are some of the most expressive and nuanced digital creatures ever created. Gollum — again played by Andy Serkis — delivers one of the most emotionally-charged performances in the film. Weta Digital has always shined when it comes to Gollum, but here the character's riddle-off with Bilbo is astounding, and yet another reminder that the effects company is one of the very best in the world. 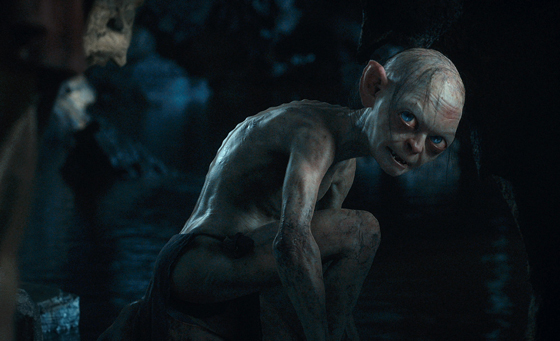 Of course, this brings us to the issue of the format. Since the advent of sound, almost all theatrical films have been shot and projected at a specific speed: 24 frames per second. For the new trilogy, Jackson opted to shoot at 48fps, with many theaters projecting it at the same rate under the High Frame Rate 3D (HFR 3D) brand. The director has said in interviews that the format provides a crisper, cleaner viewing experience with a greater sense of immediacy, and he's right.

The problem is due largely to what we already associate with the different frame rates. Until recently, video has always been shot at higher frame rates than film, bringing with it a very specific look. Think cable access shows or soap operas — and that's exactly what you see in The Hobbit. Rather than the majestic grandeur presented in the first films, the new entry looks more like a Renaissance Faire recreation shot on your brother's mini-DV camera. It's most jarring in the movie's opening, where we briefly visit Frodo and Bilbo in the moments leading up to Fellowship; we know what these characters in that world should look like, and it simply feels wrong. The mental association with video drops the perceived production value of the entire production, and with strange motion artifacts giving the impression of a sped-up silent film at times, it's hard to understand why Jackson thought this was the time to debut the technology.

More like watching a video game than a movie

To be fair, there are some advantages. The clarity is indeed stunning; I could count the pores on Martin Freeman's nose, and wide shots and battles are particularly vivid. Action sequences are unquestionably the high point of Journey, but even then it feels more like watching a video game than a movie. In the moments where HFR works, it's not a question of better or worse as much as it is different. In close shots or daylight sequences, however, I found it a real barrier to simply falling into the movie's world. Jackson claimed in April that it takes only 10 minutes to adjust to the new look. While 48fps certainly became less of a distraction as the movie wore on, its weaknesses never went away — yet another example of The Hobbit tampering with the winning elements of the original LOTR trilogy.

Should you go see it? With films of this caliber that question is almost moot. It's Peter Jackson and it's The Hobbit; of course you should see it. It's best to walk in with tempered expectations, however; this is more Transformers than The Two Towers. As for 48fps, it's a matter of whether you want to see the movie as the director intended with the latest innovation to hit the silver screen — for better or worse.

Personally, I'll be giving the movie a second chance in good old-fashioned 24fps to get as close as possible to the Middle-earth I know and love. Ten years from now, An Unexpected Journey may be seen as an important pivot point: the beginning of a movement where movies and video game sensibilities merged to create a new kind of amusement-park cinema. For a story of romantic adventure and whimsical fun, however, we'll have to see what The Desolation of Smaug has in store when it hits theaters next year.

Update: To get a sense of how much 48fps projection impacts the viewing experience of An Unexpected Journey, I watched the film a second time projected in 2D at 24fps. I was happy to find that the difference was obvious — and to my eyes, a marked improvement. Presented traditionally, the film looks just like any other movie you're accustomed to seeing, with no trace of that jarring video look. In comparison, there's no denying that the HFR version does improve upon the slight visual "stutter" one can sometimes detect in movies during a tracking shot. Sacrificing the entire feel of a film, however, seems far too large a price to pay for such a trivial improvement. I'm excited to see how Jackson and his team can improve HFR for their second go-round next year, but when it comes to initial impressions, I'll be trying to see Smaug at 24fps first.

Sam Thonis contributed to this review.