Rise of the giant robots: how one Japanese cartoon spawned a genre

It’s hard to think of a more quintessentially Japanese contribution to animation and science fiction than the giant robot. For the millions of kids that grew up outside Japan in the 80s and 90s, shows like Voltron, Robotech, and later Gundam Wing were an introduction to a whole new style of cartoon. Sure, they dealt with a lot of the same themes as Transformers, but underneath there was some darker, more serious storytelling going on. What you might not realize is that if you follow the giant robot timeline back, a lot of the elements that we associate with the genre can be traced to a single comic — Go Nagai’s Mazinger Z. By the time the series debuted in 1972, readers had already been dazzled by incredible robots like the remote-controlled Gigantor (Tetsujin 28) and especially the sentient Astroboy (Tetsu-Wan Atom). But those robots’ strength was always just out of the reader’s grasp. Mazinger Z was the first series to put a teenaged protagonist inside the cockpit of a giant robot, and Toei’s 1973 animated series became a huge hit domestically, both in terms of ratings and in merchandising revenue. Right now, the Osamu Tezuka Memorial Museum in Hyogo, Japan is hosting an exhibit of Nagai’s work, and it shows both how different Mazinger Z was from anything that came before it, and how much it impacted everything that's come since. 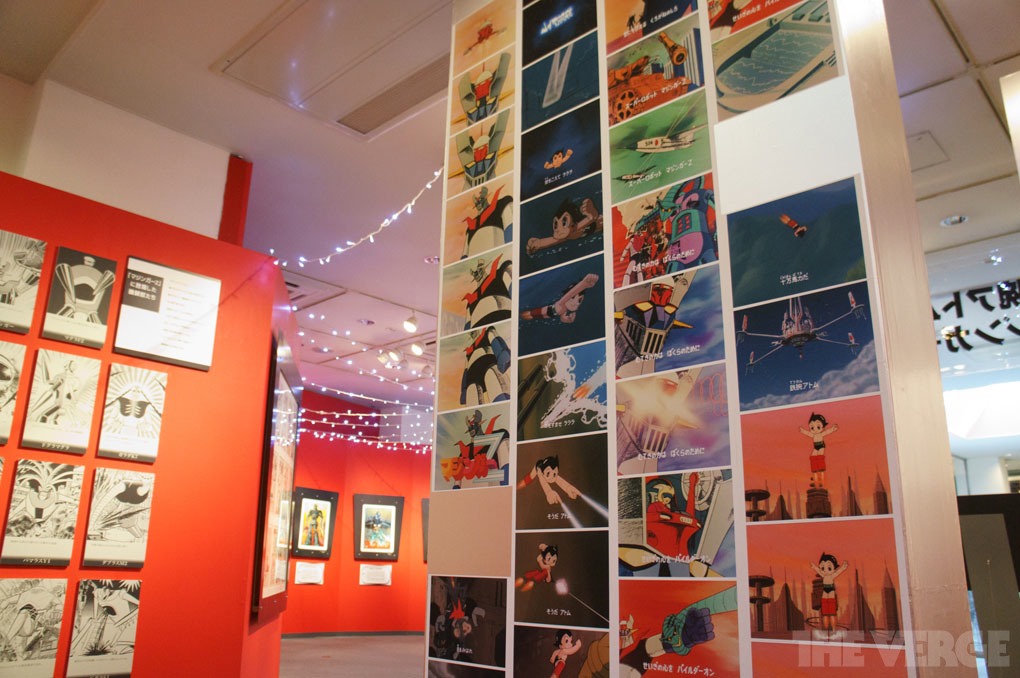 Like many of the country’s biggest manga properties, Mazinger Z first hit newsstands in Shonen Jump, a weekly comic anthology that was also the starting point for everything from Kinniku Man to Naruto. The series followed the adventures of Kouji Kabuto, the hot-headed, motorcycle-riding 16 year-old and pilot of the series’ namesake super robot. Mazinger Z is forged out of Super Alloy Z (whose critical component, Japanium, can only be found at the base of Mt. Fuji) by Kouji’s grandfather, Juuzou. The story more or less revolves around Kouji fighting off the evil Dr. Hell’s weekly mechanical beasts — ancient robot monsters from a pre-Grecian civilization. So far so good.

But there are a host of peculiarities to Mazinger Z that have fallen by the wayside over the past 40 years. The art style is round and cartoonish; very different from the more industrial designs found in Gundam or Macross. Kouji pilots Mazinger Z from the cockpit of his “hover pilder” — a small hovercraft — which explains the distinctive, crown-shaped opening in the robot’s head. And while the show took a big step forward for robot gender equality by prominently featuring not one but two female robots in major supporting roles, they had to endure that most humiliating indignity — the oppai or “boob” missiles. Oddly, when the show had a brief run in the US as Tranzor Z, sequences featuring that particular weapon — a mainstay in the original — were hastily cut out. 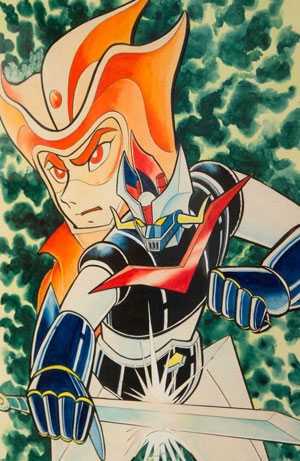 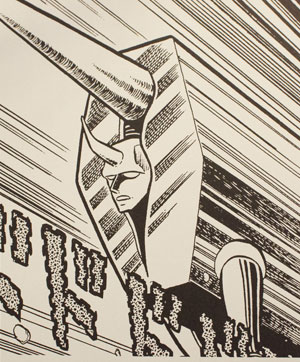 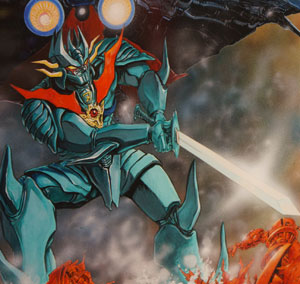 Perhaps the hardest thing for American audiences to swallow, though, was the rampant death in the show. In the first episode alone, Kouji’s mother and grandfather are both killed in front of the viewer at the hand of Baron Ashura — Dr. Hell’s half-man half-woman second in command. And that’s only after Dr. Hell discovers the mechanical beasts on the island of Bardos and decides to burn the rest of his research team alive, in graphic, screaming detail. This idea of showing real death in kids’ cartoons may have been par for the course in Japan (while it didn’t appear until 1979, Mobile Suit Gundam is particularly notable for its realistic depiction of war), but it isn’t hard to imagine the American censors’ faces as they watched the animated carnage unfold. Despite this, Nagai’s creations became a hit in Europe and South America. A statue of the titular robot was erected in Spain, and a 1978 French take on the theme to UFO Robo Grendizer — a follow up to Mazinger Z — was a huge hit in that country, selling over 1.3 million copies.

Nagai reportedly got his idea for piloting a robot from watching frustrated drivers in a traffic jam, imagining a car that could sprout arms and legs and walk over the other vehicles. “What I had in common with the children that were seeing robots was that I wanted to have this incredible power,” he told Web R25 in 2009. “I didn’t equate giant robots with weapons, I wanted to give a teenaged character a suit of armor that would turn him into a hero,” he added. 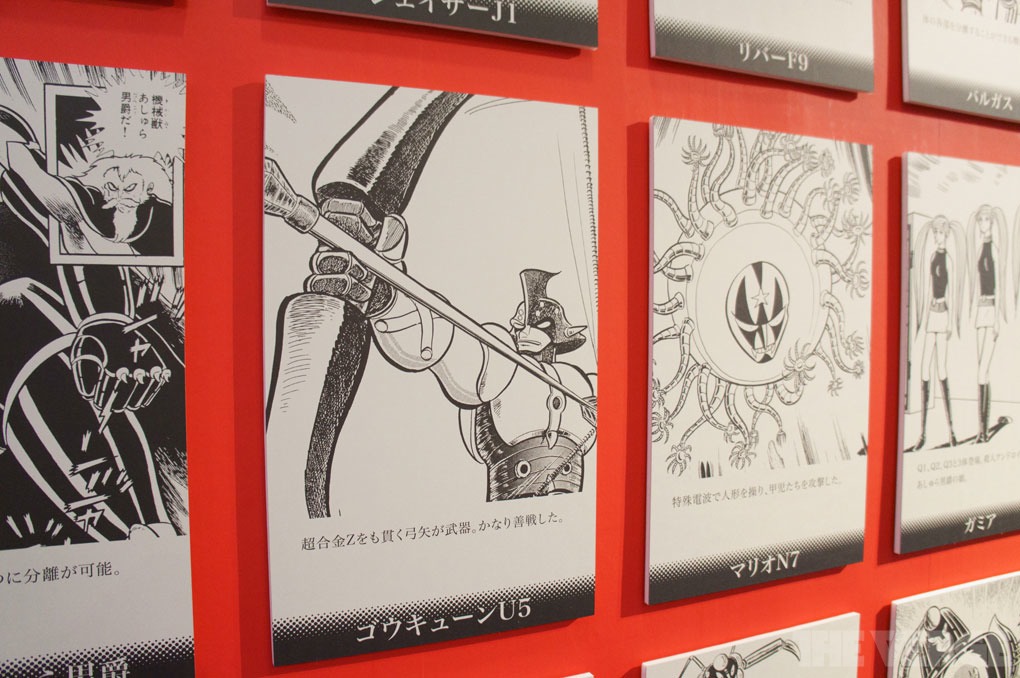 But even though the artist ended up making groundbreaking contributions to manga and anime, his career path was as peculiar as the worlds he created. After the success of Mazinger Z, it was hard to imagine controlling your giant robot from anywhere but inside the machine. The idea of multiple vehicles interlocking and combining propelled the lions of Voltron (Beast King Go Lion) to massive success in North America, but that too got its start in Mazinger Z before getting developed in Getter Robo, another anime series that Nagai helped create for Toei. Same with the series’ voice commands like “pilder on!” and “missile fire!” But in an interview for the Japanese government’s now-defunct Media Arts Plaza, Nagai revealed that his decision to drop academics for manga was less a lifelong ambition than the result of a cruel prank.

When his older brother found out the younger Nagai was having a prolonged bout with diarrhea, he told him that it must be colon cancer (“a guy I know just died from that”), which the younger brother naively believed. Even though he saw a doctor right away, he had to wait days for the results, during which time his “view of the world completely changed.” The artist explained, “I would feel like I was isolated from the outside world in this kind of clear balloon… this isn’t a figure of speech — I could really see the balloon. When I was overcome with this intense loneliness, I just thought, rather than get rich, or have a beautiful wife, I wanted to leave some kind of proof that I had lived. Like a scratch on the wall — ‘I was here.’” He decided that artifact would be manga. When the tests came back negative, Nagai had already plotted his life’s course. 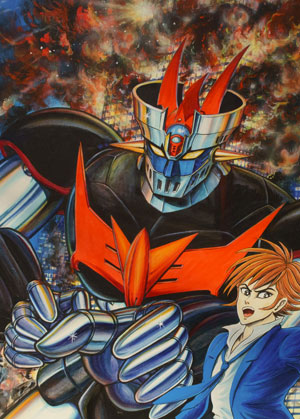 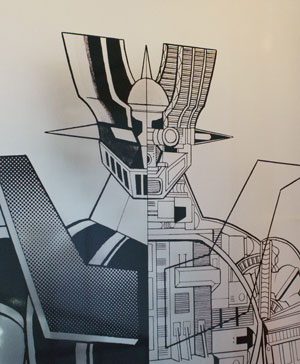 Over the past 40 years, the author’s works have grown and multiplied. Mazinger Z was the jumping-off point for a raft of related material, including Great Mazinger, Z Mazinger, UFO Robo Grendizer, Getter Robo, Psycho Armor Govarian, and God Mazinger. Later, other series like Mobile Suit Gundam and Neon Genesis Evangelion were able to refine the giant robot formula by making their robots more realistic; having a limited supply of ammunition, and needing onscreen repairs after tough battles. In contrast, realism was never high on Nagai’s list of priorities. He tried to make his characters as outlandish as possible, and shunned writing long story arcs in advance, preferring to make things up as he went along. “Nowadays, the trend is for the characters to have complex personal relationships, but I think things should feel straighter. That’s why my robots are more fun than what they have now,” said Nagai in an interview with the Sankei Shinbun. It was never Nagai’s intention to teach the youth, just to give them the feeling of being big and powerful. “Kids want to turn into adults fast,” said Nagai. “I just wanted to take that feeling and turn it into a human riding inside a robot.” 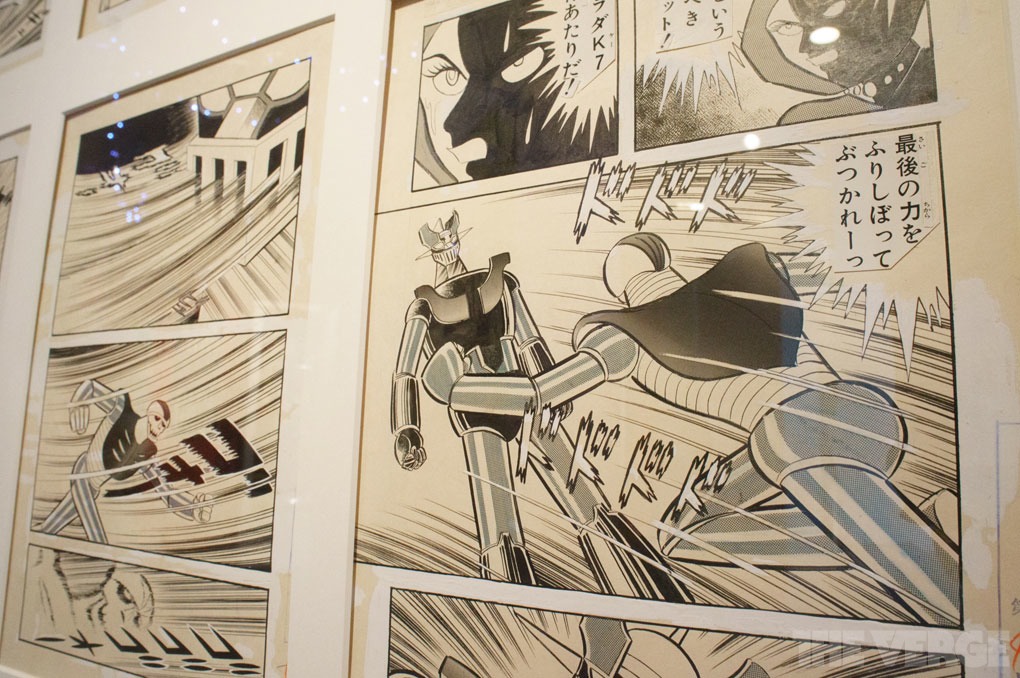