But will a late 2013 launch kill its chances?

Innovation comes from the most unlikely of places. Russian cellular modem specialist Yota Devices — a spinoff from Russian carrier Yota — has revealed its plans to bring a dual-screen Android smartphone, codenamed the YotaPhone, to the international market next year. Unlike the unwieldy (and unsuccessful) Kyocera Echo, which featured dual screens separated by a hinge, Yota has placed a display on either side of a traditional "slab" smartphone design. That's not the hook though. The YotaPhone's claim to fame — and the reason why The Wall Street Journal announced yesterday that "the Russians are coming" — is that its rear display isn't an LCD or an AMOLED display, but an always-on E Ink unit like that found in Amazon's Kindle e-readers. For a Russian company to be producing a smartphone of international interest is unprecedented, so we met up with Yota Devices CEO Vladislav Martynov today to take a closer look.

Aside from its unique E Ink display, the YotaPhone is a pretty standard smartphone; you'll find everything you expect, including a dual-core Snapdragon S4 processor, 2GB of RAM, a 720p 4.3-inch display, 12-megapixel camera, stock Android 4.2 Jelly Bean, a 2,100mAh battery, LTE, and NFC. So why E Ink? Yota CEO Vladislav Martynov claims that always-connected phones have "changed our behavior not in a nice way, not in the way it should be." He says smartphone users are inundated with notifications that require them to pick up their device and interact with it; there's just not enough glanceable information.

Rather than simply mirroring, the second display is used intelligently

Rather than simply mirroring the main display, the YotaPhone's E Ink display is used for specific applications. "It was important to us from the beginning that this is a different screen," says Martynov. "You have your normal Android screen on the other side to do the things you normally do, this one is your personal screen where you define exactly what you want there." Think of it as a companion screen — dependent on your preferences, it's able to extend the main display in a number of interesting ways, including pulling in notifications, showing your Twitter stream, displaying appointments, or any image. There are obvious benefits to E Ink — it's certainly easier on the eye, and with the always-on nature of the display, notifications are just a glance away. The implications for battery life are huge, as E Ink only consumes battery life when it refreshes and is far more efficient than LCDs or AMOLED displays. Yota is planning on releasing an SDK for apps to fully support its second screen, but is quick to point out that you can mirror any image with a simple gesture. Giving the example of a boarding pass, Martynov pointed out that you could push your pass to the E Ink display and then switch your phone off to board the plane — the boarding pass will stay on the display until you put something else there.

Yota has been working on the technology in partnership with E Ink for two years and is just now producing its first "working" prototypes. I say "working" because a firmware issue meant we were unable to see the device working for ourselves, although we were given an extensive demonstration via Skype from the software development team in Russia. The phone is pretty large; it's almost exactly the same width and thickness as Nokia's chunky Lumia 820, but doesn't hide its heft as well. It's also pretty tall, thanks largely to a gesture area beneath both of its displays. The gesture area takes the place of the regular Android buttons, and seems designed to confuse — the Home, Multitask, and Back keys are remapped to a pair of gestures and a long press. The area makes more sense on the E Ink side of the phone, where it's used to swipe back and forward between content like ebook pages. 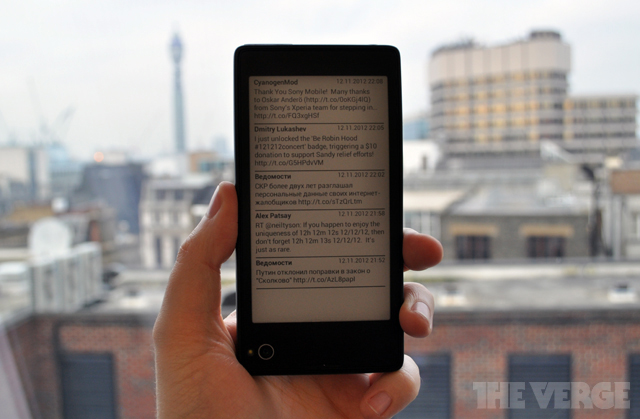 Scheduled for a Q4 release, and a year is a long time in tech

So where does Yota go from here? The company says it's in talks with carriers worldwide, but wouldn't reveal any specifics. It's aiming to release the phone in June / July next year in its native Russia, but an international launch isn't likely until Q4. While the YotaPhone probably won’t be beaten to market by another phone quite like it, the fact remains that a year is a long time in tech. E Ink is clearly interested in the smartphone space in general — it showed off a prototype iPhone case utilizing its tech back in October — and Yota may not have the market to itself for too long. Martynov told us that it will ship with the latest version of Android available, but its processor is currently the mid-range standard, and will likely be showing its age this time next year. There's also the question of market viability: how is a relatively unknown Russian company going to persuade carriers to sell, and users to buy this oddity? Is there an actual desire for phones that are truly different? Martynov assures us the answer to both is "yes." The YotaPhone will be officially named and revealed at MWC in Barcelona this February, and should go on sale for around $500 internationally in Q4 2013.