RIM already revealed back in November that it would be officially unveiling its BlackBerry 10 platform on January 30th of next year, and now the company has sent out media invites to an event in New York City for the official launch. RIM has not said specifically what it will announce with regards to devices, but the company has promised to announce both full-touch and QWERTY-equipped devices in the early part of next year. BlackBerry 10 represents a seismic shift in RIM's smartphone strategy, and is a completely new platform that replaces the BlackBerry OS as we know it.

In addition to the new launch news, RIM has also been seeding versions of the BlackBerry 10 software to its top enterprise and government customers to make sure that they are able to use the new platform and its related services when they are officially launched. Enterprise and government contracts are probably more important to RIM than any other company in the mobile space, so it's not a huge surprise that the company is making sure those customers are happy with the new platform first. 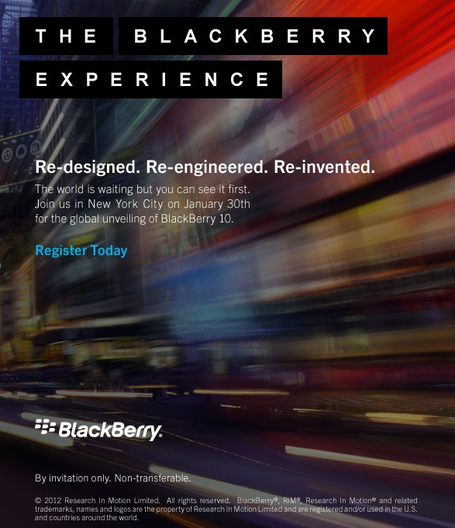