As BlackBerry 10's official debut draws closer, newly-leaked screenshots of the operating system are offering a preview of what we can expect from RIM's next milestone release. Posted on Tihnte and republished on BGR, the images showcase user interface design across various BB10 applications. Most interestingly, we see what appears to be a voice dictation app — with an animation not unlike Apple's Siri assistant. It also resembles Windows Phone 8's flat UI styling. Support for voice commands appeared in early preview builds of BlackBerry 10 over the summer, and while the screenshots suggest you'll be able to dictate messages and calendar appointments, little else about the functionality is known. 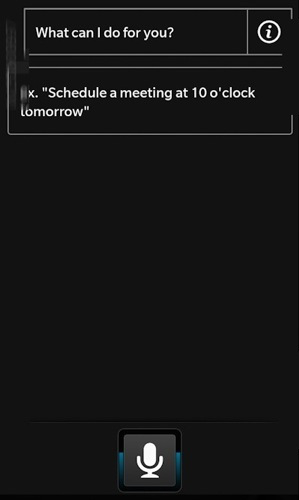 Twitter for BB10 is also revealed in the screenshots, though like the Facebook app we've seen previously, it (predictably) adheres closely to the design language already seen on iOS and Android. Further, the leaked images provide another look at BlackBerry Hub, which combines various messaging platforms into a uniform experience which RIM promises will let users quickly communicate with friends and family. The transparent layers and other visual flair RIM has brought to BB10 may not appeal to everyone, but it's nice to see the company putting a modern coat of paint on the OS that could very well determine its fate.