Building a great to-do list app is hard — we want them to be easy to use but impossibly powerful, with every feature imaginable but no friction or clutter. Wunderlist, the product of Berlin-based 6Wunderkinder, found a sizable audience thanks to both simplicity and ubiquity – from desktops to mobile, there's basically no platform with which you can't use Wunderlist, and it's incredibly easy to use. But with the brand-new version 2.0 of Wunderlist, 6Wunderkinder is trying to create an app that's both simple and powerful, and after a week or so using it I'm surprised at how well the company pulled it off.

The most noticeable difference in Wunderlist 2.0 is the look and feel of the app itself. It's simpler and cleaner on every platform, not to mention more consistent; there's a big column view and a sidebar, which you access on mobile by swiping from the left edge and on the desktop through a key command. Options that were previously too-easily available (like the background color) are now hidden in the settings menu, and a number of the sorting mechanisms – Today, This Week, and the like — have been made into Smart Lists. Smart Lists are a much more intelligent way of sorting tasks, and they blend in much more easily with the rest of Wunderlist's structure.

It's much faster, and much better-looking – though that's not high praise

It's also much faster in every case — the app was previously built on Titanium, which lets you build one app and use it everywhere, but it's now native on each platform. The difference is huge, both in syncing speed (there's also a new syncing engine, which works well) and in general smoothness and reliability.

I've never been a fan of the default fake-wood-panel background, or any of the other options either for that matter. I'd much rather pick my own background or just use a solid color, but Wunderlist doesn't offer either option — I picked a textured blue, which seemed like the least of evils. Wunderlist has never been a particularly attractive app, and though the look has certainly been streamlined with the latest version, it's still not much to look at. 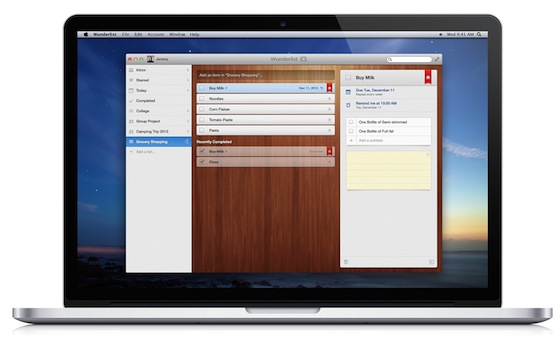 The app's basic paradigm hasn't really changed either, and you're still mostly managing lists of tasks. But the tasks themselves are far more powerful: you can finally add recurring tasks (a must for people like me, who wouldn't remember to pay bills without a nagging reminder every month), and add subtasks if there's more than one aspect to something you have to do. You can also get reminders in your email when a task is due, which might be useful to some people but for me is just more inbox clutter. Adding notes to tasks is easy, as is sharing tasks with other Wunderlist users — it's a pretty great tool for families or co-workers, actually. You can't filter by anything other than list or date, which is frustrating to me as a perpetual tagger and sorter, but for most people there's plenty of organization.

It can be simple or complex, depending on how you want to use it

There are still a few frustrating pieces of the app, though. Wunderlist shows your "Recently Completed" tasks, but its definition of recent seems to be any task you've completed, ever, so my lists look perpetually cluttered even when there's not much I have to do right now. Adding tasks is still somewhat clunky — you have to add the task, hit enter, then select the task and add a due date or a note, whereas something like Remember the Milk gives you handy symbols and syntax to add all the information at once. It is easy to add a bunch of tasks at once, though — just tap or click in the entry field, and keep typing and hitting enter every time you want to create a new task.

Wunderlist 2.0 is available now for iPhone, Mac, Android, Windows, and the web, with other platforms presumably coming soon. It's certainly the first task management system I'd recommend to most people — it's free, it's everywhere, and it's considerably more capable than before even if it can't match the power of Things or Omnifocus. Unless you need something endlessly customizable or can't bear to look at Wunderlist's interface (and I wouldn't blame you in either case), Wunderlist is a great way to stop messing with pen and paper, or a million different apps, and finally get your to-do list in order.