The social network's database is valuable, warts and all

Apple needs good location data, and fast, in order to repair the damage from its botched Maps service. So it wasn’t surprising to read reports that the iPhone maker is considering a partnership with location-based social network Foursquare, which happens to be sitting on a homegrown database of 50 million venues in 220 countries.

Foursquare initially gained notoriety as a service for ostentatious oversharers eager to broadcast their fun-packed Saturday nights. However, the service has been building a sophisticated venue database from scratch that could go a long way toward filling in the gaps in Apple’s incomplete, error-riddled Maps product.

The vast majority of Foursquare’s venue data is based on actual GPS coordinates collected when users check in at a venue using their phones. That means Foursquare’s geographical accuracy gives it at least one big advantage over Yelp, which relies on data from third party providers and is already integrated into Apple’s Maps.

In fact, Foursquare’s data is sourced almost entirely from check-ins and tips submitted by users, with precious few exceptions (Fandango for movie times, Google for polling place data). Foursquare has more than 25 million users and a highly active group of "superusers" who have the ability to edit venue information. Google Maps actually has a similar system with citizen moderators.

There are advantages to relying on users rather than, say, employees walking around with cameras mounted on their backs. For one thing, it's much cheaper. Also, Foursquare users have added unconventional venues like mobile food trucks, gas stations, dry cleaners, even apartments and college classrooms — stuff that is useful in searches but is often left out of other directories. New venues often hit Foursquare first, and its users are equally quick to flag duplicates, closed venues, and incorrect addresses.

There are also disadvantages to relying on user-submitted data, too, such as spotty or inconsistent coverage in smaller towns and a lack of uniformity in the way listings are described. 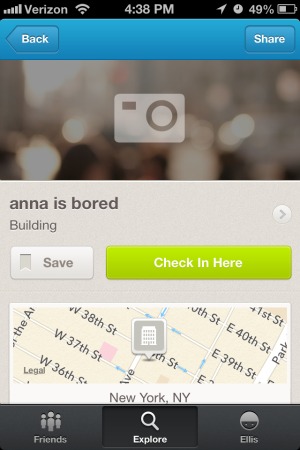 However, the biggest potential obstacle to an Apple-Foursquare marriage is more amusing: joke venues. Scan the list of nearby venues in almost any neighborhood in New York and you’ll see venues with names like "Driving in circles looking for parking" and "I would kill for your apartment."

Foursquare doesn’t take these jokes too seriously. "Places are legitimate if people like to check in there and the place is not negatively affecting others’ Foursquare experience," according to the superuser guidelines. These little gags are part of what makes Foursquare fun, but it can also be annoying to sift through a list of bogus results while attempting to check in. That kind of humor may not fly as Apple attempts to field a serious Maps service.

A partnership between the two companies "would be a huge win for Foursquare in terms of recognition and validation of their enormous data set. Also big for Apple because it would lend some credibility to Maps when they need it," said Chris Thompson, a superuser who writes the AboutFoursquare blog. Licensing its location data to Apple could also be a major new revenue stream for the startup, which has not fully monetized yet.

Foursquare’s recommendations and venue ratings could also add to the Apple Maps experience. Google Maps now integrates ratings from Zagat, the reviews service acquired by Google in 2011. Foursquare could provide the same functionality in Apple’s maps -- imagine asking Siri to recommend a good bar nearby. While it’s probably looking narrowly at venue information, Apple could also potentially integrate Foursquare data deeper into a number of its other apps, including Calendar, Reminders, and iPhoto.

Imagine asking Siri to recommend a good bar nearby

About 20,000 companies and app developers have found handy uses for Foursquare’s data, which is accessible through Foursquare’s generous application programming interface (API). For example, Instagram uses Foursquare’s "reverse geocode" feature to suggest a location for a picture, OpenTable now accepts reservations from Foursquare, and Tasti D-Lite lets customers check in on Foursquare when they swipe their loyalty cards to pay. The GPS navigation service Waze, also an Apple Maps partner, uses Foursquare’s platform for search.

Foursquare is still primarily a social network, but the company has been putting an increasing emphasis on venues, recommendations, and local search. Each of those efforts has about five dedicated staffers. "Foursquare is the best source for location out there," said Andrew Hogue, who heads up Foursquare’s search team. "We want to power geo in every app out there, just like we do for Instagram and Uber."

Foursquare declined to comment on rumors of an Apple partnership.