In a win for interface efficiency, Facebook’s publisher box is going to start letting users upload multiple photos at once by dragging and dropping. As reported by Inside Facebook, The change will make it a lot easier to create photo albums — previously, you had to navigate to the photos tab, click on Albums, and then select New Album. Right now, posting a single photo takes a minimum of six clicks and requires you to navigate your computer’s file system, so the updated UI is bound to be popular among heavy users. So far, we haven’t spotted the changes on our own profiles, but Inside Facebook reports that the new UI will be also be available for the Timeline cover photo and messages when it rolls out in the near future.

The social network is also toying with streamlining its UI in another way, reports ABC News — putting About, Friends, and Photos on the same page, and getting rid of the associated thumbnails on the Timeline page. The result is a single document containing the aforementioned; users can click once to move to "About-Friends-Photos" and scroll through all of it in a single pass, rather than jump around between multiple pages. Timeline posts have been simplified in a similar way (image below) — instead of alternating between the left and right sides of the screen, the new design puts all Timeline posts back into a single chronological stream, with posts on the left and photos on the right. But unlike the drag-and-drop photo interface mentioned above, Facebook says it's only testing the new Timeline design out with a small percentage of people for now. 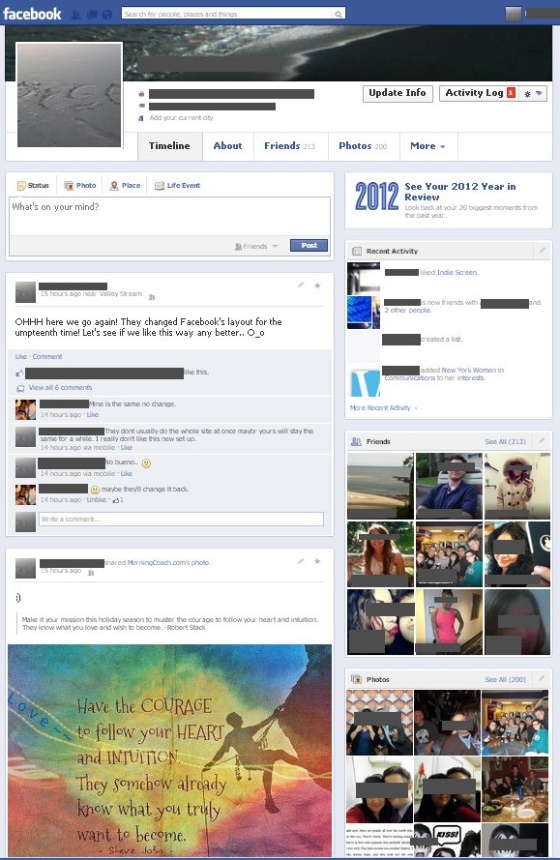