Today Facebook made some waves by releasing Poke, an app that allows users to send messages that disappear after a short period of time. It's clearly aimed directly at Snapchat, an app the provides the exact same functionality. Snapchat co-founder and CEO Evan Spiegel appears to be taking the competition in stride, however, providing us with a simple statement in response: "Welcome, Facebook. Seriously."

If that phrasing sounds familiar, it should: it's the exact same headline Apple used in a full-page Wall Street Journal ad in 1981. That particular advertisement was used to "welcome" the IBM Personal Computer to the market. The IBM PC was discontinued less than six years later — but whether Snapchat will prove to have Apple's staying power still remains to be seen. 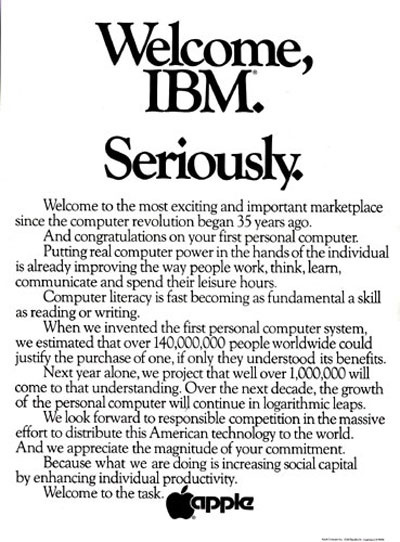