Link to the past: making Nintendo Power’s final cover

A fitting farewell crafted with clay

Share All sharing options for: Link to the past: making Nintendo Power’s final cover

Nintendo Power published its final issue this month, after a lengthy, 285-issue run that began back in 1988. And the 96 pages contain plenty of emotional moments for longtime readers. You'll find everything from a heartfelt comic strip about letting go to warm memories from Nintendo Power staff past and present. What will really tug on your heartstrings, though, is the cover — a modern remake of the magazine's iconic first issue, featuring a clay sculpture of Mario. Created by artist Leslie Levings, the new cover is a fitting tribute to an important piece of gaming history, and one that has managed to touch plenty of Nintendo fans. "This might be the first time my art has ever bummed out so many people," Levings wrote on her blog.

The magazine wanted something that paid homage to the first issue, and Levings was introduced to the project by Bill Mudron, the artist behind the touching Nester and Max comic that graces the final few pages of the issue. The two had worked together in the past, and when Nintendo Power was looking for a sculptor to tackle the cover, he gave her a recommendation. Levings didn't have a subscription to the magazine growing up — or even an NES for that matter — due to her mom's "no console policy." But that didn't stop her from being a fan of both Nintendo and Nintendo Power, thanks largely to her ability to sneak in gaming and magazine time at her friends' houses. "Those were the best friends to visit," she says. Discussions on the cover first began in August, but figuring out the design took some time, with a number of sketches sent back and forth to nail down the details. She didn't actually begin sculpting the scene until October.

"It has to be exactly right or it's not Mario!"

The basic structure of the two covers is the same — a jumping Mario in the foreground, with a sinister villain right behind him — but many of the details have been changed. "They basically just told me that they wanted to reference that cover," says Levings, "but do it in a more modern way." Mario has a new look more reminiscent of recent games, and instead of jumping over a field of vegetables he's stomping on a hapless goomba. He's also done away with the carrot in his hand (vegetables were only present in 1988's Super Mario Bros. 2). Levings says that sticking to the original framework was "really fun," but it also came with quite a bit of pressure. "It was also a little terrifying because of how significant that original cover is. I didn't want to be the person who screwed that up." And the iconic nature of the character only added to that stress. 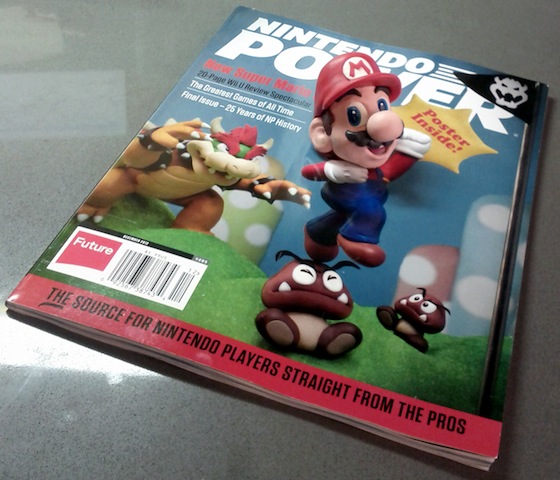 "Everyone knows how he's supposed to look," says Levings. "It has to be exactly right or it's not Mario! If his nose isn't the right size, or his cap is weird, everyone on the planet will be able to look at him and know it's wrong instantly. I was worried about that, and I definitely redid some parts several times before they felt okay."

Many of the changes simply have to do with the time period — while the cover story for the most recent issue was New Super Mario Bros. U, the first issue featured Super Mario Bros. 2. The biggest difference between the two is probably the villain lurking in the background. Bowser can be seen menacingly eying Mario in the new cover, while the original included the frog king Wart, an oft-forgotten part of the Mario universe. This change added its own set of challenges since "Bowser has a lot going on, design-wise." There was also one addition to the new cover, and it was something that Levings came up with herself — the flagpole on the right edge of the page, a tribute to the landmark found at the end of many Super Mario levels over the years. "I'm pretty pleased with that," she says.

"It was so nice to be able to do something that brought them back to that time in their lives."

Given just how important Nintendo Power was to a generation of young gamers, Levings says that she wasn't necessarily surprised at the emotional response the cover has received. But what she didn't expect was just how big that response would be. In a farewell letter, Nintendo Power editor-in-chief Steve Thomason called it "pretty much my favorite thing of all time," and the image was covered by gaming sites across the internet. "The outpouring of people saying nice things, or even saying that it made them cry, was more than I was expecting," she says. "It was so nice to be able to do something that brought them back to that time in their lives."

The final issue of Nintendo Power is on newsstands now.