You'll shoot your eye out: on Christmas, Americans flaunt their new firearms online

You'll shoot your eye out: on Christmas, Americans flaunt their new firearms online

The debate over gun control and gun culture has gripped the nation following a series of high-profile shootings this year, leading some groups to momentarily step out of the spotlight. In the meantime, scores of firearm owners took to Twitter and Instagram on Christmas day to show off their new lethal hardware.

Well, my 10 year old cousin got brass knuckles and an AR-15 for Christmas...pretty jealous actually.

I got just what I wanted. An Armalite semi-automatic AR-15 rifle. It's like the Christmas Story, but I'll shoot more than my eye out.

Semi-automatic AR-15 rifles are used for a variety of purposes, including hunting and home defense — but they're also the same type of weapon that was used in the Sandy Hook shootings and a recent ambush in New York that killed two firefighters. (Of course, there are many AR-15 rifle variants and they're a popular choice in the United States, often depicted in media and popular culture; the US military's standard-issue rifle, the M16, is nearly identical to AR-15 type weapons in external appearance.) They're also not the only weapons that Americans unwrapped on Christmas morning.

someone got a "glock" ;) instagr.am/p/Tq8ybZCzje/

While America's fascination with guns didn't just spring up this year, some people sharing their gifts online included a political agenda. As in the past, fears of gun bans or restrictions seem to have caused an uptick in purchases; reports from several local and regional news outlets in recent days suggest there's been a boost in firearm and ammunition sales, presumably built on fear of new gun control policies. As one gun store owner told The Baltimore Sun, "our numbers are too high to give you a quote. Obama and [Maryland governor] O'Malley have become our best customers, politically."

Aw what a nice #assultRifle #santa left me haha (plus a box of 1200 bullets) instagr.am/p/TqlInVzdwv/ 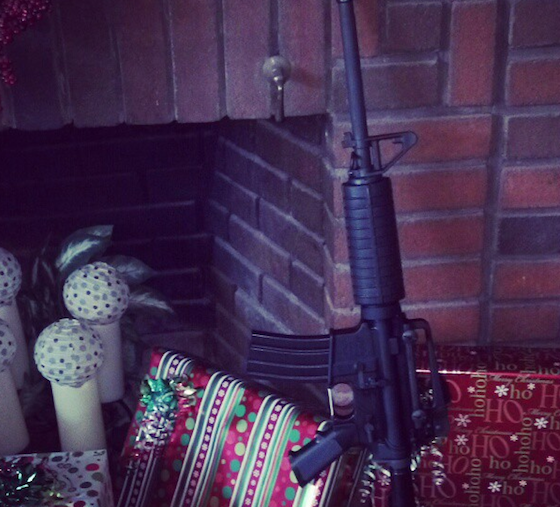 That sales boost appears to have manifested under the Christmas tree this morning, as people across the country woke up to new shotguns, rifles, and handguns — and then shared pictures of them on Twitter. The glee exhibited over gun gifts is a striking contrast to the outpouring of sympathy, horror, and anti-gun activism shared on social networks in recent weeks following the mass shooting at an elementary school in Connecticut, and a sign that the country could have a long road ahead in resolving one of its most deeply divisive culture wars.