Designing race cars of the future in ‘Distance’

In 2011 a group of students at the DigiPen Institute of Technology released an experimental racing game called Nitronic Rush, which went on to win a number of awards. After a successful Kickstarter campaign, the team at Refract Studios — made up of a number of students from the original project — are now hard at work on the spiritual successor, Distance. It will feature many of the same elements that made Nitronic Rush so popular, including fast paced arcade-style racing and a neon-lit sci-fi world to explore. But it also includes a much darker tone and vehicles that are more grounded in reality, despite their futuristic appearances. “We wanted the vehicles in Distance to seem quite a bit more realistic, like something you could almost imagine on a real road,” says Refract's Jordan Hemenway. “So there’s a lot more detail being put into each area of the vehicle.”

The fact that the team has already made a game in the genre means that they’ve learned some of the dos and don’ts when it comes to designing these vehicles. Hemenway says that the biggest thing Nitronic Rush taught them was the importance of balancing the size and speed of the cars with the world around them. “It basically looked like a Hot Wheels car moving through a huge world at insane speeds and you could barely keep track of it,” he says of watching zoomed-out replays in the first game. To fix this, the world and the vehicles are being designed to complement one another, so that they feel like they’re part of the same universe. “We want the vehicles to look like they were designed by similar architects behind the world design, so going forward that synchronization between the two is something we’re really aiming to nail.”

Distance is described as a "survival racing game," and unlike most titles in the genre, the world actually plays a big part in the fiction. The developers say you’ll learn more about the desolate city and why you’re there as you race. But while much of the setting remains a mystery, it’s most definitely set in a futuristic world, and the cars reflect this. They include sleek designs with features like rockets so that they can jump and even fly. The rear window of each vehicle doubles as a display, showing important information like your speed and pole position. It’s a clever way to avoid cluttering up the screen, but the window isn’t the only part of the car with this functionality — everything from the headlights and brake lights to even the tires can display information, which should go a long way towards letting players customize their rides however they want.

A flying car covered in LCD screens sounds kind of crazy, and making it feel plausible is one of the team’s tougher challenges. "The abilities of the car are definitely our biggest constraints," says Hemenway. "If you don’t try to explain how these pieces work it really stands out in a bad way, and when you do it properly very few people will notice because it now seems correct." It’s also important to get some of the more basic features of any car down in order to seem more realistic. When you’re driving a vehicle in Distance you should be able to tell whether it’s front-wheel drive, for instance, or how those crazy looking doors open and close. 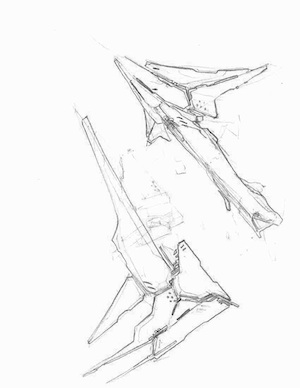 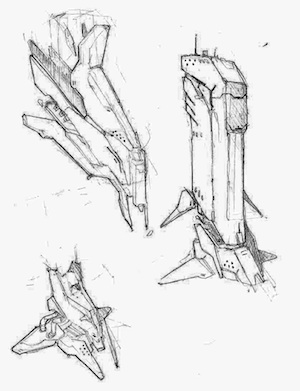 Then again, the sci-fi setting does give the team room to experiment and some leeway when it comes to realism. Jets that can make your car rotate in the air sound pretty out there, but as long as the car looks and feels right within the context of the game, it works. "You’re only limited by your imagination since our only true constraint is making sure that our vehicles are actually fun to drive and the controls feel solid."

Jason Nollan is the person responsible for designing all of the cars in both Distance and Nitronic Rush. He’s so into building car models that he once created a replica of his family’s minivan in Carmageddon 2. When it comes to designing vehicles from scratch for Distance, surprisingly there isn’t much in the way of concept art to define what they’ll look like beforehand — it starts with a few sketches, and then Nollan gets straight to modelling the cars. That model is then tweaked and changed based on feedback from the rest of the staff, and it can take a few weeks before the design is ready to be tested. Once the testing gets underway, the car is iterated on even further until everything looks just right in motion. "Vehicle creation is easily the most time-consuming art content," says Hemenway, "since it’s so dependent on getting the abilities to work properly, the design to feel fun while playing, and all of the little details in between to be polished up."

Inspiration comes from a number of places, including both modern vehicles and concept cars. Nollan also has a soft spot for the DeLorean, which has crept into some of the designs. And since it’s not really clear whether or not all of the vehicles actually have a driver behind the wheel, there are also nods to robots and other machines. The result is a line-up of vehicles that feels somewhat plausible while still being satisfyingly futuristic. The team isn’t saying just how many cars you’ll be able to take control of, but it will definitely be more than the handful that were available in Nitronic Rush. There’s also no word yet on exactly when the game will be available, though Kickstarter backers can expect to check out Distance’s beta sometime next summer.

And what kind of insane energy source do these sci-fi racers run on, anyway? "Let’s just say that it takes an incredible amount of power to handle rocket propulsion from several different thrusters, and also enough power to instantly launch the vehicle straight up into the air," says Hemenway. "There are only so many power sources that can provide that much energy."