Share All sharing options for: One small hotel's long nightmare with Expedia (update)

The Luna Blue Hotel is a small 18-room hotel on Mexico’s Caribbean coast across from the island of Cozumel, known for its friendly service, proximity to the beach, and resident fat tabby cat, Frankie. It is popular and rated highly on travel review sites. According to the ubiquitous online travel agent Expedia, the hotel is in such high demand that it’s booked through the end of 2013. "Luna Blue Hotel is sold out," the site informs would-be guests.

In reality, the Luna Blue Hotel has plenty of availability — it's just that owners Cheri and Tony Head are the victims of a long nightmarish saga with industry monolith Expedia that ended with the hotel’s page frozen in purgatory. And because of Expedia’s strong search engine ranking and its vast network of affiliated sites, the rumor that the Luna Blue is sold out has spread around the web.

"We’re getting emails from people saying, ‘you know, we’re so sorry you were booked for that time, I booked another hotel,’ and we’re writing back, ‘we’re not booked!’" Tony Head told The Verge.

Luna Blue says it has lost out on the bookings it used to receive from Expedia, as well as customers who would normally book directly with the hotel. "A lot of people go to Expedia to check out the hotels before going to them directly and booking," Head said. "Our concern now is the loss of our regular reservations that people are not booking with us because it's all over the internet that we're full."

The Heads forwarded dozens of emails between themselves and Expedia, which painted a picture of a large bureaucratic organization in which a small Mexican hotel was not exactly a top priority.

According to the couple, Expedia has been unresponsive to phone calls and emails since October. When asked for comment on the case, Expedia demurred. "Expedia holds partner negotiations as confidential, but can confirm Luna Blue hotel and Expedia are no longer working together," the company said in a statement.

The Heads first listed the Luna Blue on Expedia in October of 2011. Tourism in Mexico had been suffering due to bad publicity from swine flu and drug violence. Javier Polanco, the local manager for Expedia at the time, told the Heads that the online travel agency could help them reclaim the lost business.

For most large hotels, Expedia typically buys a block of rooms at a deep discount and resells them at its discretion. For small hotels, Expedia acts more like a travel agent, booking rooms on behalf of customers and charging hotels around 25 percent commission.

There were problems from the start, as the Heads felt the pain of dealing with a service which is really built around large hotels. The description of the Luna Blue on Expedia included major errors, Tony Head told The Verge, such as listing the wrong number of beds in a room and advertising that the hotel has a health spa on site, which it does not. This resulted in more than a few irate customers.

Expedia’s faceless content department would sporadically correct one error, Head said, only to write in a new mistake. The couple forwarded multiple email chains with Polanco and his successor, Judith Monroy, detailing errors in the listing. A typical subject line: "Luna Blue Hotel description in Spanish - is incorrect - SENT IN REQUEST 12 WEEKS AGO."

The Heads were told by Polanco that some of the problems were due to the fact that Expedia’s system is built for large hotels, and the information for a small hotel doesn’t fit neatly into the template.

Despite the errors, the couple was happy with Expedia

Despite the errors, the Heads were happy with Expedia. The site boosted bookings by about 10 to 15 percent during the periods when the Luna Blue had been hurting, they estimated, and they were able to pacify most of the customers who were irritated at the lack of health spa and other discrepancies.

Then in August of 2012, the images and room descriptions on the Luna Blue’s Expedia page suddenly showed up blank. The reservations stopped. Expedia’s reps told the Heads there was nothing they could do. Head claimed that he tried to cancel their contract with Expedia, but Polanco said it had automatically renewed and they would have to wait another year to get out.

After weeks of frustrating and increasingly desperate exchanges, Head demanded to speak to a superior. He received an email from Pablo Castro, director of Mexico for Expedia, on October 3.

"This conversation has reached a level that is not healthy," Castro wrote, promising "to disable the hotel, as it is clear that you are not satisfied with the level of service." He offered to meet with the couple in Cancun. However, Head said, the director never responded when they asked when and where. After sending repeated emails, the couple gave up on Castro in mid-November.

Expedia never disabled the Luna Blue’s page. In fact, the images and descriptions magically started working again within a few days, Head recalled. "It was like, okay, finally they got the message! They fixed the links, this is behind us," he said. The sense of relief was short-lived. "Then we get an email from someone saying, ‘why did you cancel my reservation?’"

Expedia had apparently canceled all of the Luna Blue’s reservations

Someone at Expedia had apparently canceled all of the Luna Blue’s outstanding reservations, including those that predated the dispute, Head said — without notifying the hotel. To add insult to injury, Expedia’s collections department then sent the Luna Blue a notice saying the hotel would be responsible for paying "relocation fees," the penalty Expedia extracts when a hotel accidentally overbooks and can’t accommodate an Expedia customer.

Deanna Cavallero was one of the customers who had reserved through Expedia. Before her trip, she received an urgent email from an Expedia rep: "Unfortunately the hotel is unable to accept your reservation for your upcoming stay." Cavallero even spoke with an Expedia rep who reiterated that the hotel had no availability and tried to rebook her somewhere else. It was only when she emailed the Luna Blue directly that she learned that rooms were in fact available. Cheri Head rebooked her personally.

The Luna Blue no longer shows up in a search on Expedia.com. However, a Google search for the Luna Blue Hotel shows its Expedia page on the first page of results — which of course says that the hotel has no availability, ever. The Verge also called Expedia’s 1-800 number and attempted to book that way; we were told the hotel has no availability through the end of 2013 and were encouraged to book at another hotel in the area.

Head believes Expedia is using the boutique hotel’s page to draw customers in and then push them to more expensive hotels after falsely claiming that the Luna Blue is sold out. 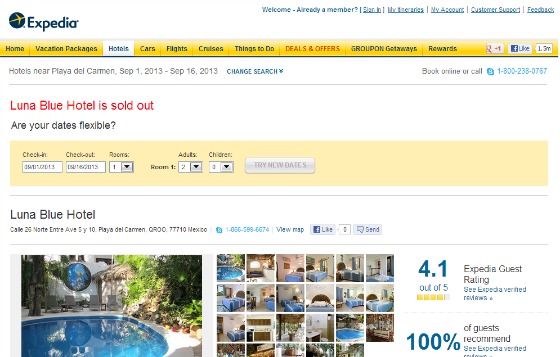 A search for rooms on Expedia on any date shows no availability, even though the Luna Blue says it is not sold out.

The Verge could find no evidence that this is a widespread problem for hotel operators. But in 2011, Expedia and its then-subsidiary TripAdvisor were hit with a €367,000 ($486,000) fine in France for misleading marketing, which included, among other things, "Displaying a hotel as ‘full on requested dates’, when in fact rooms were available, and suggesting other nearby available properties having better commercial terms with Expedia."

Expedia’s reach, which was billed to Luna Blue as part of its value proposition, extends to dozens of sites including Hotels.com, "currently available in over thirty languages and dedicated to offering you global exposure," and its Chinese affiliate eLong. For the Heads, the ubiquitousness that used to be a perk is now a curse. Just yesterday, the Luna Blue was solicited by an online travel agency called Rovia — which also sources its data from Expedia and had the hotel listed as unavailable.

The hotel has lost out on thousands of dollars worth of canceled reservations, on top of the bookings they believe they would have received if Expedia had not misled customers into thinking they were sold out. To combat the problem, they’ve added a 10 percent discount for TripAdvisor customers who book directly through the hotel. They’ve also filed complaints with the Federal Trade Commission and local agencies in Mexico.

Tony Head, who was a trial lawyer in San Francisco for 30 years, concluded that pursuing legal action against Expedia would be prohibitively expensive.

As a last-ditch effort, the Heads wrote a blog post about the whole ordeal and posted it in early December. On Christmas Eve, the post went viral. First, it got picked up the All Annapolis Facebook page, then it got on the forum Hacker News, and then on Reddit. "And then people just started retweeting and retweeting and retweeting," Head said. The post, "Expedia: Bad for the Traveler, Bad for the Hotel," has had more than half a million views.

He and his wife were genuinely touched by the goodwill of strangers, he said — and who knows, maybe all the publicity will lead to a few bookings.

Expedia partners with hotels to capture bookings across the globe through technology, diverse brands, powerful marketing, and market insight. We are confident in the value that we offer our more than 160,000 hotel partners including over 300 properties in the Riviera Maya region. It is very unfortunate if any partner is unsatisfied with our services. However, we strongly believe that our growing relationship with such a large number of properties is a testament to our trusted capabilities and the professionalism of our Market Managers.

"Frankly at this stage, all I want is them to take me off their page," Head told The Verge. "I just want people to, when they look for the Luna Blue, I don’t want them going to Expedia and seeing that there is no availability. That is the only thing I want in the world."

Update: After this article came out, Expedia blocked the page for the Luna Blue Hotel so it's no longer visible to most users. However, the site is still accessible by search engines and is still visible with Javascript disabled. Sites like TripAdvisor that rely on data from Expedia and its subsidiaries still list the hotel as having no availability.