The Census Dotmap contains one black dot for every person in the US, and nothing else

Share All sharing options for: The Census Dotmap contains one black dot for every person in the US, and nothing else

There are 308,450,225 dots on the map you see above. One for every person living in the United States, based on data from the 2010 Census. It doesn't seem plausible when you're looking at the entire country; metropolitan areas seem to be represented by indistinct swaths of black rather than tiny dots. But zoom in and even the most populated cities are finely broken down. There are no state borders, city lines, or individual roads represented on the Census Dotmap, as creator Brandon Martin-Anderson calls it. Nor is there any topographic data integrated here, yet the exhaustive reference still manages to offer a good sense of areas where nature prevents settlement. In fact, it lines up wonderfully with stunning imagery of Earth at night recently released by NASA. 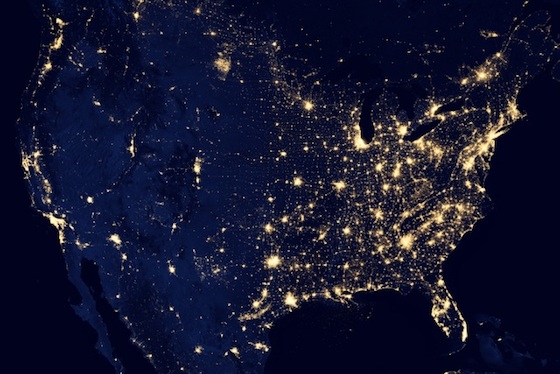 It may not be flawless — according to the map, there are people living full time in New York City's Central Park, for instance. However, Martin-Anderson says the Census itself is responsible for any irregularities. He's merely wrapped everything into a stunning presentation.