Popular Twitter-based photo service TwitPic is currently being blocked by Google's malware checker. Upon trying to access TwitPic.com, the service's Twitter page, any Twitter page containing a TwitPic, or any webpage with a TwitPic widget, users are presented with a "Malware Ahead!" warning that urges them to turn back. The site is currently listed as "suspicious" by Google's Safe Browsing tool, even though it also states that suspicious content hasn't been found on the service in the past 90 days. TwitPic responded to the situation on Twitter, saying that it is currently trying to contact Google to remove the malware warning because "it is not true." We've asked Google and TwitPic to provide more information on the cause of the disruption.

Thanks to everyone who sent this in! 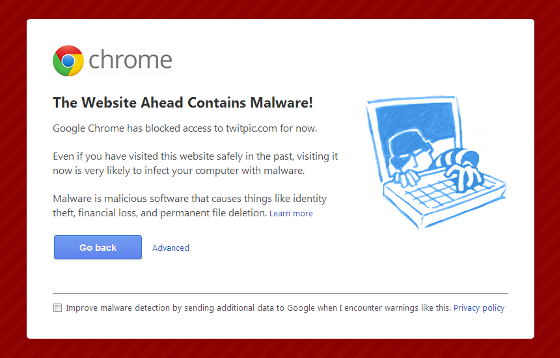 Update: It appears that TwitPic has been unflagged by Google's malware scanner and that the service is back to normal. TwitPic tweets that Google responded to its inquiry regarding the malware warning, and that the block has been removed as of 8:09PM ET. We'll let you know if Google or TwitPic offer any further explanation for the warning, but for now, it seems like a false alarm.

We've heard from Google and they have removed the block. Access to Twitpic should be restored...